Planet Zoo is a fantastic zoo management game that I wholeheartedly recommend, whether you’re looking for some Zoo Tycoon nostalgia kicks, or simply love animals. It’s admittedly not a massive leap forward from previous zoo games, but the conservation focus and gorgeous visual polish revitalises the genre for modern audiences

I’ve been waiting for Zoo Tycoon 3 for 16 years. Despite the many ports to modern consoles and handhelds, a true successor sadly never arrived to propel the series forward and satisfy my nostalgic itch. But then Planet Zoo arrived.

Planet Zoo is everything you could wish for from a Zoo Tycoon successor, even if it isn’t strictly a sequel. It’s certainly in safe hands though, as it was developed by Frontier Developments – the team responsible for bringing RollerCoaster Tycoon’s spiritual successor to the modern masses with Planet Coaster.

Remaining true to its roots, Planet Zoo has the same therapeutic charm as its Tycoon predecessors. Soothing music plays in the background, swelling to a motivating crescendo when you start to shape out a creature’s enclosure.

This is a slow-paced experience with few challenging difficulty spikes, but seeing your zoo expand from a small park to a sprawling animal wonderland is so rewarding that it’s difficult to quit the addiction – I’ve played over 50 hours so far, and I’m still coming back for more. 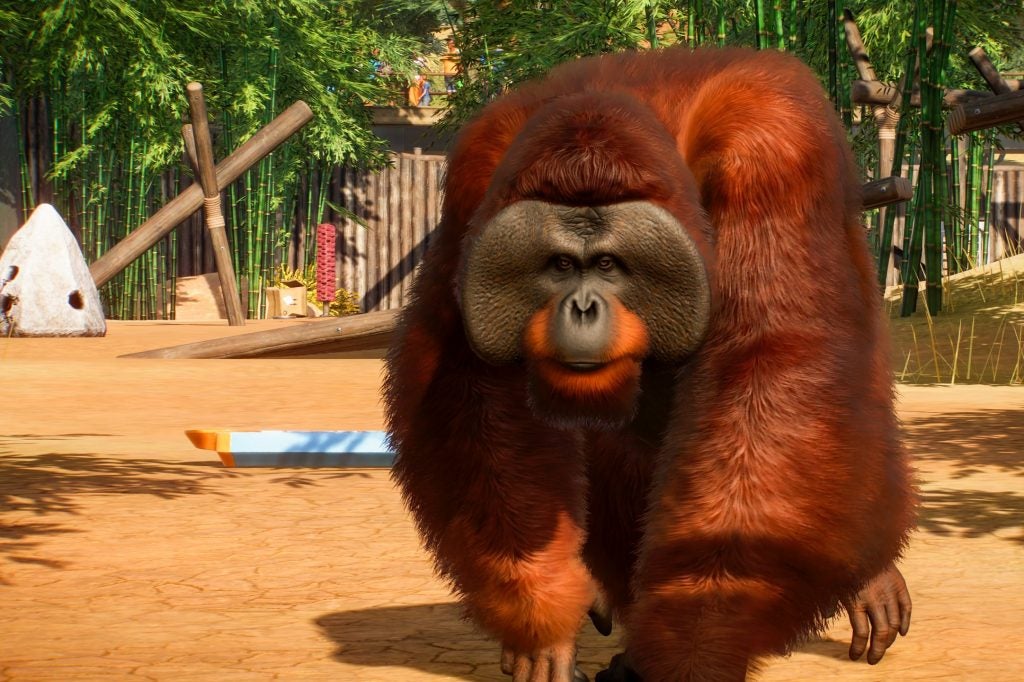 The stunning animal animations are a big contributing factor to my Planet Zoo obsession. There are over 50 beasties available, and all have photo-realistic models with breathtaking attention to detail. Zoom up close and you’ll be able to see the single strands of fur on a grizzly bear, while a greater flamingo will be born with grey feathers and only turn fluorescent pink in adulthood – Frontier Developments has certainly done its homework.

There are some notable animal omissions, though – penguins, kangaroos and sea lions are all missing. It’s hard to be too critical about this, however, considering the number of critters included – plus Frontier Development has already started introducing expansions to plug in the gaps, with polar bears and reindeer introduced by the Arctic Pack.

It’s not just the visuals where Planet Zoo excels – each animal also shows impressively realistic behaviour. Red pandas scramble up trees, wolves form social hierarchies and hippos tread ground underwater. Frontier Developments has even created a zoopedia, which thoroughly details each animal’s social needs and habitat requirements. This comes in handy to avoid accidentally creating a gender imbalance in a habitat, which can lead to injury-inducing brawls. 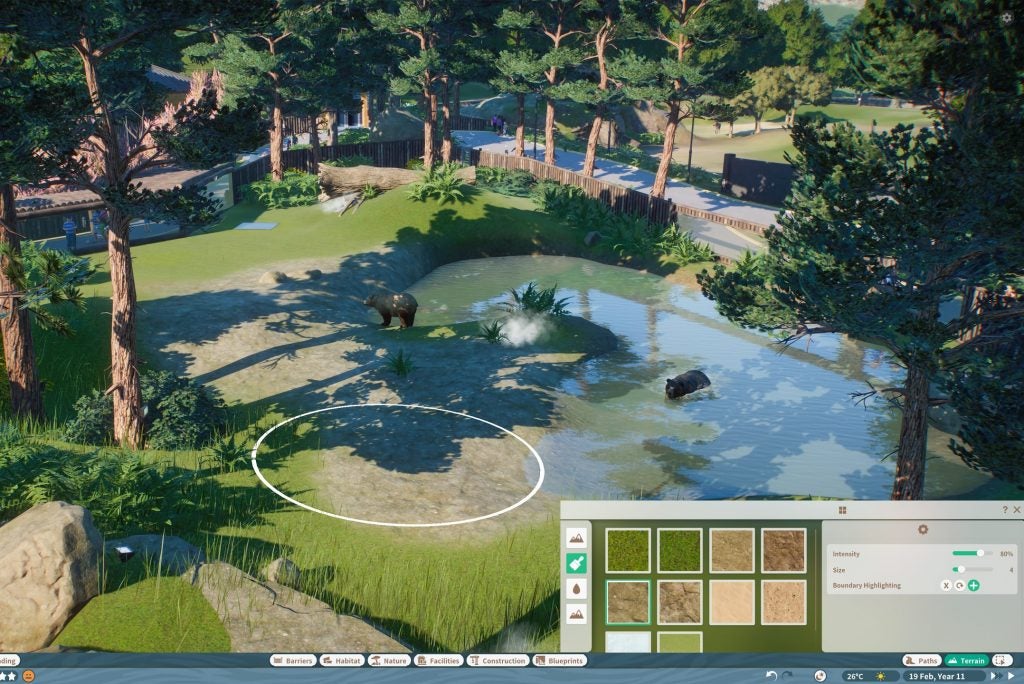 Otherwise, creating exhibits to fulfil the needs of your animals is very easy, simply requiring you to implement the correct terrain, plants and shelters until all the slidebars lock into the green zone. The most difficult aspect of maintaining high animal welfare standards is ensuring exhibits remain clean and disease-free, but that’s just a case of having enough keepers and vets on duty.

Keeping your guests content is a far more taxing task. They’ll constantly demand more shops, complain about litter and bemoan the lack of educational content. It can be difficult to meet their demands – especially the latter – and frustratingly shifts the focus away from the animals.

Frontier Development offers control over even the most granular elements of your zoo. From assigning jobs to your staff to altering the prices of soda in the burger kiosks, every little detail can be fine-tuned to your liking. This makes it all the more rewarding when you create a zoo with soaring profit margins and customers singing your praises. 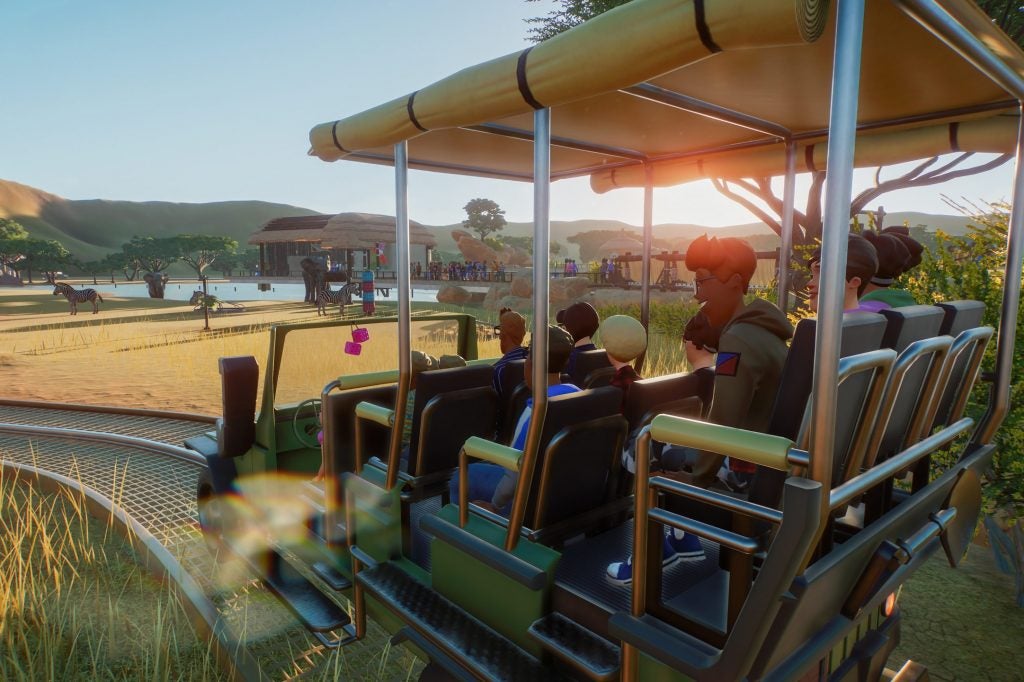 It’s admittedly not very tough to rake in millions of dollars, though. Spend too much money early on and you’ll likely see profits take a nosedive into the red zone, but take it slow and steady, and you’ll eventually have a seemingly bottomless pot of cash. This does remove a lot of the challenge for your zoo expansion in the latter stages of play, but Frontier Developments has introduced an interesting mechanic to counteract this.

No matter how rich you are, you can’t spend your cash on certain rare animals such as African elephants and western chimpanzees. Instead, you need Conservation Credits, which are gained by releasing healthy animals into the wild (bonus points for endangered species) and interacting with other players online.

This is a very smart addition, as it not only helps Planet Zoo become more complex but also makes you feel all warm and fuzzy for making a positive impact on this virtual world. Alongside the graphical jump, the conservation angle is the main differentiation from the old Tycoon games and helps to give Planet Zoo a modern gloss in a time when the focus on animal welfare is becoming more and more prevalent.

Furthering this theme, if you neglect your animals too often or cram them into claustrophobic cages, you’ll start to see protesters turn up in droves. The Career story mode vilifies cash-grabbing companies, and always prioritises the wellbeing of your animals in even the most cash-centric challenges. 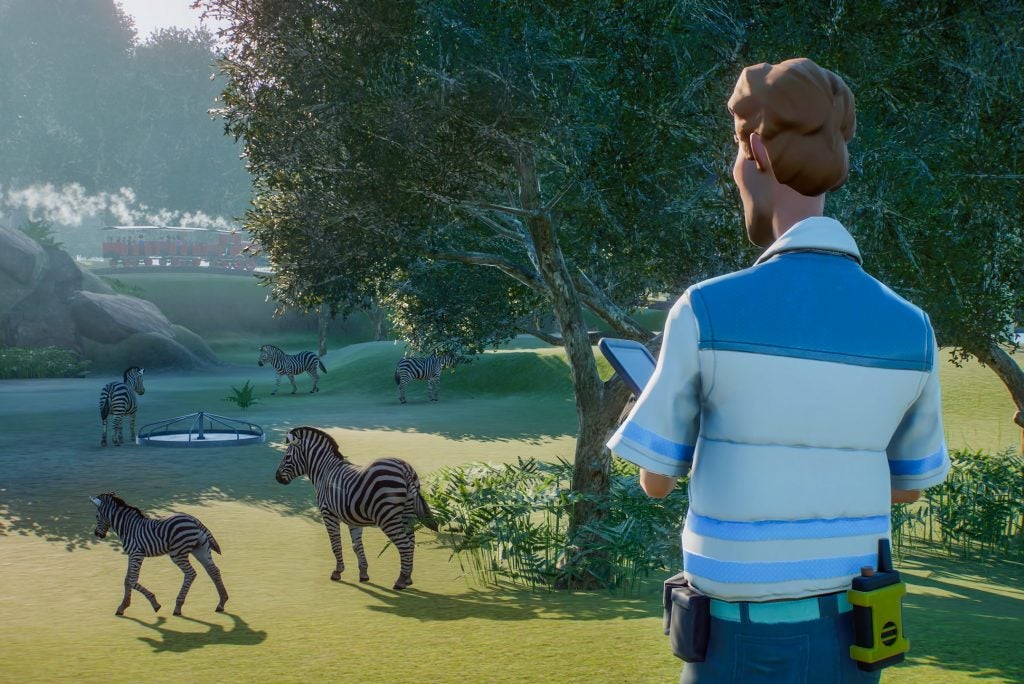 If you’re really not bothered about the financial side of the game, the Sandbox mode gives you an unlimited supply of cash to build the zoo of your dreams – though, without the worry of cash flow, Planet Zoo becomes significantly easier to play.

Franchise mode allows you to build a zoo from scratch by buying and selling animals with other players online. Frontier Developments also frequently introduces new community challenges, which are great opportunities to guzzle up those Conservation Credits.  There’s a good offering of game modes here – my personal favourite is Career, which does a fantastic job of teaching you the ropes of building a zoo.

It’s not all good at Planet Zoo, though, with as many bugs plaguing the experience as there are crawling over a chimpanzee’s hide. Multiple crashes forced me to restart from previous save files, while other issues included keepers neglecting to replenish animals’ food bowls and objects stubbornly refusing to be placed on elevated platforms.

And, while the education system is a welcome addition, it’s pretty tedious placing educational boards and speakers in every corner of the zoo in order to please guests. I feel Frontier Developments needs to introduce some new features to help boost your education level, with tour guide staff an obvious solution. 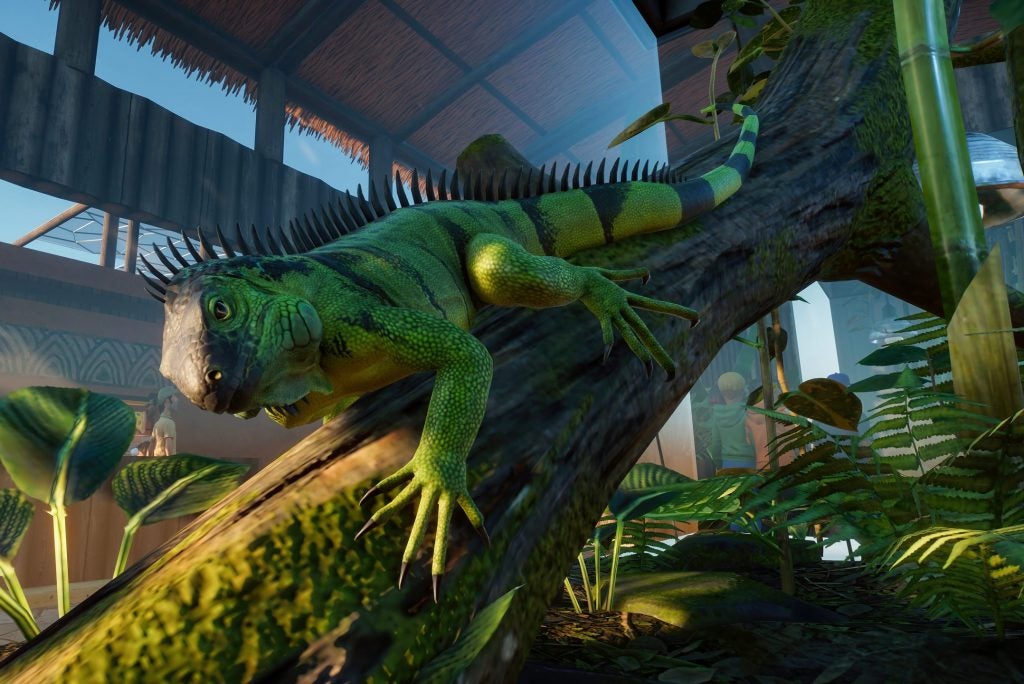 Should you buy Planet Zoo?

Frontier Developments has struck the perfect balance of complexity for Planet Zoo, never overwhelming newcomers to the zoo management genre by going too deep, but providing enough nitty-gritty features to allow total control over your park. A slew of different modes also allows for different play styles, whether you want to be faced with story-centric challenges or fancy the financial freedom to create the zoo of your dreams.

Not a whole lot has changed since Zoo Tycoon’s heyday in the early noughties, but a massive graphical leap and a greater focus on animal conservation keeps the zoo management genre relevant for modern audiences.

Persistent technical issues and an overly demanding education system prove frustrating flaws, but Planet Zoo still offers a hugely enjoyable experience that can be regarded as highly as the original Zoo Tycoon entries it succeeds.