If you really, really love films, you’ve probably at least entertained the possibility of rigging yourself up with a front projection system. After all, this is the only way you’ll be able to get at home a picture size that can really deliver the same sort of vision-filling cinematic impact you get at your local Odeon or Showcase.


But having entertained the front projection possibility, you’ve also most likely dismissed the notion, at least partly on the grounds that front projection systems just don’t tend to be very practical for most domestic environments. Not least because in order to get any kind of decent performance out of such a system, you need to have the room it’s based in left in near-perpetual darkness.


Today, though, we have sat before us a really innovative solution to this ‘must have darkness’ problem in the form of the Xscreen Monaco 80: an 80in projection screen especially designed to be usable in ambient light. Intrigued? You should be. 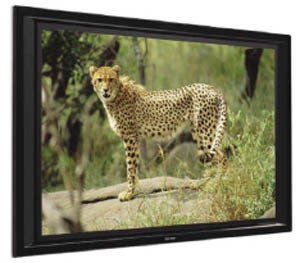 As you might imagine, there’s really very little about the Xscreen Monaco 80 that you might describe as ‘normal’ by the standards of front projection screens. For starters, where most screens look merely functional, the Monaco 80 is a genuinely rather gorgeous looking thing. It’s a ‘rigid’ design (rather than one that unrolls), but its outstandingly robust, high gloss frame is a huge improvement over the cheapo felt or plastic frames most rigid designs employ. You can even choose whether you want the frame in white or black, and the screens are also available in 60in, 70in and 100in sizes.


By far the most significant factor in the Monaco 80’s design, though, is the fact that the screen itself is not made from your typical flexible screen fabric. In fact it’s rock hard – which probably has something to do with the fact that it’s made from a 4mm layer of hardened glass…


Glass, of course, is hardly the first material that springs to mind when you’re thinking about projector screens. In fact, aside from the fact that it makes for a perfectly flat surface, it’s difficult how to imagine that glass could offer a remotely suitable projection surface at all.

The trick, of course, is that the Monaco 80’s glass has had a secret ingredient added: something it likes to call Daytime Film Technology. DFT, as it shall henceforth be known, involves applying a thin layer of ‘special’ material to the glass layer that has been specially designed to accurately reproduce the picture from your projector while also eliminating reflections from other light sources such as windows or lamps. It’s this filtering out of reflections in particular that gives rise to the Monaco 80’s claims that it can deliver perfectly watchable projection results even with the lights on.

In fact, so confident is the Monaco 80 about its ability to be used in a typical living room environment that it even offers a (£900 extra) ‘TV’ option comprising an additional AV ‘hub’ or switching box that’s either external or built into the screen.

This hub has its own built-in TV tuners, and sockets for attaching your AV source gear. Then a single cable can carry video from the switchbox to your projector.

An extra benefit of the TV box is that it allows you to control potentially your entire AV system via one remote. What’s more, impressively the switchbox comes equipped with Pixelworks video processing, so that you can scale the image it outputs to suit your projector’s resolution.


So much for the theory: does the screen really deliver on its outrageous ambient-light promises? You know what? It really does.


I actually started off my tests, though, by checking if the Monaco 80 was actually any good as a ‘proper’ screen running in a darkened room. And I’m happy to say it is. I was hugely impressed by the white balance and colour tone it produced with a Sky HD broadcast of Steven Spielberg’s Munich, for instance. In fact, at times the image took on an almost luminous quality that really reminded me to an uncanny degree of the experience of watching a film at a real cinema. 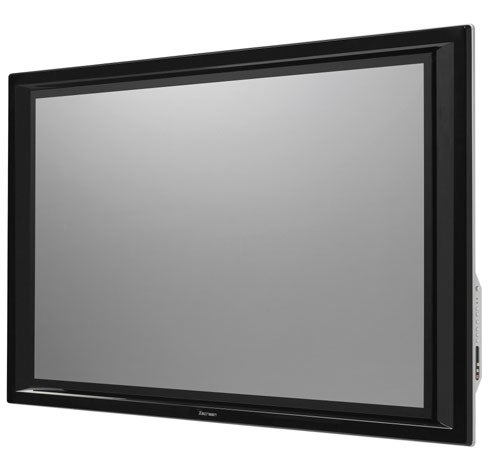 The Monaco 80 also showed a perfect touch with detailing, especially as it avoids the common trap some (especially PC oriented) screens fall into of overcooking the sharpness until the picture looks noisy or bitty. It’s clear already that the Xscreen is made by film enthusiasts, for film enthusiasts.


Also remarkable is how little unwanted ‘bounce-back’ the screen puts out. With many screens, the light from the projector can be refracted out from over quite a wide angle, causing bright reflections on your walls and ceilings, which can really reduce the black levels you see on the screen – unless you happen to be a Goth-head with a complete black felt-covered room. But the Monaco 80 somehow manages to keep the reflected light remarkably focussed straight back out at you, rather than spilling it all over the room.


This helps the Monaco 80’s picture look exceptionally bright for a dedicated home theatre screen. Yet crucially this extreme brightness has seemingly been achieved with only the slightest compromise to black level performance.


Seriously, the amount of light the Monaco 80’s screen just seems to soak up and hide away has to be seen to be believed. And the brightness of the picture still comfortably overwhelms the brightness in the room.


Naturally there’s a limit to how far you can take this; while pretty much any daytime shots or decently lit interiors are constantly easy on the eye even when viewed in ambient light, some of Munich’s darker scenes do start to look rather faded and flat. But of course, the chances are that the stuff you’ll predominantly want to watch in ambient light will actually be daytime TV, most of which is ludicrously bright and so will hold up just fine on the Monaco 80’s remarkable surface. 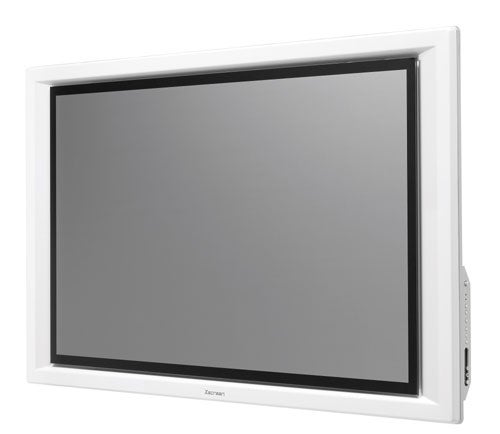 There are a couple of areas where you have to accept small compromises in return for the Monaco 80’s daylight talents, mind you. As I hinted earlier, the screen’s black level response isn’t as profound as that of a high quality fabric screen. Plus although I enjoyed it, I can imagine that some people might not warm to the picture’s almost luminous quality, preferring instead something a little more flat and neutral.


While the compromises I mentioned at the end of the review might be enough for a real movie purist to dismiss the Xscreen Monaco 80, that doesn’t alter the fact that it is, in my opinion, a work of genuine genius. It delivers on its revolutionary ambient-light-use claims spectacularly well, and looks divine into the bargain.


I guess another potential stumbling block could be the Monaco 80’s price; at £1,400 (or £2,300 with a scaler and TV tuner) it’s hardly cheap by 80in projection screen standards.


But even here, if you consider how its ‘daytime’ design opens up the possibility of the screen in conjunction with a projector becoming a genuine replacement for your TV, the price suddenly doesn’t look so bad. After all, couple an 80in Monaco with, say, the superb InFocus IN78 projector, and you’re looking at a total spend of £2,900 (or £3.8k with the optional media box) – a price which actually compares very favourably indeed with what you’d currently have to pay for an 80in plasma or LCD TV.