We’re often struck by how few American brands manage to make their mark in the UK’s AV scene. The dominance of European and far Eastern brands is almost total, which inevitably raises questions of whether perhaps US brands just don’t understand the quirks of the UK market as well as they might. So here’s hoping the first UK product from American outfit Planar, the PD7010 entry-level DLP projector, puts such questions to bed in no uncertain terms.


It looks like it means business, at any rate. Its high-gloss black finish wrapped around a delightfully curvaceous and reasonably diminutive body is tailor made to look good on a coffee table, suggesting that Planar knows the sort of design ethic that the UK domestic market loves. 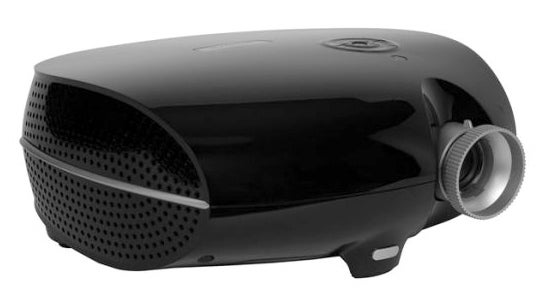 So home-friendly are its looks, in fact, that it comes as something of a surprise to learn that Planar sees the PD7010 as an affordable option for the custom install market. But you certainly can buy the projector yourself without having to go through third-party installers, and really the only thing in its specification that marks it out as a custom install option are a trio of system-friendly sockets: an RS232C control jack, a USB input, and a 3.5mm IR jack. Neither its onscreen menus nor setup procedures contain any technicalities too specialised for even a projector novice to negotiate with reasonable ease.


Indeed, the PD7010 is perhaps a touch TOO easy to set up, since it doesn’t carry any vertical image adjustment – a tool we always find helpful when trying to get a projector image correctly positioned on our screen. What’s more, the amount of optical zoom provided by the lens isn’t great, meaning you need to check that the PD7010’s throw distance figures will work OK for the size of room it’s going in. All the other set up features that count are present and correct, though, including vertical and horizontal keystone correction for making sure the image’s edges are all straight, plus all manner of handy picture tweaks within the well-presented onscreen menu system. 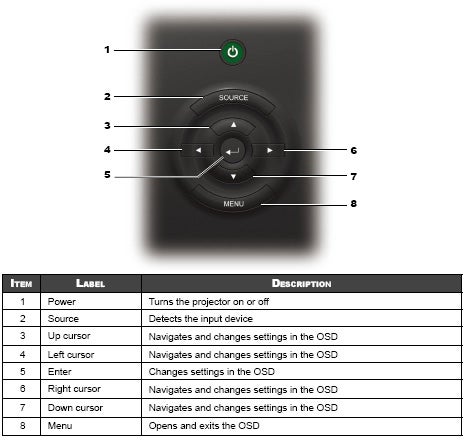 Among these tweaks are a colour temperature adjustor (6500 Kelvin should see you right for most home cinema applications); a white peaking adjustment; three lamp output modes depending on whether the source you’re watching demands an emphasis on black levels or brightness; five gamma presets for adjusting contrast levels to different source types; and offset and gain adjustments for each of the image’s red, green and blue colour elements. This all represents some really impressive flexibility in a projector costing as little as £1,100.


One downside of having so many picture adjustments at your disposal is the constant optimisation of the settings for different sources. But Planar has covered that too, by providing three save-to-memory options where you can store different image setting groups.

At the PD7010’s optical heart is a Texas Instruments Dark Chip 2 DLP chipset, delivering a native pixel count of 1,280 x 720 and a decent claimed contrast ratio of 2,500:1. If you’re used to seeing figures of 10,000:1 and more being quoted by LCD projectors and so don’t think the PD7010’s figure looks up to much, you should note that the PD7010’s contrast figure is a ‘true’ one that does not, as is the case with LCD, depend on reducing the projector’s brightness output during dark scenes to deliver deeper black levels.


When it comes to connections, the PD7010 surpasses our expectations for its price point by providing two digital video inputs, one HDMI and one DVI (that can do HDMI via a supplied adaptor). Plus you get component video inputs, a PC jack and a 12V trigger output for automatically kick-starting mechanical screens, alongside the custom install ports we mentioned earlier.


Unusually for the DLP home cinema projector market, Planar hasn’t turned to any third parties such as Faroudja or PixelWorks for the video processing inside the PD7010. Instead it’s chosen to stick with a custom-tweaked version of Texas Instruments’ own DDP3020 engine. Any concerns raised by this decision are quickly put to bed by the projector’s remarkably assured performance.

Impressing immediately during a run-through of the first Pirates of the Caribbean movie on Blu-ray are its black levels. The night-time scenes of Captain Jack in jail look surprisingly dark and credible, with less of the poor-contrast grey mist effect than expected for this price. We’ve honestly seen projectors costing double produce far less impressive reproductions of black.


Colours, meanwhile, generally benefit from good black levels, and so it proves here. The glossy and deeply under-rated visuals of Forza 2 on the Xbox 360 look impressively vibrant and engaging, but tellingly the projector also has a decent grasp of subtle skin tones – the sort on show in The Fellowship of the Rings’ dark Mines of Morir sequence.


DLP projectors are generally considered to fall short of LCD ones when it comes to showing fine detail, but the PD7010 does its level best to put paid to that argument with some very crisp HD pictures indeed. In fact, the sharpness during favourite ‘HD show off’ scenes like the opening space battle in Star Wars: The Revenge of the Sith (recorded from Sky HD) wouldn’t look out of place on a product costing nearer £3,000.

Another reason to savour the PD7010 is the quality of its motion handling, as the rapid action of Casino Royale’s early ‘Parkour’ sequence is produced with surprisingly little smearing and only the rarest trace of the sort of fizzing noise over skin tones that many DLP projectors suffer with.


A further common DLP problem that the PD7010 suppresses well is the so-called rainbow effect, where bands of pure colour flit about in your peripheral vision. The PD7010’s DLP colour wheel is clearly a cut above that of most similarly priced DLP offerings. 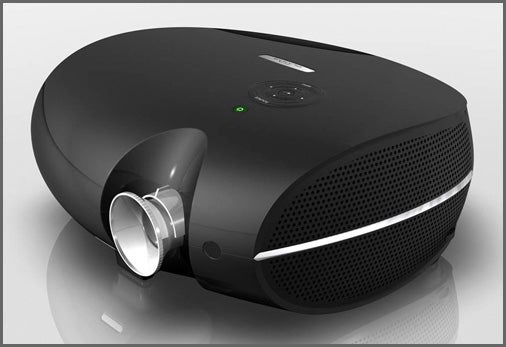 So does the PD7010’s performance betray any signs of its budget nature? Inevitably, yes it does. First, while black levels are remarkably deep for a £1,100 projector, they’re also a touch hollow, meaning that the darkest corners of the Nostromo during a run-through of Alien look just a little empty and flat. Also, while colours generally look the part, there are occasions where the odd unnatural tone sneaks in – particularly when watching standard definition.


Finally, while the rainbow effect and fizzing noise over skin tones are impressively well contained by budget DLP standards, you wouldn’t see either of them at all on an LCD model. But then an LCD model is unlikely to deliver the PD7010’s black level and colour response, and may also suffer with the so-called ‘chicken wire’ effect, where the picture shows artefacts derived from the structure of the LCD pixel array.


It’s a brave company these days which dares to dip its virgin toes in the harsh waters of the seriously tough UK AV market – especially at the budget end. Yet Planar’s debut doesn’t so much successfully join the budget projection market as redefine it.