Available on PS4 (version tested), PC
The PSP was always meant to be the console that bought the PlayStation brand’s biggest home console experiences to a handheld format. With games such as Metal Gear Solid: Peace Walker and God of War: Chains of Olympus, it did exactly that. Yet, for me, it will never be the scaled-down blockbusters for which I remember it; it will be PixelJunk Monsters.

With PixelJunk Monsters, Q Games took the tower defence game and transformed it into a weird, wonderful cartoon adventure. In the game, our masked hero – Tikiman – defended villages of Chibis from a ravening horde of beasties, transforming trees into giant-sized ballistae, cannons, AA guns and more. Like all the developer’s best efforts, it was simple but smart and maddeningly addictive. It was my go-to PSP game.

And now it has a PS4 and PC sequel, which brings Tikiman back to fend off a new bunch of monsters before they destroy his village people.

On first impressions, PixelJunk Monsters 2 doesn’t appear to have changed much. Your creepy-crawly, flappy-winged or stomping foes come towards the village along one of several routes, and it’s your job to ensure the right towers are in place to stop them. Fail, and your Chibis become a monster’s lunch. Your towers come in three basic types. One set targets only ground-based monsters, another only air-based monsters, plus a third set that’s reasonably good against both.

Within each set are towers with different properties and rates of fire; the more powerful they are, the more gold coins and gems you’ll need to purchase them. This means that, not only do you need to rush around putting towers in place to slay the monsters, but you also need to physically rush in and grab any loot they’ve been carrying.

Gems also have a secondary purpose: you can spend them to upgrade your towers. Just stand close to the target tower and press X to take them up another level, increasing their range, damage, area of effect and/or their rate of fire.

However, there’s also a free way to upgrade – through the medium of dance. Leave Tikiman standing next to a tower and he’ll groove to his favourite bongo music. As he dances, you’ll see the upgrade meter on the tower rise.

All this applies to the sequel as much as the original, but it’s the presentation that’s different. Where the original used simple 2D cartoon graphics, its follow-up is rendered in a 3D engine using some of the same stunning rendering techniques Q-Games deployed in its gorgeous but bizarre survival sim, The Tomorrow Children.

The models are intricately detailed and covered in luxurious textures. The reflective surfaces seem to gleam. Depth of field and lighting effects give the visuals the impression that they’ve been physically modeled rather than rendered. You might have played a few tower defence games back in the day but, trust me, you’ve never seen one that looks like this. 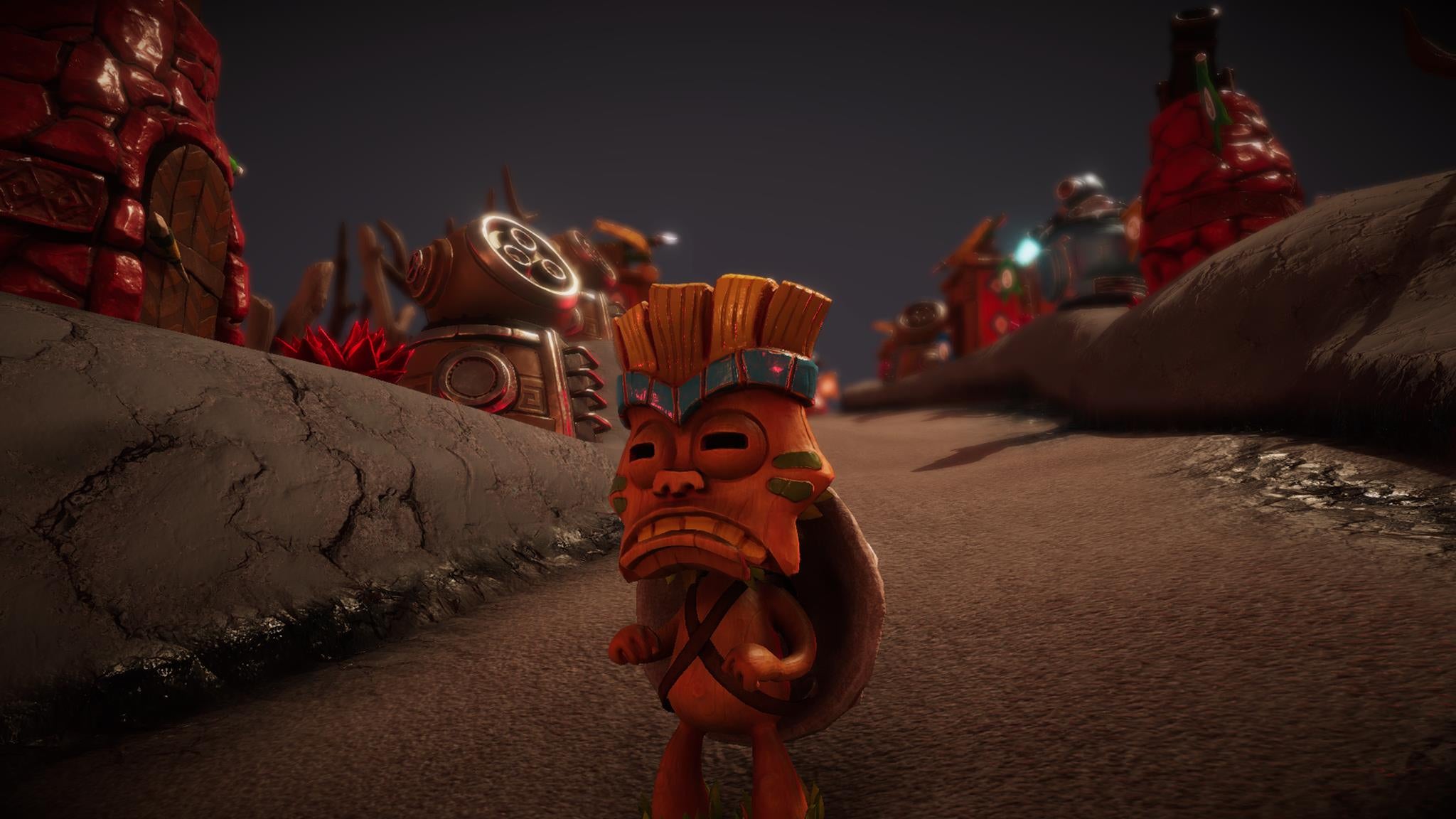 What’s more, you’re free to make the most of the graphics in a close-tracking third-person viewpoint, instead of the usual top-down isometric view. This doesn’t add anything to the gameplay – arguably, it makes it harder to track the location of monsters – but if you want to immerse yourself in the game’s strange world, PixelJunk Monsters 2 makes it worth your while.

At first I thought the shift to 3D was just a presentation thing, but the more you play the sequel, the more you realise that the topography of the landscape matters. Everything from the range of your towers to how coins and gems fall and how Tikiman gets around is affected by the rise and fall of the ground.

Every weapon – particularly the Cannon – becomes more useful if placed on higher ground. Hills and valley sides can block some weapons, making their positioning more crucial if you need to guard a certain area. Perhaps most crucially, Tikiman needs to jump to get up or over some obstacles, which is a big deal when his biggest advantage is that he isn’t limited to the monster’s pathways, but can take shortcuts through the wilds.

And best of all? Get up on a high vantage point and Tikiman can jump down and body-slam a mob of monsters down below. Sure, it isn’t something you’ll do all the time, but I’ve had one or two waves where this move has really saved my bacon. The same goes for pushing any heavy stone balls that litter the landscape (I didn’t even realise you could do this until playing co-op about seven hours in). 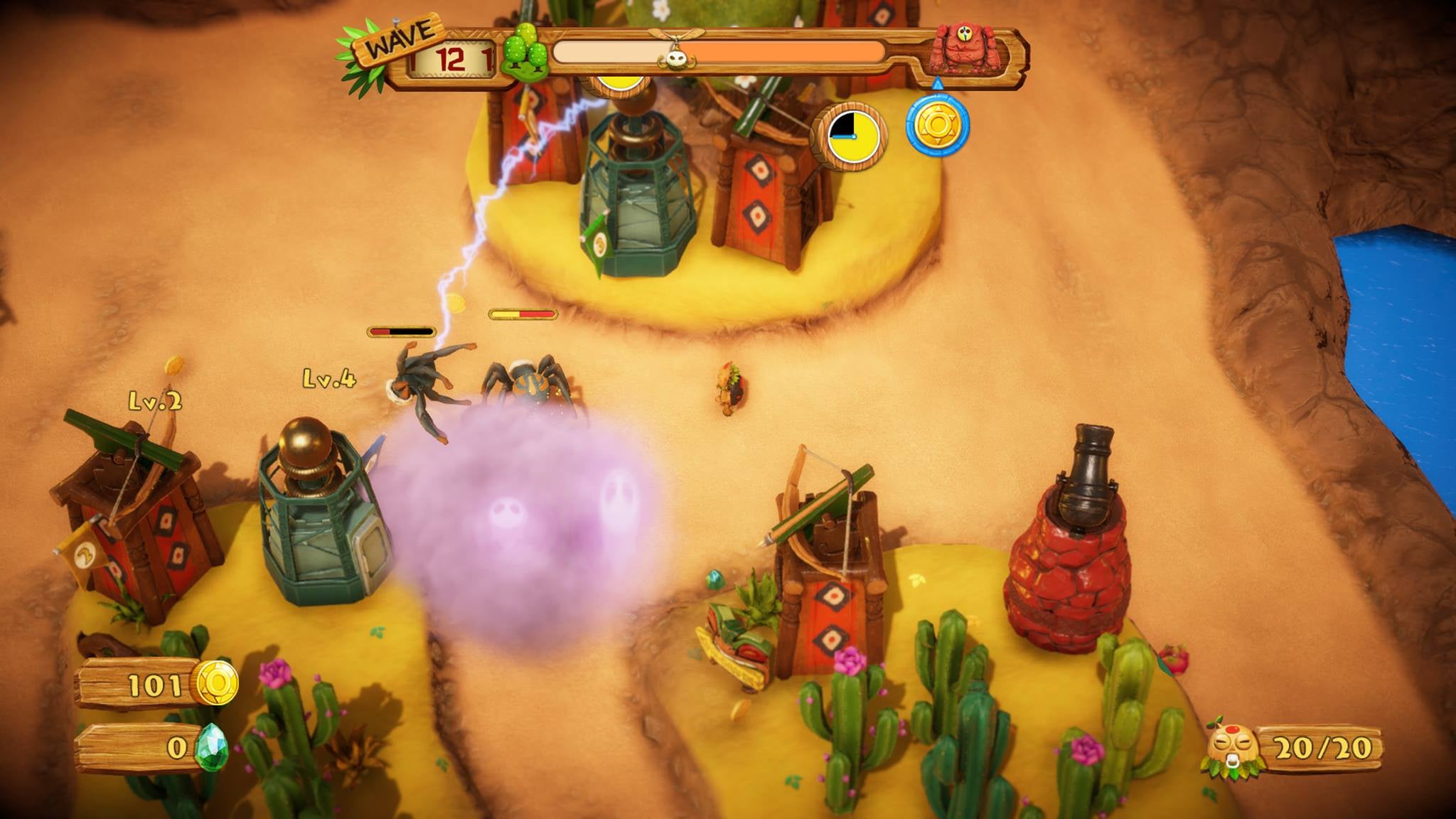 Sure, at heart this is just another tower defence game, but it’s elevated by the shift in perspective and by Q-Games’ constant, Nintendo-like drive to continue adding new ingredients to the formula.

First, the monsters start getting sneaky, taking alternate routes that you might not have prepared for (a poor air defence has been my undoing on many a level). Then, some come packing shields or fire and flame enhancements that require specific weapons or tactics to handle. You’ll get mobs that need to be slowed down so you can take ‘em. You’ll even find normally earthbound monsters floating in on colourful balloons.

Throw in levels where coins or gems don’t drop and you face some interesting tactical scenarios, with ingenious level designs that might take you a couple of cracks to get the hang of.

Like many great strategy games, PixelJunk Monsters 2 is partly a puzzle game. How do you stop the monsters with the tools at your disposal? What’s the best way to use your coins and gems to deal with the next situation?

Is it always fair? No. Perhaps my biggest bugbear about the sequel is that in order to unlock new areas you need to collect rainbow fragments. You do this by getting a perfect score, with no Chibi losses on each level, with different fragments available for each difficulty level.

This makes getting that perfect score a real priority, and could leave you weeping when, after 15 minutes of play, an airborne horde hits your defences and one little winged git gets through to turn a Chibi into breakfast. Inevitably, this results in a level of trial and error in the game, where everything hinges on how you tackle, say, wave 12 of monsters. 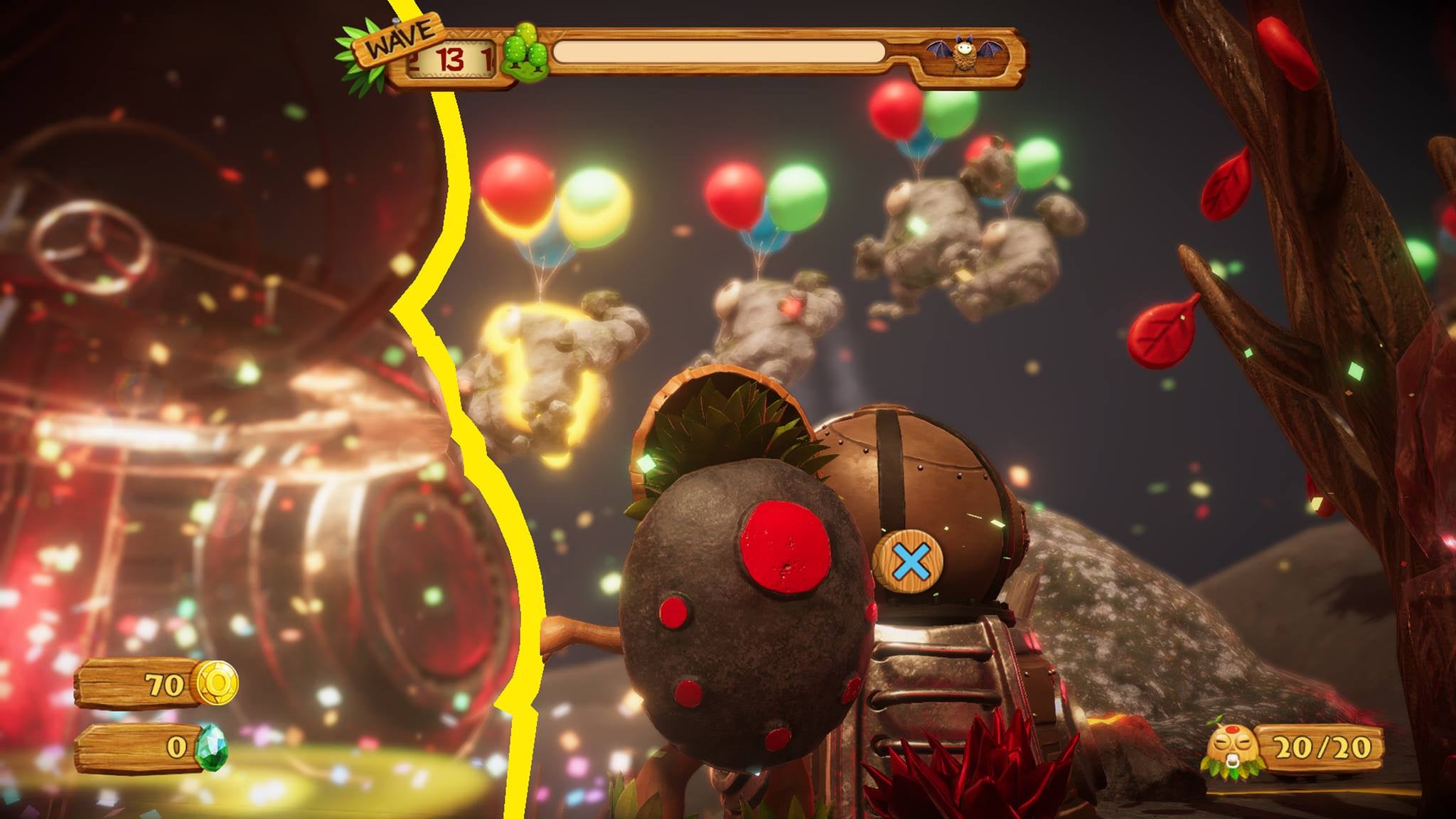 For a while, I railed against this and moaned that it was a cheap trick to extend the game’s lifespan. A few hours later, however, I’d decided that it made the game a decent challenge – one that probed your weaknesses and made you think about your strategy. Where the thought that the next go will be your ‘perfect’ go keeps you coming back for try after try after try.

This is what makes PixelJunk Monsters 2 one of those easy to pick up but impossible to put down games, and while it sometimes leaves me howling in despair, the goal always seems within your reach.

There’s four-player online co-op, although I wasn’t able to find anyone to play with on the servers pre-launch. Luckily, this hasn’t been the case with two-player sofa co-op, which is brilliant fun. Your secondary Tikiman is tethered to the main player, disappearing and respawning if they go too far away. It’s a great way to enjoy the more rushed levels, the panic rising as the monster hordes sweep in. Just bear in mind that any rainbow fragments or collectables won in co-op don’t translate to the single-player mode.

The loot you’re rewarded with for successful missions can be splashed out on custom masks and shells for Tikiman. As far as I can tell, these are purely cosmetic – but they’ll certainly help your guy to stand out in online co-op.

It’s a seriously beautiful-looking game, and Q-Games has found ingenious ways to make the translation to 3D work for, and not against, the gameplay. And it achieves all this without losing the heart and soul of the original.

It’s no epic, as reflected in the pricing, but PixelJunk Monsters 2 is a thing of joy and wonder. You’ll come for the visuals, get hooked by the charm, then stay for the hideously addictive gameplay.