If you’re looking for an AV receiver to pair with your new Blu-ray player then the VSX-LX51 offers all the features you need and then some. Pioneer tells us that many of its customers are buying this receiver together with the BDP-51FD Blu-ray deck and we can see why – not only do they complement each other aesthetically, but their well-matched feature lists also make them ideal bedfellows.

Design-wise, the LX51 is a class act. Dressed all in black, it boasts an understated elegance but the subtle blue lights inject a touch of hi-tech glitz. It’s covered in knobs and buttons, which makes it far from minimal, but because everything blends into the black fascia you don’t really notice the clutter.


There’s a well-sized display panel, which communicates all of the relevant info in a clear manner, such as the current sound mode or audio format. The dials on either side are for changing the input and volume level, and the panel of front connections includes composite, analogue stereo and optical digital inputs, a USB port and an input for the MCACC setup microphone (more on this later).

Like any AV receiver worth its salt, the back panel is teeming with connections. The inclusion of three Deep Colour-compatible HDMI inputs and one output is a definite highlight, and we like the fact that one of the inputs is specifically designated for a Blu-ray player. You won’t be stuck for digital audio inputs either, with three optical ports (and one output) plus two of the coaxial variety, plus you’ll also find 7.1-channel analogue inputs and more analogue stereo, composite video and S-video inputs and outputs than you’ll ever need. Elsewhere there are three sets of component video inputs (and one output), as well as a generous array of sockets for custom installation use.

To take the stress out of the setup procedure, the VSX-LX51 features Pioneer’s unique Advanced Multi-Channel Acoustic Calibration, which automatically tunes the sound quality to suit your room using a nine-band equaliser – simply plug the supplied microphone into the relevant port on the front and let the automated system do its thing. Incorporated into MCACC is Phase Control, which corrects frequency delay and aligns the phase within each speaker.


The VSX-LX51 musters 7 x 150W of power and supports every audio format under the sun, including lossless Dolby TrueHD and DTS HD Master Audio. It’s also THX Select2 Plus certified, which makes it best suited to rooms with a listening distance of between 10 and 12 feet, as well as ensuring that the product meets THX’s stringent quality criteria. 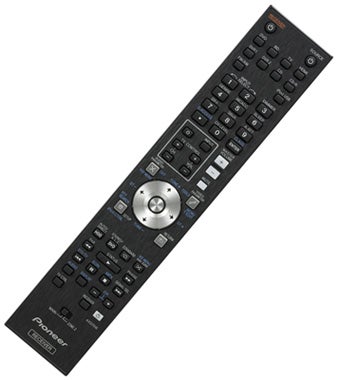 There’s also a staggering array of surround modes which can be used in conjunction with regular surround sound decoding, or to boost two-channel material up to 5.1. Highlights include a virtual surround back mode, which adds a phantom speaker between the rears, Advanced Cinema/Concert, which use signal processing to replicate different listening environments and Real Phantom, which creates a virtual centre channel for people who don’t want a centre speaker in their system.


But we’ve barely scratched the surface. The USB port on the front enables you to connect a portable audio player and listen to MP3 or WMA files, plus the Advanced Sound Retriever boosts the quality of these compressed audio formats. Additionally, if you don’t fancy rigging up rear speakers, the Front Stage Surround Advance mode generates virtual rears from the speakers positioned at the front of the room. Add other wizardry like Dialogue Enhancement and digital noise reduction into the mix, and it’s clear that the LX51 makes a formidable audio epicentre.


It’s also worth mentioning that despite its vast array of features, the unit is fairly easy to use. The setup menu can be viewed on your TV via the video outputs, and uses a crude-looking but straightforward menu system that enables you to make all the usual tweaks like assigning inputs or changing the sound settings. But if you’re not hooked up to a TV then you can use the front display. The remote is generally well laid out and you can navigate the basics with ease, but many of the buttons are labelled with confusing abbreviations that will take you some time to figure out.

With a Pioneer BDP-51FD connected to the LX51’s HDMI input, we played the Blu-ray version of ”300” and the Pioneer delivers a breathtaking rendition of its Dolby TrueHD track. It has the punch and power to turn the film’s brutal battle scenes into a truly visceral experience, with the clanking swords, furious effects and stirring score pumped out with real aplomb.


What’s more, the speed and drive with which it zips from effect to effect is stunning and makes for a truly thrilling listen, but it remains in steadfast control at all times. The soundstage never feels muddy or boxed in – it’s admirably open and expansive, and with more intimate dialogue-driven scenes, the Pioneer renders speech with effortless clarity. 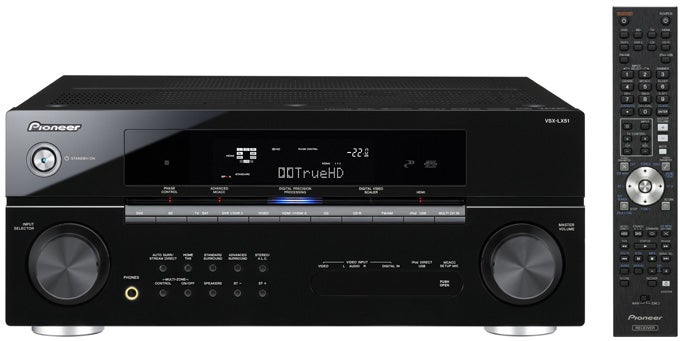 The LX51 ekes out every last bit of detail from the disc too, reproducing even the subtlest background sounds with pin-sharp clarity and adding an extra hint of gruesome detail to the sound of spears squelching through flesh. High-frequencies are amazingly crisp but never sound harsh or bright, while at the other end of the spectrum the bass is full bodied but extremely well controlled.


The LX51 is also tremendously musical, gracing delicate jazz CDs with a deftness of touch that you wouldn’t have thought possible after hearing it pound the hell out of ”300”. But it also does a classy job with up-tempo material like John Legend’s ”Evolver”, relaying its rhythms with plenty of vigour.


Pioneer has plenty of wildly expensive high-end receivers under its belt that deliver benchmark audio performance, but the VSX-LX51 is proof that the company can also work wonders at a lower price point. Film soundtracks sound fantastic, music is a real treat and the unit is packed with more features than you’ll probably ever use. If we’re being picky, we’re not convinced that the Pioneer shows enough of an improvement over cheaper amps like the Marantz SR6003 to justify the extra cost, but that’s a minor criticism – if you go for the Pioneer we guarantee that you won’t be disappointed.