Setting up the Pioneer VSX-923 is as complicated as you want it to be. If you hate the stress of speaker calibration then Pioneer’s MCACC auto setup will take care of everything for you, including channel levels, speaker distances, EQ and room correction. It’s a more thorough system than most and as such takes a while to complete, but the results are pleasingly accurate. You can view the results in the MCACC Data Check menu.

However, if you don’t mind getting your hands dirty, the setup menu offers all the tools you need to optimise the speakers manually, as well as network, input and HDMI options. This drab-looking setup menu uses a black background and moody monochrome graphics, with clearly-structured lists. 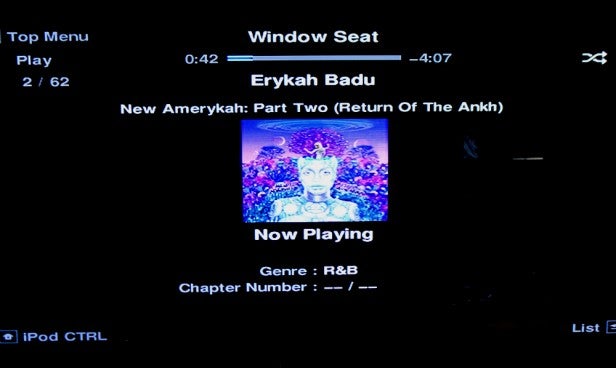 Play music from an iPod or DLNA server and the Pioneer displays cover art and white text dotted around it. It’s all a bit dull but gets the job done. Onscreen dialogue boxes let you alter audio and video settings during playback, but these are also basic and old-fashioned.

What really makes the Pioneer VSX-923 a chore to operate is the remote, which is poor for so many reasons – the ranks of tiny buttons with cryptic lettering that up the spaces in between, the dual function buttons, the ‘Receiver’ button – which you have to press in order to access the Home menu – and the awkward clicky direction pad.

Thankfully Pioneer’s iControlAV2013 app is a million times better. Available for iOS and Android, the app’s new interface allows you to control the VSX-923 with a phone or tablet, and browse music files on networked devices. It’s fun, stylish and intuitive, and covers practically every function.

Additionally Pioneer’s AVNavigator app, which can be downloaded for free from Pioneer’s website for Mac, iPad and Windows, gives you an introduction to wiring and calibrating the unit.

Playing The Hobbit on
Blu-ray, you can tell early doors that the Pioneer VSX-923 is a classy
performer, offering a smooth and intricate sound. The movie’s soundtrack
is conveyed with entrancing clarity and precision, and impressively the
Pioneer doesn’t lose focus at higher volumes.

The opening scenes
before Smaug’s assault on Erebor are beautifully presented, with lots of
crisp, twinkly detail peppering the soundstage, from the glassy chink
of chisels tapping on rock to kites rustling in the wind. It teases out
the smallest details and articulates Ian Holm’s narration with terrific
authority.

However, its sonic character is definitely more Hugh
Grant than Jason Statham, favouring a more polite, detailed approach
over the brash, brutal sound you’d get from, say, a Yamaha or Onkyo.
That’s fine most of the time, but in the heat of a raucous action scene
we found ourselves craving something a little more thunderous and
visceral.

But that’s not to say that the Pioneer doesn’t get the
adrenaline flowing. As the dragon smashes its way into the mountain, it
batters down the door with a splintery crunch, there’s a convincingly
metallic clank as armoured dwarves clatter into the walls and the
dragon’s roar is blood curdling, without the raspy edge that blights
lesser sound systems.

Mid-range and high frequencies are clean and
forceful, making the overall sound feel energetic without crossing the
line into harshness, while bass notes are taut, punchy and seamlessly
integrated.

We’re also impressed by the VSX-923’s orchestration of
the soundstage. Surround effects are cleanly isolated and accurately
placed, plus the Pioneer moves them between channels with great speed
and smoothness.

So in a nutshell, the Pioneer VSX-923 is an impressive
movie performer, delivering a refined, detail-packed performance with
good dynamics and enough muscle to keep you on your toes. It’s not the
most gut-wrenchingly powerful receiver though – those looking for more
aggression and bite should check out the similarly-priced competition
first.

When
weighing up the Pioneer VSX-923’s pros and cons, there’s certainly a lot more
to put in the ‘pros’ column. We love its wholehearted commitment
to smartphones and tablets, with support for Apple devices (USB
playback, AirPlay), Android phones (HTC Connect, MHL) and DLNA music
servers.

But
sadly that ‘cons’ column isn’t empty. Unless you’re using Pioneer’s
excellent control app, the Pioneer VSX-923 can be a pain to use due to the
confusing remote and patchy onscreen design.

It’s also a shame
Bluetooth and Wi-Fi aren’t built-in (but not a deal breaker) and
although its sound is perfectly entertaining and dynamic, some listeners
may crave a bigger, more brutal sound. But if none of those things
bothers you, then the VSX-923 has enough going for it elsewhere to make
it a worthwhile purchase.

The Pioneer
VSX-923 boasts a terrific feature list and delivers an entertaining
movie performance, but if you’re after thunderous power look elsewhere