The SC-LX87 feature list is staggering – you name it, this bad boy probably does it. We’ll start with music streaming – hooked up to a network it’ll access music from PCs, NAS drives and other devices with full DLNA compliance. It’s Windows 7 and 8 certified too.

The list of files that can be played via LAN or USB includes MP3, AAC and WMA, as well as WAV, FLAC AIFF and Apple Lossless. Fans of hi-res music will also welcome WAV, FLAC and AIFF playback up to 192kHz/24-bit.

Built-in AirPlay makes it easy to stream from iOS devices and computers running iTunes. Owners of HTC One phones can also stream music wirelessly thanks to the Pioneer’s HTC Connect support. Bluetooth isn’t built-in, but you can add it with Pioneer’s optional AS-BT200 adapter. 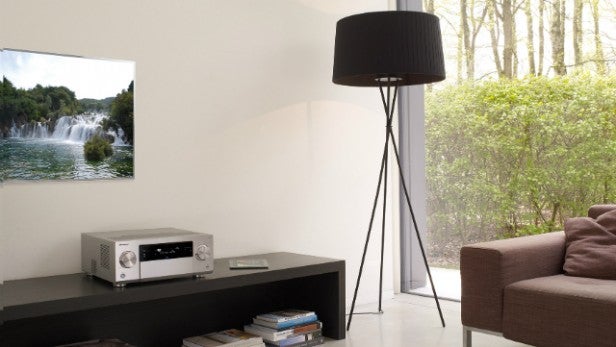 If you want to expand your musical horizons with some new tunes, there’s support for the Spotify Connect app too (which lets you play and control Spotify on mobile devices) and internet radio courtesy of vTuner.

But the real draw for hardcore home cinephiles is the SC-LX87’s stupendous spec, which includes a whopping power rating of 220W per channel and decoders for every Dolby and DTS format going, including Dolby Pro Logic IIz and DTS Neo:X. These expand the soundstage vertically with front height channels (and, in the case of DTS Neo:X, horizontally with front wide channels).

There are eleven Pioneer processing modes, including Advanced Cinema/Concert modes and Virtual Surround Back, while the Audio Scaler pimps up CD-quality two-channel digital signals to 32-bit and 192kHz in a bid to offer a ‘high-resolution experience’.

On the video side, there’s 4K upscaling and pass-through, plus Stream Smoother (which cleans up dodgy web-derived video) and Advanced Video Adjust to tweak the picture.

Some companies, like Marantz and Onkyo, have mastered the art of making a super-complex receiver easy to use. Sadly, Pioneer has not.

Using the supplied remote is a horribly complicated process – it’s covered from top-to-bottom in tiny keys and microscopic labels, many of which are cryptic abbreviations. Several of the buttons also appear to have two functions, and very often you have to hit the ‘Receiver’ key in order for certain buttons to work. Not good. But in its defence it’s backlit and sports a fetching brushed finish.

Thankfully help is at hand for owners of iOS/Android devices, as you can control the Peioneer SC-LX87 using Pioneer’s superb iControlAV2013 app. You can access all the main functions from your smartphone/tablet, and use the new Push Player setting to create playlists from the music stored on the device and push it to the LX87.

The LX87’s onscreen menus aren’t the most visually engaging, but we doubt its core audience will care too much about that. The moody black backgrounds and white text retain an element of simplicity that makes it easy to find the function you’re looking for.

The Home menu treads familiar Pioneer territory – a box on the left houses the options, illustrated by a monochrome icon on the right. It goes into an obscene amount of detail, allowing you to manually configure the speakers right down to the smallest details. If you can’t be bothered with that, then Pioneer’s MCACC configures all the key settings using the supplied microphone.

Elsewhere, media playback menus are clearly presented, and exploring music stored on networked servers or internet radio stations is straightforward enough – although if you have a big collection, scrolling through the lists can be tiresome as the cursor is a little slow on the uptake.