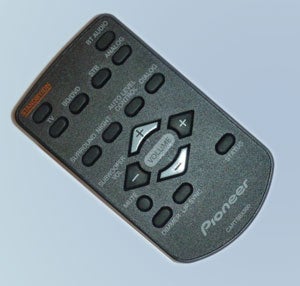 The Pioneer SBX-300’s small remote is surprisingly pleasant to use. The buttons are made from rubber, as opposed to the awful blister-style keys used by some soundbar remotes. All of the keys are clearly labelled too, and the layout isn’t confusing or cluttered.
There are buttons for each input, dedicated keys for each sound mode (including lip sync and display dimmer) and separate buttons for the main and subwoofer volumes. It covers everything. For extra convenience you can also programme the Pioneer to learn volume commands from your TV’s remote.
If you install the SBX-300 in front of your TV, there’s a pair of feet in the box that raise the soundbar by about 20mm, should you need to. If the soundbar blocks your TV’s infrared sensor, use the IR repeater function to passes on commands using the supplied IR cable, which plugs into a port on the back of the unit.
A proper LED display always makes life easy when using a soundbar, but in its absence the Pioneer makes the best of its LED indicators. They light up in different colours and positions, and when you adjust volume they form a line to indicate the level. It’s crude, but simple to understand.

The Pioneer SBX-300 is a very impressive soundbar for the money so far, but let’s get to the nitty gritty – performance. And we’re pleased to say that its sound quality is every bit as assured as the SBX-N500, offering a rich, fulsome sound with clear detail and hearty bass output. Inevitably there are a few shortcomings, but overall it’s a decent performer for the money.
The Pioneer brings presence and authority to movie soundtracks, filling our modestly-sized room with energetic effects and deep, fluid bass. Low frequencies are its forte, bringing a sense of depth to crashes and explosions that you simply don’t get from a TV. Bass is also tight and well-integrated, provided you don’t go overboard with the sub volume.
We played Snow White & The Huntsman on Blu-ray, and when the titular pair is attacked by a troll in chapter nine, the beast thumps the ground with big waves of tight bass and shreds the tree with a fierce crack. Skip to the final showdown with Queen Ravenna and the exploding roof makes a hefty boom, while clinking glass soldiers are crisply rendered. 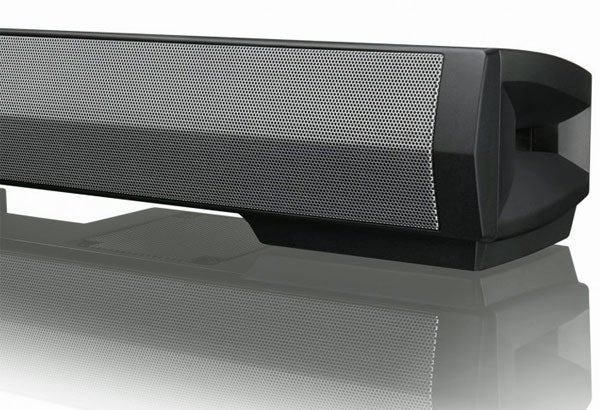 Voices could be a little more open and detailed, but that didn’t stop us hearing any of the movie’s dialogue. Ravenna’s frenzied monologues and the Mirror’s deep, authoritative tones are highlights.
You can turn the SBX-300 up to fairly high volumes without any rattle or bass boom – that sturdy, well constructed cabinet really comes into its own here. That said, we pushed it a little too far and the speakers did start to crackle when the troll roared.
There are other shortcomings – detail sounds thinner than the best soundbars, while some high-pitched sounds have a slightly shrill edge. But given the price, we can live with these drawbacks, and unless you crank up the volume to silly levels they really don’t interfere with your enjoyment.
Oddly, the Pioneer sounds even better with TV material. Its loud, dynamic sound is perfect for everyday dramas, soaps and sport, making speech sound crystal clear and injecting depth into even the most innocuous theme tunes – the musical stings between rounds on Pointless sound unusually rich and dramatic.
We also tried streaming songs from an iPod over Bluetooth and were hugely impressed by the Pioneer’s precise, well-balanced sound. We tried a bit of Japanese jazz-funk, hip-hop and rock and the Pioneer was unfazed by the noodling solos, uptempo urban rhythms and aggressive guitars.

If you only have £150 to spend on a soundbar and aren’t bothered by bells and whistles, then the Pioneer SBX-300 is a fine choice. Its build quality and styling are top-notch, Bluetooth is a welcome bonus and there are plenty of connections, despite the lack of HDMI ports.
It also performs admirably with movies, TV and music, offering deep, well-controlled bass, clear detail and an open stereo stage. Admittedly there are a few reminders of its budget price tag but its performance is better than you might expect for the money.

Pioneer’s entry-level soundbar is an affordable, uncomplicated affair, offering excellent build quality and performance for the money, with Bluetooth as an added bonus.

Next, check out our round-up of the best soundbars