Pioneer’s LX series of home cinema systems places the emphasis on style, but not at the expense of performance. Last year we were blown away by the LX01 package, which blended jaw-dropping design with some of the best sonics we’d ever heard from an all-in-one system – and it was also one of the first systems to boast Dolby TrueHD and DTS Master Audio decoding, despite not even featuring a Blu-ray player.


But since then Pioneer has launched two Blu-ray style systems – the LX01BD, a hi-def upgrade of the LX01 with a combined Blu-ray player/receiver unit and omni-directional speakers, and the LX03BD, an upgraded version of the LX03 system that comes with a separate Blu-ray player, receiver, and a set of satellite speakers. Both are expensive but we’re hoping that the performance will justify the cost.

All of the LX03BD’s components look stunning, boasting that sleek, esoteric black finish that Pioneer does so well. The BDP-LX08 Blu-ray player (which is also available separately) is the epitome of minimal, with a flap covering the entire front section, leaving a central blue light as the only sign of life. It’s much slimmer than the BDP-LX71 or BDP-51FD, but the sturdy brushed aluminium top cover gives it a similar level of sturdiness. Drop down the front flap and you’ll uncover an informative display panel that shows the elapsed time and current title/chapter, with play, stop and open/close buttons below it.

The SX-LX03 AV receiver matches the LX08 perfectly, with the same brushed black aluminium and matte combo and almost the same dimensions – when perched on top of each other, the two units ooze understated elegance. Below the front flap is a USB port that lets you connect an iPod and control it with the system’s remote, plus minijack sockets for headphones and the auto calibration microphone (more on that later). The nicest feature, however, is the row of touch-sensitive buttons along the top, which light up when the motion sensor detects a hand approaching.


It’s supplied with a set of unusual-looking 5.1 speakers, all of which are styled in a luxurious gloss-black finish. You get a pair of dinky rear speakers, a slightly taller pair of fronts, a compact passive subwoofer and two compact cube speakers that handle centre channel information – the centre channel cable splits in two and feeds both speakers. You can either place these in the traditional central position under the TV, or place the front speakers on top and join them together at the back using screws. 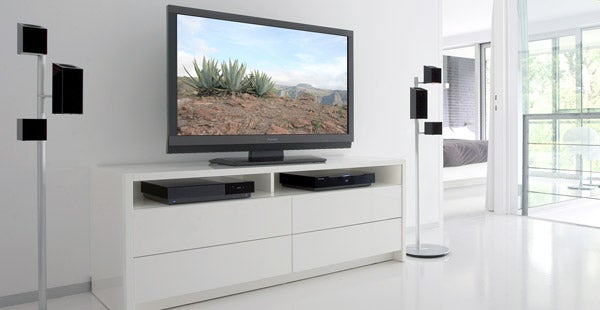 In the alternative Front Surround setup, the rear, front and centre speakers all sit in a cluster on either side of the TV. That way, you can position all of the speakers neatly at the front of the room but still enjoy a surround effect (using the built-in surround modes) which is ideal when rear speaker placement isn’t possible.

The SX-LX03’s socket selection is fine if you only have to hook up the Blu-ray deck, but connecting the rest of your home entertainment kit might be tricky. There are just two HDMI inputs, one of which is taken up by the LX08, so if you want to use it as an HDMI switchbox for an upscaling DVD deck, PS3 and Sky HD box, you’ll have to prioritise. There is, however, a decent range of audio inputs – two optical digital, one coaxial digital and one analogue stereo – which should cover the HDMI shortfall. The line up is completed by stereo audio outputs, IR in/out jacks, FM/AM antenna inputs and a bank of colour-coded speaker plugs.

As for the BDP-LX08, it’s equipped with HDMI, component, S-video and composite video outputs, 7.1-channel analogue outputs, stereo audio output and an optical digital audio output. Inside the LX08 are the same components and features as the BDP-LX71, which is great news – apart from the fact that it shares the LX71’s outdated Profile 1.1 spec, denying you the web-enabled pleasures of BD Live. This isn’t particularly clever for a system at this price.


The BDP-LX08 can decode Dolby TrueHD and DTS HD Master Audio, and pipe either as a bitstream to a compatible receiver’s HDMI input. Unfortunately the SX-LX03 doesn’t support either format – which is odd given that the DVD-equipped LX01’s receiver could decode them – but its ability to handle uncompressed PCM over HDMI from the LX08 means you can still enjoy the same hi-res sound quality. You lose the thrill of seeing Dolby TrueHD or DTS HD Master Audio pop up on the display panel but it’s a small sacrifice. 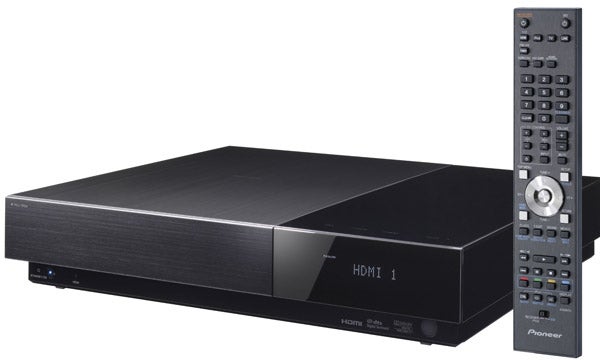 The BDP-LX08 can play DivX, MP3, WMA and JPEG, and it supports the Precision Quartz Lock System, which eliminates jitter when playing back CDs over HDMI (but you’ll need a Pioneer amp for it to work). Among the SX-LX03’s features is a range of Advanced Surround modes with names like Action, Unplugged and Sports, plus two Front Stage Surround modes (Wide 5.1 and Focus 5.1) are on hand for the Front Surround speaker configuration.


Elsewhere there are plenty of picture and sound tweaks that let you calibrate performance down to the finest detail, but less experienced users can opt for the Multichannel Acoustic Calibration (MCACC) mode, which automatically optimises the speaker settings based on test-tone measurements taken using the supplied microphone. 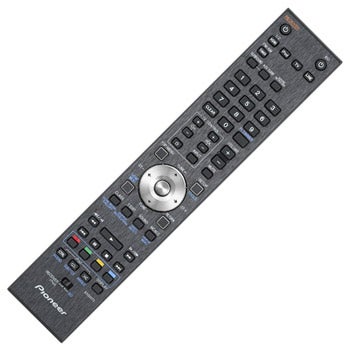 Otherwise, setting up the system is more long-winded than your average all-in-one. The springclip terminals on the back of the speakers are tiny and make it hard to slot in the speaker cables, while the process of connecting up the front and centre speakers is a bit of a pain. But once it’s installed, the player’s beautifully designed onscreen menus and the receiver’s straightforward front display panel lets you alter settings without any hassle. The receiver’s remote controls both the player and receiver (you can ditch the LX08’s zapper altogether) and the switch at the bottom lets you choose which component to control. Despite this, it’s a joy to use thanks to the thoughtfully spaced out and well labelled buttons.

Disc loading times aren’t quite as slick though, with the LX08 taking over a minute to get ”Spider-Man 3” off the ground, and ”Iron Man” taking around 45 seconds. But once it’s locked and loaded, the resulting picture quality is absolutely sublime, with the system serving up images that look every bit as vivid and pristine as the LX71.


During ”Iron Man” for instance, shots of the dusty desert look textured and life-like, while shadows inside the cave are profoundly black yet details remain clearly defined. Tony’s array of technological toys and fast cars are reproduced with needle-sharp detail and rich, dazzling colours. Dark objects meet light backgrounds without jaggies or edge noise, and motion is consistently fluid. And like the LX71 it turns in a skilful performance with the Silicon Optix HQV disc, suppressing jaggies on rotating bars, taming noise and correcting 3:2 pulldown with consummate ease.

Sound-wise the LX03BD is equally proficient, tackling ”Iron Man’s” frenetic action scenes with vitality and cohesion. Crashes and gunshots are sharp and snappy, the sub boosts explosions with deep, muscular bass and dialogue is smooth and prominent – surprisingly, those tiny speakers project speech into the soundstage superbly, even when the fronts are stacked on top. What’s more, surround effects are fired from the rears with accuracy and crispness, giving the soundstage a spacious, expansive feel.


We’re also enamoured with the system’s music handling capabilities. The sound is rich and rewarding, with a beautiful balance across the frequency range and a really impressive sense of timing. It’s a lot more refined than your average all-in-one system, and if you love to kick back with a CD then the LX03BD will seem like money well spent.


For a Blu-ray based system costing over £1,500 on some websites, the LX03BD’s feature list is nowhere near as cutting-edge as it should be. The LX08’s Profile 1.1 spec and the lack of Dolby TrueHD/DTS HD Master Audio decoding are disappointing (despite the receiver’s PCM handling capabilities) plus a couple more HDMI inputs wouldn’t have gone amiss – all of which doesn’t make the system feel like particularly good value.


But feed it a Blu-ray disc and you begin to see where your money’s going, as its picture and sound quality are out of this world. It’s also one of the best-looking Blu-ray systems you’re likely to see, with a gorgeous and distinctive design that will enhance any room it’s installed in – especially if you pair it with one of Pioneer’s Kuro plasmas.