For a couple of year’s now, Pioneer’s KURO plasma TVs have towered over the rest of the TV world like some modern day Colossus, delivering picture quality that’s simply been in a different league to anything else around.


But as we take receipt of the brand’s 60in PDP-LX6090, it’s fair to say that the pressure on Pioneer is starting to mount. In recent times, after all, we’ve seen outstanding plasmas from Panasonic as well as a striking LED LCD TV from Samsung (the LE55A956) that definitely raises at least the possibility of LED technology one day snatching away Pioneer’s crown. 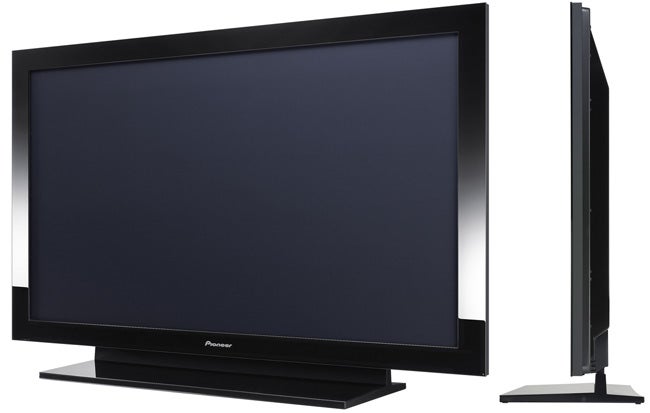 However, the LX6090 immediately sets about keeping the Pioneer end up with its build quality. There really is something special about the stunningly robust and opulent feel of the LX6090’s bezel. As, I guess, there ruddy well ought to be considering that the LX6090 will set you back the best part of £4,100.


It’s worth adding here, too, that although the Comet price we’re quoting includes a desktop stand, you’ll usually have to cough up a fair bit extra if you want to secure the detachable speakers Pioneer makes for the LX6090.


The LX6090’s connectivity is arguably a touch disappointing for such a premium-priced set, in that it ‘only’ includes three v1.3 HDMIs when a few sets from the likes of LG, Samsung and Philips are starting to carry four. 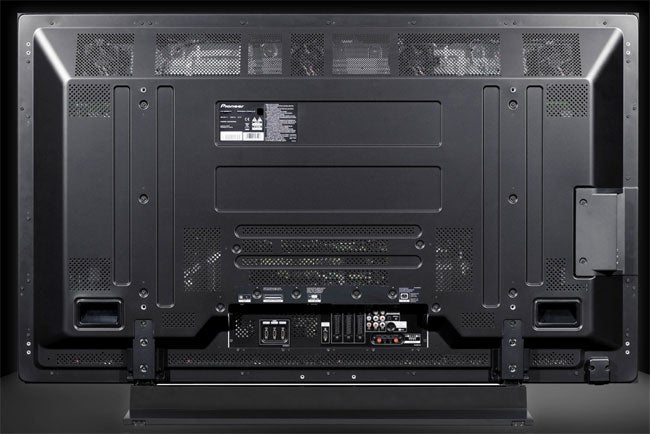 But there’s some good connection news too, in the presence of a subwoofer line-out, a digital audio output, and a USB port for digital photo viewing. This USB input is made particularly useful by the fact that it’s driven by Pioneer’s truly excellent Home Gallery software, which represents easily the most serious attempt yet at providing a genuinely useful and high quality interface for viewing photos on a TV.


In looking at other features of the LX6090, we have no choice but to concentrate first on the technological advances Pioneer has made during the time that’s elapsed between last year’s 8th plasma generation and the latest models. For it’s only in doing that that we can really convey a sense of the sort of technological stuff that goes into making Pioneer KURO TVs so different. 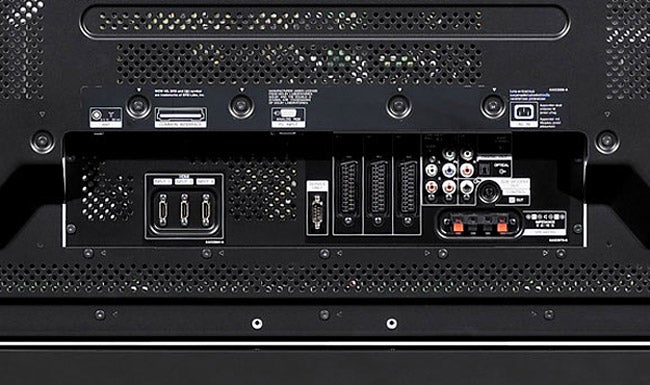 Particularly notable is the development for the 9th-gen screens of a new, improved Direct Colour Filter, Pioneer’s proprietary – and jealously guarded – technology for slashing the amount of accidental light bleed within each plasma cell. As you would expect, this enhanced colour filter has a massive impact on how black dark scenes can get.


Pioneer has also stepped up the quality of its image processing for its generation nine screens, taking control of colour toning, brightness and black levels right down to the individual pixel level. Plus it’s thrown 100Hz on there to enhance image stability.

The new developments join, of course, all the usual KURO technical stalwarts, such as the unique and crucial Crystal Emissive Layer that enhances the luminance efficiency and stability of the plasma discharge cycle, and the Deep Waffle Rib structure around the plasma cells that slashes interpixel light and colour bleed.


Other examples of the profound seriousness with which the LX6090 approaches its picture duties are a dedicated 72Hz mode for superior handling of 24p sources; outstandingly extensive noise reduction options; and terrific colour manipulation flexibility that make it no surprise whatsoever that the LX6090 can be professionally calibrated by an Imaging Science Foundation engineer. 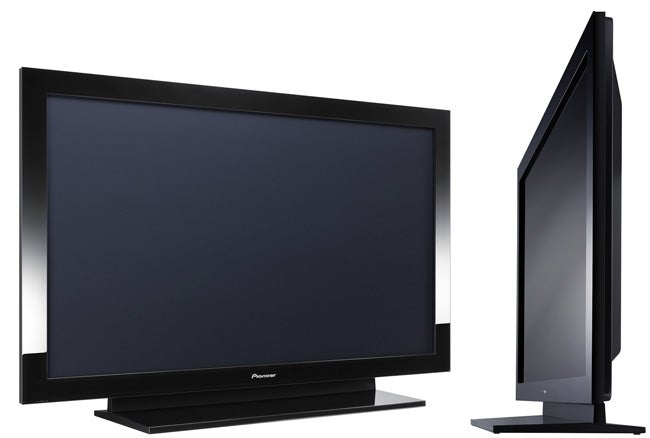 Actually, the LX6090 seems so focussed on its picture quality that it’s arguably taken its eye off the ball a little when it comes to usability. For although the onscreen menus are attractive enough, some features are a little tough to track down in a hurry, and some aspects of initial set up – especially the need to manually activate the HDMI sockets – are far from helpful.


Irritations with the LX6090’s handling are soon forgotten, though, as soon as you clap your eyes on the TV’s truly stunning pictures. Not only are they a chip off the old KURO block, but the 60in screen size actually makes them appear even better than those of the 50in model.


Certainly at 60in you become more aware of just how sharp and detailed the latest KUROs can go with HD sources. The screen’s Full HD resolution and Pioneer’s terrifically clean image processing combine to stunning effect with favourite Blu-ray sequences such as Bond’s pursuit of Vesper down the streets of Venice during ”Casino Royale”. 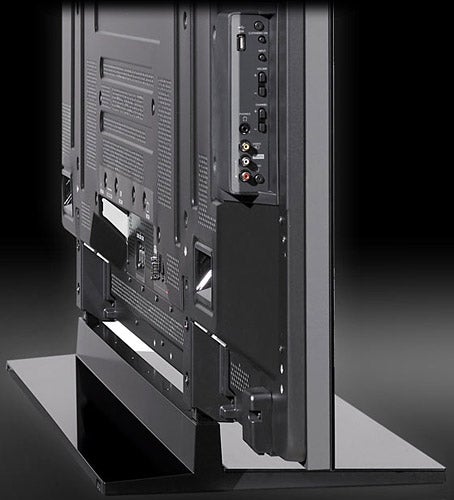 Also key to the clarity of the LX6090’s HD pictures is their freedom from the sort of motion blur that troubles most LCD screens. Not to mention the way its specialist 24p processing delivers Blu-ray’s with mesmerising fluidity.


The next thing to catch my eye is how bright and colour-rich the LX6090’s pictures are. It’s customary for big plasma screens to lack luminance versus the best LCD or smaller plasma models. But while, admittedly, Samsung’s LED-based LE55A956 (tested earlier this week) looks markedly brighter, the LX6090 actually looks really vivid for such a large plasma screen.


Colours look superbly expressive too. By which I mean they enjoy a truly expansive tonal range, and benefit again from Pioneer’s image processing in the way that subtle colour blends and shifts are portrayed with terrific accuracy. Skin tones in particular benefit from all the subtlety on offer, looking free of the striping or plastickiness still common on flat TVs.

All this and we still haven’t mentioned the LX6090’s defining feature: its black level response. As we noted in the LX5090 review, Pioneer has almost embarrassed us with its 9th-generation screens by proving that the black levels we thought so amazing on the brand’s 8th generation screens actually had plenty of scope for improvement.


And so the LX6090’s stunningly black rendition of the almost complete darkness of the opening in-oil-mine shots of ”There Will Be Blood” actually leaves the 8th-gen screens looking rather grey by comparison. From which it follows that the LX6090 leaves most LCD rivals looking practically white by comparison!


It’s important to stress, too, that the LX6090’s inky blackness is very naturally portrayed, with no blue or green undertones, and plenty of subtle greyscale/shadow detail information to keep dark scenes looking layered and three dimensional. 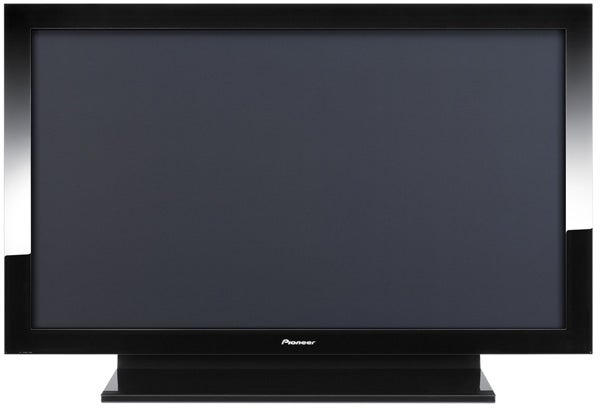 Trying to find something negative to say about the LX6090, I guess it might scare the Pioneer people if I say that the aforementioned Samsung LED TV does seem to deliver black levels of roughly the same order as the LX6090, together with greater brightness. But before Pioneer gets too scared, the LX6090’s black levels retain their integrity better, since they’re not affected by the slight blooming effect witnessed around really bright picture elements on the Samsung LED set – especially when watched from any sort of angle.


If you sit too close to the PDP-LX6090, I guess it’s also possible to make out some very fine dot crawl noise. But oddly – and thankfully – this disappears pretty much completely if you give yourself a sensible gap between yourself and the screen.


Yes, the appearance of the first of the new LED TV generation means that the LX6090’s black levels are no longer as far ahead of the chasing pack as they used to be. And yes, there’s no doubt that the £4k-plus price tag looks mighty high in these hard financial times.


But tellingly the LX6090’s pictures still hold their own, leaving it as the premier big-screen TV money can currently buy. So if you’re somehow feeling flush and just have to have the best no matter what it costs, go get yourself an LX6090 pronto. Just be prepared for when all your hard-up friends suddenly start hating you…