It might only be December 15th as we’re writing this review, but for us, Christmas has come early. For sat imperiously on our test benches is something we’ve been frankly desperate to get our hands on for months: the first of Pioneer’s KURO plasma TVs with a full HD resolution.


And now that the LX608D is finally here, first impressions suggest that it isn’t going to disappoint. For starters, there’s the sheer size of the thing; with its 60in screen it’s an attention-seeking behemoth reminiscent of that black monolith at the start of 2001: A Space Odyssey. Sadly we can’t say for sure if its presence in our test rooms is having any beneficial effect on our brains in the same way the monolith boosts the mental abilities of 2001’s apemen. But you never know. Maybe you’ll find this review even more intellectually rigorous than usual.


Anyway, getting back to the job at hand, it’s pleasing to find that a 60in TV does not have to look ugly. In fact, with its ultra minimalist, high-gloss black bezel the LX608D is something of a style icon – albeit a very masculine style icon. It also feels imperiously well built, bolstering our already high hopes that the set’s innards are going to be of the very highest quality. 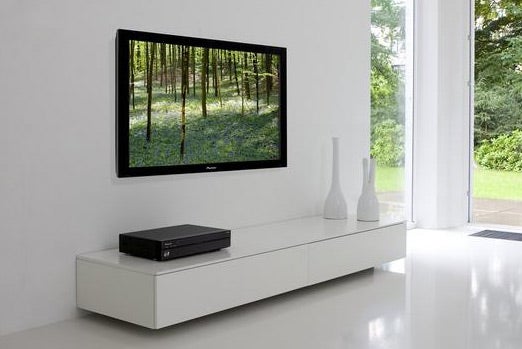 And let’s face it: they kind of need to be. For at the best part of five grand – and that’s the cheapest price we could find – the LX608D isn’t a cheap telly by any stretch of the imagination. Don’t forget, after all, that we recently tested a thoroughly decent 63in full HD plasma TV from Samsung that cost under £3,500. Can the LX608D really justify costing £1500 or so more than that also very impressive king-sized TV?


Well, it’s got enough connections, at least, to bolster its ‘premium TV’ ambitions. These include three HDMIs all compliant with the new v1.3 standard, making them compatible with v1.3 features such as automatic lip-synch correction and Deep Colour.


Deep Colour, lest you haven’t heard of it before, is reckoned to deliver a much richer colour palette than standard video – though it’s dependent on the format being encoded onto a disc, and sadly no such discs have yet appeared on a commercial basis! Still, it’s nice to know the TV’s ready for it should it ever appear.


When it comes to features, the LX608D’s premium status merely grows. For instance, as you’d hope of a set with a full HD resolution, it backs up its HD love-in with a 1:1 mode for showing 1080-line sources with no overscanning. Plus it’s unusually handy at showing the key 1080p/24fps format now being output from many of the latest HD DVD and Blu-ray players. Why ‘unusually handy’? Because it’s got a 72Hz playback mode allowing for a simple 3:3 pull-down system that should result in a much cleaner, smoother finish than you get with TVs that just try and convert 24fps into 50 or 60Hz.

We really must remind you, too, of the LX608D’s ‘KURO’ talents, whereby it employs a plethora of new technologies to produce a black level response hitherto unrivalled in the flat TV world.


Since this isn’t the first KURO set we’ve covered, we won’t go into great detail on how KURO’s black level majesty is achieved. But briefly, it consists of five key elements. 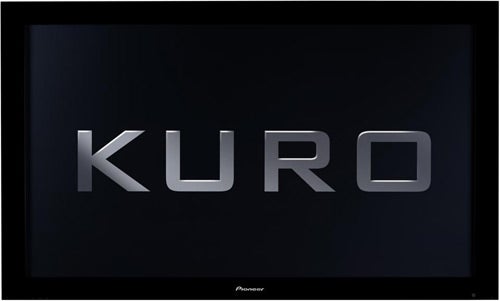 Catching our eye in the neatly presented onscreen menus, meanwhile, are a selection of four different types of noise reduction system, picture in picture options, and an ambient light sensor that can automatically optimise picture settings according to the amount of light in your room.


Given the world-beating performance witnessed with Pioneer’s HD Ready KURO screens, two questions need to be asked of this first full HD model: has the introduction of extra pixels forced any compromises to the KURO system; and can it really produce a performance level even higher than that of its lower-resolution siblings?


Happily, the simple answers to these two basic questions are: no, and yes. But we guess you’ll probably be wanting a bit more in-depth explanation than that, right? Honestly, you people are so hard to please, sometimes.


Given that it’s what sets the LX608D apart from other KURO models we’ve already seen, let’s start with an assessment of what the full HD resolution brings to the party.

Fed a particularly highly detailed 1080p source like the only good Pirates of the Caribbean film (that’ll be the first one, in case you somehow weren’t sure), the LX608D serves up a positive feast of fine detail and total HD precision merely amplified a) by the fact that there’s remarkably little video noise if you use the provided ‘pixel by pixel’ aspect ratio setting, and b) by the screen’s sheer size.


Seriously, if you haven’t seen 1080-line HD running on a high-quality, full-HD 60in (or more!) screen, you arguably haven’t really seen it at all. Jawdropping.


There’s another obvious benefit of the full HD pixel count too: smoother, more believable colour blends. This is particularly obvious in skin tones, as the increased density of the pixels in the full HD screen means you get none of the faint colour banding problems often seen with large HD Ready screens. A knock on effect of this improved colour blending is that pictures tend to look more three-dimensional and solid

To be fair to Pioneer’s HD Ready KUROs, the LX608D’s full HD benefits of less noise, greater detailing and smoother colour transitions are all pretty subtle improvements exaggerated by the screen’s enormity. But subtle or not, they’re certainly there. And we’re pretty sure that the sort of person with £5k to burn on a TV will want only the absolute best, no matter what the cost.


And believe us: the LX608D really is the very best. For the terrific qualities described so far courtesy of its full HD resolution are actually just part of what makes the LX608D so special. For thankfully it transpires that the shift up the resolution gears has not compromised the KURO black level response seemingly at all.


This is to say that dark Pirates scenes, like the Black Pearl’s night-time assault on the fort, enjoy black levels which are quite simply the finest we’ve yet seen on a flat TV. They seemingly effortlessly avoid all traces of the customary flat TV greyness while also retaining phenomenal amounts of shadow detail and portraying even the most delicate of dark colour tone shifts. Or, to put it in layman’s terms, watching the LX608D delivers the closest experience to going to the cinema that any TV has managed to date. 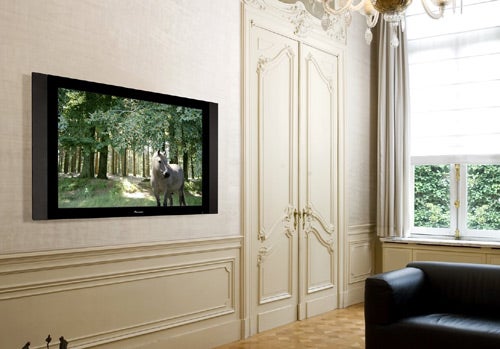 Good black levels usually go hand in hand with impressive colours. So it follows that the best black level around should go with some of the best colours around. And indeed, the dynamism, range, and naturalism of the colours portrayed by the LX608D really do beggar belief at times.


The single best example of what we’re getting at here can be seen in the reds of the soldier’s coats in our Pirates test disc. On most plasma TVs they tend to look slightly orange. But on the LX608D they look totally, emphatically, eye-seducingly red from start to finish.


Yet more good news concerns the LX608D’s motion handling, especially if you give it a 1080p/24fps feed and make sure it’s running in its 72Hz mode. With this configuration motion is really quite sensationally fluid, clean and crisp. But even using a lower-quality source objects pass across the screen without any of the judder or resolution loss that afflicts so many flat rivals.


With the sound quality from the LX608D’s optional speakers proving pretty much as stunning as its pictures, you might be thinking that we’re looking at the ‘Perfect TV’ in the LX608D. And you know, it very nearly is. But not quite.


For it seemed to our eyes that the LX608D’s pictures aren’t quite as bright and vivacious as those of the smaller, HD Ready KUROs, meaning you need to at least slightly darken your room if possible to fully appreciate the quality on offer.

Also, standard definition pictures don’t look quite as enjoyable as they do on other KURO models. But then arguably this is inevitable on a screen as unforgivingly massive as 60in.


For pity’s sake, though let’s not end on a negative vibe. For that would be to do both the LX608D and you, the buying public, a grave disservice. After all, while it may not quite achieve perfection, for our money the LX608D gets closer to it than any TV we’ve seen before.