Sometimes the smallest of differences in a TV model name can hide a whole world of difference in specification. So it is with Pioneer’s PDP-LX508D. For although this 50in plasma TV shares almost the same moniker as the Pioneer PDP-508XD we’ve reviewed previously, it actually boasts one very important difference: a full HD pixel count where the previous model was only HD Ready.


As well as potentially making the LX508D an even greater friend to HD material than the already superb 508XD, it’s worth reflecting too on how tricky it is for plasma technology to fit full HD’s 1,920 x 1,080 pixel requirement into any sensibly sized screen. In other words, the LX508D really is in a whole other world technologically to its cheaper, HD Ready sibling. This goes at least some way towards explaining the LX508D’s rather hefty price hike, which finds it costing in the region of £1300 more than the 508XD. 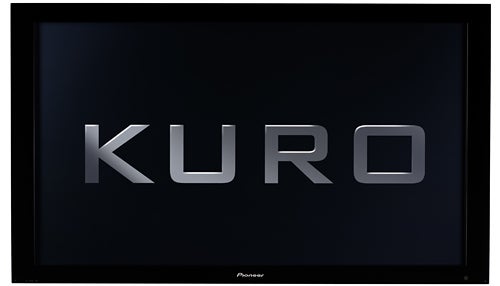 There’s nothing new about the LX508D’s looks, though. It sports exactly the same extremely minimalistic, angular, glassy black bezel found across Pioneer’s range. But given how supremely elegant, opulent, yet understated this design is, we’re not complaining.


Connectivity on the LX508D is prodigious. As you’d hope of what’s built and priced to be very much a premium TV, we kick off with a trio of HDMIs that can all receive 1080p/24 from Blu-ray players, and are built to the V1.3a specification, making them compatible with Deep Colour sources like JVC and Panasonic’s latest HD camcorders.


Plus you get the inevitable component video input to meet the industry’s ‘HD Ready’ requirements, a trio of SCARTs, a D-Sub PC port, a USB host, an optical audio output and a subwoofer line-out.


It’s worth adding, too, that you also get spring-clip connectors for left and right speakers – a rather important option given that the LX508D doesn’t have any speakers built in! Pioneer does make its own speakers for the screen, but you’ll have to cough up extra for them. Similarly the TV’s pedestal stand isn’t included as standard. That said, though, some retailers appear inclined to throw either the speakers or the pedestal stand (though seldom both) in for free.

The LX508D is, of course, part of Pioneer’s KURO range, which regular readers will realise means that it’s able to boast industry-leading black levels. Pioneer quotes a contrast ratio figure for the screen of 20,000:1, though our experience suggests that this figure will probably prove to be pessimistic – or perhaps ‘honest’ would be a better word… – versus the sort of crazily high figures bandied around by some rival brands. 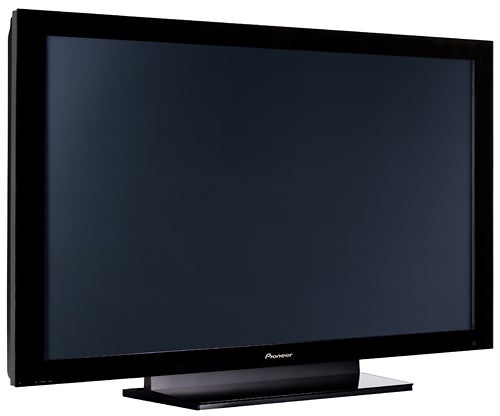 It’s worth quickly recapping what makes the ‘KURO’ black level effect possible, given how much technological wizardry is involved. First, there’s a new pixel structure that reduces colour and light bleed. Second, there’s a new Crystal Emissive Layer that enhances the screen’s brightness, contrast and response times. Third, a proprietary colour filter soaks up ambient reflections. Fourth, image processing is employed that works completely differently for dark footage than for bright. And finally plasma cells are built using a so-called ‘Deep Waffle Rib’ structure, with unusually high dividing walls, so that light and colour can’t seep between them.


As if all this plasma innovation wasn’t enough, the LX508D has plenty of other canny tricks up its sleeve. For starters it can make the best use of its full HD pixel count via a ‘dot for dot’ aspect ratio that removes all overscan processing from the picture. 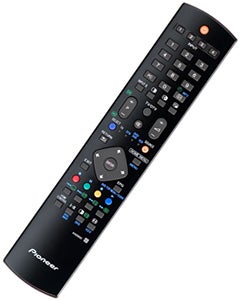 It also sports a special 72Hz playback mode designed to deliver enhanced quality with the 24fps outputs now possible from many Blu-ray players. The idea is that the simple 3:3 pulldown processing required to convert 24Hz to 72Hz should generate far less artefacting and noise than trying to turn 24Hz into the less mathematically compatible 50Hz or 100Hz systems.


On top of all this the set carries no less than four noise reduction circuits, all aimed at different types of video noise; various picture-in-picture options; the facility to have your TV fine-tuned to your specific viewing environment by an Imaging Science Foundation (ISF) expert; an ambient light sensor that can adjust the image automatically in response to your living room’s brightness; and all manner of colour flexibility.

The only slightly bum-note to report about the LX508D so far is that some elements of its operating system aren’t the easiest to use. Especially unhelpful is the ridiculously complex system whereby you have to manually ‘enable’ the HDMI sockets via an option tucked away within an obscurely named ‘Option’ menu selection. Quite why a TV as sophisticated as this can’t tell by itself when something’s connected to its HDMIs is beyond me.


Still, once you’re aware of the ‘problem’ and have got all your HDMIs up and running, you shouldn’t have to worry about this again. Which leaves you free to be completely mesmerised by how majestic the LX508D’s picture quality is.


Rather self-defeatingly, when it first launched its KURO screens in Rome, Pioneer ran a detailed demo explaining how it didn’t really feel that having a full HD resolution really made that much of an impact on HD picture quality. But while we understand their point, especially considering how good Pioneer’s scaling processing is, for me there’s just no doubt that on a screen as large as 50in there is a genuine, visible advantage to watching 1080-line HD footage on a full HD screen. Especially when that screen is as supremely talented as the LX508D. 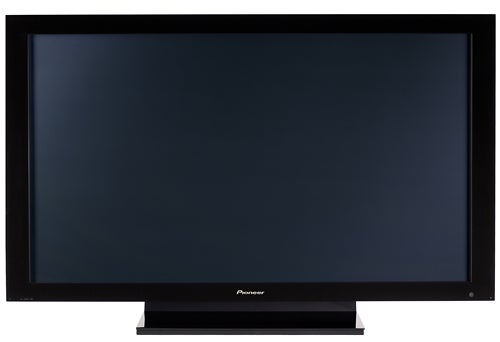 The full HD benefit can be seen in two, maybe three main areas: sharpness, noiselessness, and colour subtlety. A particularly detailed scene on the impeccable Blu-ray transfer of ”Mission: Impossible III”, for instance, such as the one in the Vatican City bathroom, looks blisteringly textured and crisp, without a trace of the dot crawl, shimmering noise or overstressed edges that can plague rescaled images as shown on a 1,366 x 768-resolution screen.


And the extra pixel density afforded by the full HD resolution likely plays a part in the way the blends of the film’s skin tones, or the shifts in blue of the skies above the famed bridge attack sequence, all look impeccably smooth and free of tell-tale ‘striping’.


It’s a testament to how crisp and clean HD images look on the LX508D’s full HD screen that we didn’t start our assessment of its performance by talking about its black level response. For that black level response truly is sensational, reminding us of just how near-revolutionary the KURO system really is. The night-time sequences in Shanghai on our M:I3 Blu-ray, for instance, take place against an inky black backdrop that makes the black level efforts of practically all rival flat TVs – especially 99.9 per cent of LCD ones – look feeble by comparison. Even Pioneer’s closest black level rivals right now, Panasonic’s Viera plasmas, can’t compete with the mighty KURO black level impact. And with extreme contrast ranges being arguably the thing that most separates film from TV footage, the LX508D can almost by default claim to be the most cinematic TV money can buy.

Another key strength of the picture is a far more expansive colour palette than we’re used to seeing with plasma technology. The impact of this can be seen in the generally natural skin tones on show, and in the way that rich reds, such as those employed in the Sky News logo, actually look red rather than orange as happens on most plasma rivals.


The coup de grâce, though, comes from the LX508D’s motion handling. There’s nary a trace of the dotting noise that still troubles many plasma TVs. But even more tellingly there’s no sign whatsoever of that damn motion blur problem found on practically all LCD TVs. Which makes it the connoisseur’s choice for sport and action movies alike. 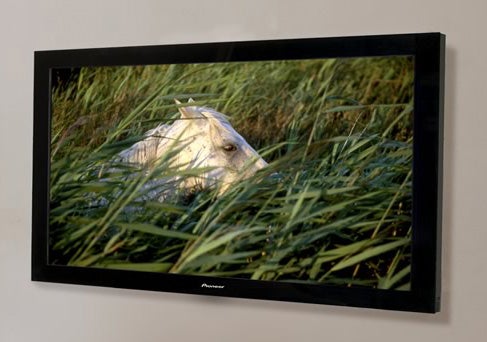 With Pioneer’s outstanding and remarkably consistent image processing even ensuring that standard definition broadcasts received via the TV’s digital tuner survive the journey to 50in of full HD resolution, I really am struggling to find anything bad to say about the LX508D’s performance at all.


Just occasionally there’s a tiny bit of noise in really dark areas, I guess, and even more rarely the processing seems to cause a fraction of a second of twitching around moving objects.


But these ‘troubles’ really are hardly worth mentioning in the context of the genuine picture greatness on show elsewhere.


At this point we’d normally get into how the TV’s audio shaped up, but as we weren’t supplied with any of Pioneer’s optional speakers for the TV, we’ll head straight to the Verdict. Though based on experience of past Pioneer speakers, if you did indulge in the ones made for this screen, you’re unlikely to be disappointed by how well they perform…


There’s no getting round the fact that the PDP-LX508D is seriously expensive by today’s 50in TV standards. The single biggest issue I have with the screen is the fact that, awesome though it is, I’m not sure many people will easily be able to justify spending almost twice as much money on the full HD LX508D as they would on Pioneer’s HD Ready 508XD for what is essentially an incremental rather than radical improvement in picture quality. Still, if your ship’s recently come in and you simply have to have the very best 50in TV in town right now no matter what the cost, the LX508D is most definitely it.