Everyone already knows that Pioneer makes the finest plasma TVs known to man, but with the KRP-600A they’ve stepped their game up even further. The KRP stands for Kuro Reference Plasma, which gives you a pretty good idea of what this gargantuan 60-incher is all about, namely delivering the sort of picture quality by which all other plasmas are judged – and with a price tag pushing £5k we’d hope for nothing less.

What that price tag does ensure is faultless build quality and stunning looks. The screen sports Pioneer’s familiar sleek gloss black bezel, which makes it look superficially similar to the PDP-LX6090, and at 64mm deep the panel is remarkably slim for a 60in set. It’s also worth mentioning that the KRP-TS01 table-top stand and KRP-S01 side speakers designed for the 600A are optional, so you’ll need to factor the cost of those into your budget if you want them. 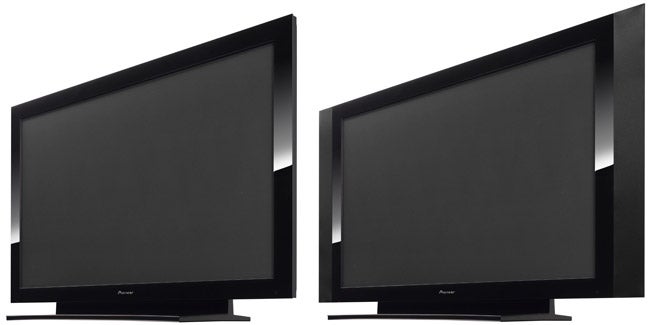 The KRP-600A also marks a return to the days of the separate media receiver, which Pioneer favoured before bringing in its ‘One Body’ concept a few years back. That means there’s a single DisplayPort cable connecting the screen and receiver, making it a neat and tidy job if you’re mounting it on the wall.


The media receiver is a stunning piece of kit, measuring 80mm high and equipped with a gloss-black front panel that not only gives it a minimal look but also hides a multitude of sockets and buttons. These include volume and programme change keys, AV, RGB PC and USB inputs and one of the four HDMI inputs it’s equipped with. Incredibly, the receiver also boasts analogue, terrestrial digital and DVB-S/DVB-S2 HD satellite tuners, which explains the presence of satellite and terrestrial common interface slots on the front.

Around the back is a plethora of other connections, including the other three HDMI inputs (all v1.3 and Kuro Link enabled), three SCART inputs, component video input and analogue stereo input, plus subwoofer, analogue stereo and optical digital outputs. But the icing on the connection cake is the Ethernet LAN port, which lets you hook up this fully DLNA compliant unit to your home network and stream music, video and photos from remote PCs.

One of the 600A’s other major features is an Enhanced Optimum mode, which uses the supplied colour sensor (which clips onto the set’s underside) and a built-in light sensor to analyse the room conditions and automatically adjust the picture parameters. You can check the performance of this mode using a special onscreen menu that tells you exactly what it’s doing to the picture through the use of a histogram and various level meters, which look really impressive to the casual user but will be of no interest to hardcore home cinephiles who avoid automatic modes like the plague.

Of much greater interest to those users is the addition of a Pure mode, which turns off all the non-essential processing and drops the sharpness down to -15 in order to deliver the most accurate pictures possible from your chosen source. But if you don’t trust these ‘out the box’ settings and want to customise the picture yourself, then there’s an unbelievable amount of tweaks at your disposal. On a basic level you get the usual colour, contrast, brightness, tint and sharpness settings, but more advanced users can use the Image Science Foundation C3 calibration tools to fine tune the image down to the smallest detail (or get a professional ISF engineer to do it). 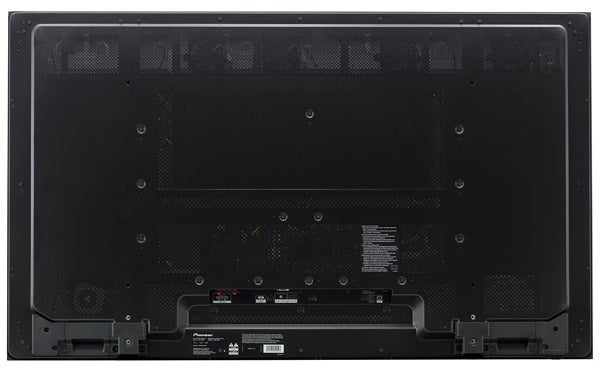 The KRP-600A features Pioneer’s ninth generation 1080p panel, which has many improvements over the G8 panels, outlined in John’s review of the PDP-LX6090. But the most significant improvement is the new Direct Colour Filter which cuts out the reflection from ambient light that can seriously reduce black level. The result is deeper, darker blacks – the thing Pioneer strives for above anything else – but the improvements on this third incarnation mean it carries out this task more effectively than ever before.


The range of other features is typically vast, but the most eye-catching is undoubtedly that satellite tuner. It’s not Freesat compliant, so you won’t get any of the red-button functions or the Freesat EPG, but you can pick up all the free-to-air channels and it can also handle hi-def MPEG-4 broadcasts – we found BBC HD among the hundreds of available channels and it looks great. All of the channels are listed in an EPG that’s cleverly designed but is painfully slow to scroll through the channels. 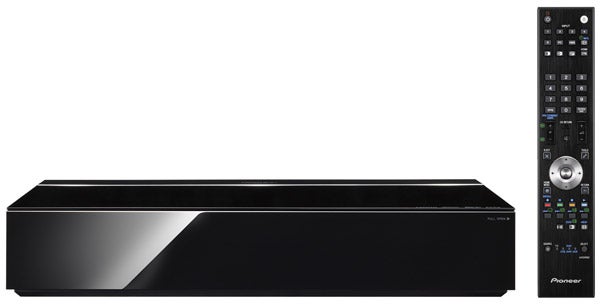 Elsewhere there are 100Hz and 72Hz modes, the latter allowing 24p Blu-ray content to be displayed without judder. There are also Intelligent Brightness and PureCinema modes, a range of other picture presets (Standard, Dynamic, Movie, and Game) and a range of SRS sound modes.


Pioneer has introduced a new user interface on the KRP-600A and it’s a joy to use. Hit the Home Menu button and the current picture is reduced to a small box on a black background with the options listed on the left. There’s a real showy, elegant feel to the graphics and text that makes navigating it feel like a privilege rather than a chore – plus it helps that it’s really smooth and responsive. Some things are a tad annoying, such as the need to activate the HDMI inputs and its insistence on automatically jumping to the SCART input, but overall this is one of the most assured TV operating systems we’ve encountered.


The remote is also superb. Its robust build should help it withstand a few falls onto hard flooring, while the intelligent button arrangement makes it a breeze to use from the moment you first pick it up. There’s also a backlight activated by a button at the top, which prevents any awkward fumbling when the lights are down low.

Plentiful features and slick operation are all well and good, but picture quality is what Pioneer plasmas are all about, and in that respect the KRP-600A is simply out of this world. Starting with high-definition content, we paired it with Pioneer’s awesome BDP-LX71 Blu-ray deck running ”Transformers” at 1080/24p, and the levels of sharpness, depth and colour it achieves are truly awe-inspiring.


Naturally the driving force behind this incredible picture performance is the set’s extraordinarily blacks, which makes the on-screen action seem supremely solid and three-dimensional. Viewing something as simple as the black background on Transformers’ closing credits gives you a good idea of how deep and pure they are, but during scenes like Blackout’s attack on the Army base or the Autobots trying to hide in Sam’s garden, they lend the image a rock-solid punchiness that serious home cinema fans will go absolutely nuts over. But the best part is that it delivers these deep blacks without losing any fine shadow detail whatsoever. 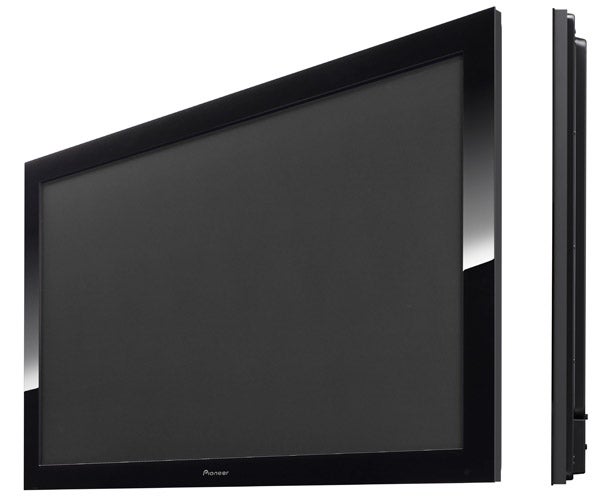 Colour reproduction is also phenomenal. It conveys the bright, dazzling stuff with staggering vibrancy but also handles tricky skin tones and other delicate hues with pleasing accuracy, while tonal transitions are reproduced with no banding.


But the thing that’ll really put your jaw on the floor is how sharp the image looks on this 1080p panel. The screen resolves every last drop of detail during Transformers’ climactic battle scenes, and even picks out the most miniscule background patterns on the surrounding buildings. Edges look pristine and close-ups of the robots simply beggar belief, while the set’s terrific processing means that everything is displayed without a hint of noise. 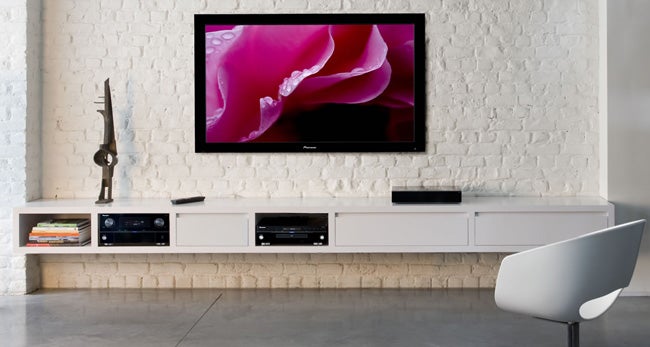 Finally we’re also impressed by how the set handles fast-moving action, particularly with the player set to 24fps – those robots rarely leap between buildings with such crispness and fluidity, freed from the motion blur that blights LCD screens.


Although the KRP-600A does the best it can with Freeview material from its built-in tuner, it can’t make a silk purse from a sow’s ear. The 60in screen draws horrible attention to the softness and block noise of most digital terrestrial and satellite broadcasts, but pictures from a decent DVD player fare much better.


Yes it’s mega expensive, but if you have money to burn and want the very best picture quality available, then the KRP-600A is without doubt the TV to go for. Its images are truly sensational, particularly with hi-def material, but there’s so much more to recommend it, such as its unparalleled range of image calibration tools, a slick operating system and a long list of killer features like network media streaming. In short, it’s simply sublime.