Despite an overall slump in loudspeaker sales in 2009, the soundbar market is absolutely booming and looks set to explode in 2010. It seems that people have really taken to the idea of boosting their TV sound quality without committing to a full home cinema system – sure, soundbars don’t provide the same immersive experience, but the clutter-free, decor-friendly benefits are often worth the sacrifice.

Pioneer HTP-SB300 soundbar not for you? Check out our round up of the best soundbars to buy


It’s no surprise then to find Pioneer helping itself to a slice of the soundbar action with the HTP-SB300. Unlike the Samsung HT-BD8200 and LG HLB54S, this one comes without a built-in Blu-ray player but still caters for owners of separate Blu-ray decks with HDMI inputs and Dolby TrueHD decoding.

In the box you get two components – the soundbar, which is designed to partner TVs between 32 and 37in, and possibly the smallest home cinema subwoofer we’ve ever encountered. The front and centre speakers inside the soundbar make this a 3.1 system, plus Pioneer’s Front Stage Surround Advance technology is on hand to make the soundstage more enveloping. Overall output power is quoted as 250W (50W to the fronts and centre, 100W to the sub), which is a respectable amount of muscle for such compact components.


As you’d expect, the soundbar can be mounted on the wall using the brackets in the box, but it can also be placed on an AV rack – there are rubber pads on the bottom to stop it slipping. The subwoofer can be placed horizontally or vertically, and because it’s wireless you don’t have to worry about where you install it in relation to the soundbar. 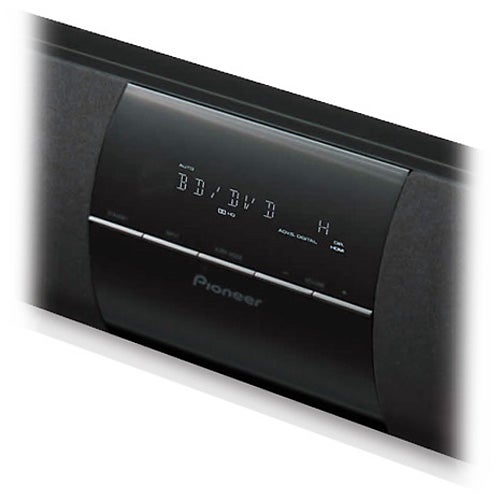 Looks-wise the main unit is very fetching, with an elegantly curved profile and some classy mirrored panels at either end. In the middle is a display panel that shows the currently selected input or the volume when adjusted, all in clear illuminated letters. There’s also a row of buttons for controlling volume, input and sound modes, but the supplied remote covers the rest.


On the back, Pioneer goes for quality over quantity, offering a choice of optical and coaxial digital audio inputs, plus two HDMI inputs and one output. Inside is an HDMI repeater, which means you can plug in other sources and pass signals through this unit (including 1080/24p), which is handy if you only have one input on your TV. Not a bad selection, but it’s surprising not to find any analogue stereo inputs or a USB port – there was a time when Pioneer would put one of those on anything.

You could be forgiven for thinking the subwoofer is a big centre speaker when you first get it out of the box. Its dinky measurements (411 x 181 x 215mm) make it a dream to hide away if you like your speakers to be heard and not seen. But with its matching black finish and mirrored side panels, it’s certainly attractive enough to have out on show, and the lack of confusing dials and switches on the back is refreshing – everything is controlled from the main unit.


Onto features, and we’ve mentioned the HTP-SB300’s ability to decode Dolby TrueHD bitstreams, but sadly it’s not backed up by DTS HD Master Audio support. It can, however, decode DTS, Dolby Digital and Dolby Digital Plus, and supports multichannel PCM from Blu-ray decks over HDMI.

There’s also a range of nine Advanced Surround modes that suit different material with names like Action, Drama and Sports. You also get some other useful modes, such as Auto Level Control – which keeps the volume constant when noisy double glazing adverts kick in mid-way through ”Midsomer Murders” – and Advanced Sound Retriever, which enhances playback of compressed audio formats like MP3, WMA and AAC. You can bypass these modes by selecting Direct or Pure Direct on the remote.


The wireless sub makes installation easy and pairs with the soundbar automatically. But when wall mounting the soundbar you’ll need to be clever with the HDMI cables coming in and out, bearing in mind your Blu-ray deck might not be anywhere near the unit. Running cables in the wall can be tricky and time consuming, and if that’s a problem perhaps a soundbar with an integrated player might be a better bet.

Once in place, setup is fairly easy, although it would have been greatly improved by an onscreen menu. As it stands, the options on the front display have to be abbreviated and don’t make a great deal of sense unless you consult the manual. The menu enables you to tweak things like audio delay, LFE attenuation and some of the sound modes.


The remote makes it easy to carry out basic tasks like adjusting the volume or selecting a different input, but otherwise this isn’t a great example of simple, streamlined zapper design. It’s far too cluttered for its own good, many of the buttons are too small and the presence of keys for controlling other devices complicates matters further. The use of the dreaded shift key for some functions is also irksome – back to the drawing board you go.

Thankfully the soundbar’s performance is far more pleasing, but by no means the best we’ve heard. With ”300’s” Dolby TrueHD Blu-ray soundtrack, the HTP-SB300 produces a powerful, detailed sound that will have most flatpanel TVs – and indeed some home cinema systems – hanging their heads in shame.


Inevitably skipping to the movie’s testosterone-fuelled battle scenes, we revelled in the wide spread of effects across the front soundstage and the crisp, forceful way it conveys the sound of metal on metal without sounding bright.


Also impressive is the amount of body and depth behind bass effects like the non-stop barrage of pounding drums, punches and kicks. The subwoofer integrates well with the front channels, and rarely overpowers the other speakers. Sometimes a little more subtlety and agility wouldn’t go amiss, but on the whole it exceeds expectations. 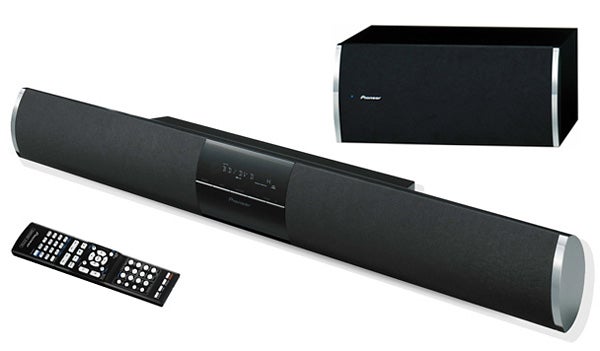 But it’s not all a bed of roses. Switch to the Front Stage Surround Advance mode and the sound becomes harder and less comfortable on the ear – at loud volumes, blokes shouting at the top of their voices made us wince, while clashing metal sounds bright.


And sadly the processing doesn’t make rear effects any more immersive. As arrows rain down around the Spartans, the effects are contained at the front of the room, although to be fair it does achieve a very convincing sense of width. We’re also not completely sold on dialogue clarity either, which sounds a little muffled.


For a break from all the aggression we switched to Corinne Bailey Rae’s ”The Sea” on CD and weren’t overly impressed. The subwoofer is the main problem – it heavy-handedly gatecrashes the delicate ”I’d Do It All Again”, then goes into overdrive during the more uptempo numbers like ”The Blackest Lily”, drowning out the musical intricacies. But turn off the sub and the sound is too thin, leaving you between a rock and a hard place. Playing with the LFE Attenuator and turning off the Loudness mode help, but on the whole we’re looking for a more open, spacious performance than this.


There are many things to admire about the HTP-SB300, such as the inclusion of HDMI inputs, Dolby TrueHD decoding and a wireless subwoofer, all of which helps explain why the price tag pushes £500. It’s also beautifully made and the compact subwoofer is a real bonus if space is tight.


But on the downside, it’s not the most user-friendly soundbar we’ve come across and the sound quality is surprisingly disappointing for a Pioneer product. Provided you avoid the Front Stage Surround Advance, movies sound fine, benefiting from the system’s powerful sound and spacious front soundstage. But music playback is disappointing, mostly due to the overbearing sub. It’s no disaster, but we’ve heard better from soundbars like the Teufel Cinebar 50 and Yamaha YHT-S400.