With every consumer electronics manufacturer scrambling to cut costs and drop prices, it makes a refreshing change to see Pioneer going in the opposite direction. We’ve already seen the company’s ‘no expense spared’ ethos with its premium line of Kuro plasmas, but now Pioneer appears to be taking the same approach with its DVD/hard-disk recorders.

But boy does it justify that price tag. At its heart is a colossal 500GB hard-disk – currently the largest capacity available on a HDD/DVD recorder – and a DVB-T tuner, the combination of which makes this a highly versatile PVR with functions like pause live TV and chase playback. But the deck can also record onto any type of recordable DVD, including DVD-RAM, DVD+RW/+R, DVD-RW/-R and dual-layer DVD+R and DVD-R discs.


On a more superficial note, the DVR-LX70D is a real stunner, boasting a luxurious black finish to match Pioneer’s plasma sets, alluring blue lights and a flap that hides a plethora of goodies (more on these later).


The DVR-LX70D is far more than just a digital recorder. You can use the unit as a digital music jukebox by transferring MP3, WMA and JPEG files onto the hard disk in one of two ways: by copying the files from a disc, or plugging your PC (running Window Media Player) into one of the two front-mounted USB ports.

You can also play MP3 and WMA files from USB memory devices and portable media players, or DivX files from CD-R or CD-RW. And here’s a nifty feature – when you load a CD, the deck’s built-in Gracenote database automatically displays the artist and track names without an Internet connection in sight.


Also found on the front panel is a card module slot for adding pay TV channels like Setanta Sports, an i.Link input for hooking up a DV camcorder plus S-video, composite and stereo audio inputs. The back panel features an HDMI v1.3 output which offers 576i, 576p, 720p, 1080i and 1080p output, alongside component video, RGB SCART and coaxial digital audio outputs. If you’re using an external digital TV receiver instead of the built-in Freeview tuner, the signal can be fed into the SCART input and recorded in glorious RGB. One slight disappointment is the lack of proper network connectivity as found on Pioneer’s Blu-ray player, but perhaps that’s asking too much!

The hard-disk will hold up to 1,422 hours of TV (roughly the same as a month’s worth of Friends repeats on E4) but the amount of recording time depends on which recording mode you’re using. In this respect the unit is very flexible – there are six preset recording modes (XP, SP, LP, EP, SLP, SEP) offering between 106 and 1,064 hours of recording time on the hard-disk. But it also offers a manual recording system, which features 32 steps covering the bitrates in between the presets, plus two higher quality modes: a version of XP with LPCM audio encoding instead of two-channel Dolby Digital, and XP+, which is only available for hard-disk recording and is best suited to DV camcorder footage.


Your recordings can be chopped and trimmed to perfection using the deck’s vast array of editing features. You can erase a section (annoying adverts, for example), divide a title, edit chapter points, change the thumbnail on the Disc Navigator menu and rename recordings. There’s even an automatic chapter mode that inserts chapters at natural breaks in the programme, which isn’t fail safe but works generally well. However, you can’t create Playlists as you can on most other HDD recorders, which may come as a disappointment to those hoping to piece together their own home movies from camcorder footage.

Recordings can also be copied from the hard-disk to DVD at high speed (even while recording something else), plus there’s a back-up facility for duplicating home-made DVDs. Elsewhere, there’s a superb range of Freeview-related features, including a wonderfully intuitive seven-day EPG, which lets you set timer recordings at the touch of a button – and because start and end times are tied to the actual broadcast, you won’t miss any of the programme if the schedule slips.


Even more pleasing is the inclusion of Series Recording, which as the name suggests, automatically records every episode of a particular programme and will recommend repeats in case of schedule clashes.


We’re extremely impressed by how slick this recorder is to use. The onscreen menus are among the best we’ve ever encountered, all of which use welcoming pastel shades, attractive icons and intelligent submenu arrangement. The Disc Navigator, in particular is a masterclass in onscreen design, using moving thumbnails and allowing you to group recordings by genre. 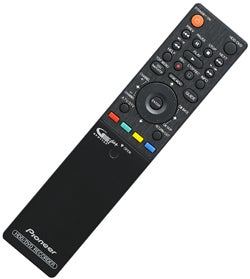 Ease of use is boosted by a very well-designed remote, which feels weighty and looks unusually attractive. It hides lesser-used buttons under a flap at the bottom and uses a novel jog dial for scrolling through menu options and changing channels. This is mostly effective, but it’s easy to turn it accidentally and select the wrong option.


Some other aspects of the operating system grate – you can’t access the EPG or switch to the analogue tuner when making a digital TV recording, which makes the lack of a second digital tuner all the more restrictive. Also, the unit is equipped with Guide Plus+, the EPG that makes timer recordings from the analogue tuner and external satellite and cable boxes. A useful inclusion perhaps, but it’s cumbersome compared with the Freeview EPG and requires an inconvenient setup procedure that involves entering your postcode and waiting for channels to download overnight.

There can be no complaints with the unit’s performance. Live TV pictures from the built-in Freeview tuner look magnificent and the deck’s competent MPEG-2 encoding ensures that they remain exactly the same when recorded on the hard disk or DVD.


Using BBC News 24 as our test channel, recordings are dazzlingly crisp and bright in XP+ or XP mode. The channel’s bright red onscreen graphics look consistently bold without any trace of edge bleed, while black objects look punchy but detailed – it was possible to make out the pinstripes on a weatherman’s black suit jacket, along with the creases, folds and shadows in the material. Scrolling text and moving objects look smooth and skin tones are subtle and realistic.


Dropping to SP reveals only a slight fall in quality, but in LP mode the presenters’ faces start looking hazier, edges look jagged with a smudgy haze around them and particularly detail-packed or fast-moving scenes look blocky and twitchy.

SLP and SEP appear even more gauzy and flickery, almost to the point where prolonged viewing might drive you mad, but it could come in handy for emergency use in the unlikely event that the HDD is almost full.


The DVR-LX70D is also a fine DVD player. Our ”Superman Returns” disc enjoyed a high level of detail when boosted to 1080p on a Full HD TV, and colour saturation is high, as demonstrated by its handling of Superman’s iconic costume.


Running through our repertoire of digital media files reveals no glitches with any of the compatible file types, whether played from disc, USB or the hard disk. And the extensive video wizardry on board doesn’t mean that Pioneer has forgotten about audio. The deck turns in a decent performance with George Benson’s ”Breezin‘” on CD via the analogue outputs, with the light jazz-funk sounding tight and energetic. Movies also sound great via the digital audio output, provided your cinema system is up to scratch.


Pioneer has come out with all guns blazing with the DVR-LX70D and really hits the target. The array of features on offer is mind-blowing, the superb user interface makes it a joy to use and the quality of recordings is second to none. There are a few minor grievances and omissions but nothing that stops us hailing this recorder as a complete triumph.


Penny-pinchers might moan about the price tag, which is more than double that of rivals from the likes of Sony and Panasonic, but Pioneer isn’t interested in competing with them. This high-end, high-performance deck is an unashamed slice of luxury – and on that basis we love it.