Nowadays, DVD players are a dime a dozen, with decks being sold in supermarkets and online for absolute peanuts. So with that in mind, is there really any sense in selling a DVD deck costing upwards of £400? Well, yes there is actually. Hardcore home cinema fans with expensive projectors and mega-screen flat-panel TVs need a top-quality video source to feed into them, one that boasts the finest components and the best build quality – virtues you simply won’t get from a cheapo supermarket deck.


Pioneer has been specialising in high-end DVD players like this for some time, and its latest flagship model is aiming to keep the company’s fine reputation intact. The DV-LX50 is a universal player, which means it plays DVD-Audio and SACD as well as DVDs and CDs. This makes it not only the perfect deck for videophiles but music lovers too.

But one of the most impressive aspects of the DV-LX50 is its flawless build quality, the foundation of which is a rigid, double-layered chassis that allows the disc mechanism and optical pick-up to operate with maximum stability. As a result, this isn’t one of those wafer-thin, lightweight decks – it’s big, chunky, heavy and proud of it.


Not only is it robustly built but it’s also completely gorgeous, sporting that classic Pioneer piano black finish, a fetching blue light and a couple of delightful silver rings on the fascia surrounding the power and play buttons.

The rear panel is equally attractive from a practical perspective, reading like an A to Z of AV connections. Taking centre stage is the HDMI output, capable of feeding upscaled 1080i/p, 720p 576i/p signals to an HDMI-equipped display. And thanks to HDMI control, the unit can also be operated by the remote handset of an HDMI-equipped TV. It’s backed up by progressive-scan capable component output, plus composite, S-video and an RGB-capable SCART output.


On the audio side, you can feed Dolby Digital and DTS bitstreams to an AV receiver from either the coaxial or optical digital audio outputs, and there’s a set of 5.1-channel analogue outputs to take advantage of the built-in Dolby Digital, DTS, DVD-Audio and SACD decoders. There’s also an extra set of analogue stereo outputs for straight CD playback, and when using any of the analogue audio outputs you can select Pure Audio mode, which switches off the video and digital audio circuits to minimise interference.

Like all Pioneer DVD-based products, the DV-LX50 boasts wide compatibility with digital media formats, including all versions of DivX, MP3, WMA and hi-res JPEGs. Aside from these fairly common file types, the Pioneer will also play lesser supported formats like WMV and MPEG-4 AAC as used by iTunes, but it won’t play copy-protected files (bought from the iTunes Store, for example) so you’ll have to stick to home-ripped music.


As for disc compatibility, the unit supports DVD-R, DVD-RW, DVD+R, DVD+RW and the dual-layer variants of these four formats, plus CD-R/RW, Super Video CD and Video CD.

Elsewhere, you’ll find a range of advanced picture and sound tweaks that let you fine tune picture and sound quality. Delve into the Video Adjust menu and the deck allows you to adjust sharpness, brightness, contrast, gamma, hue, chroma level and block noise reduction – basically the sort of flexibility that you don’t find on most budget players.


Audiophiles can also twiddle to their heart’s content. There are basic bass management facilities where you can input the size of your speakers, the distance between the speakers and the listening position. 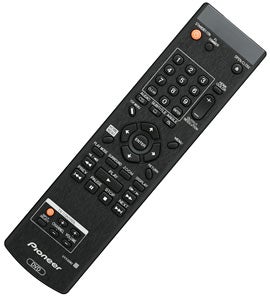 Based on the evidence so far, it was with a great deal of excitement and anticipation that we loaded our first DVD into the smooth disc tray – and we were not disappointed. With a 46in 1080p Toshiba LCD as our display of choice, the DV-LX50 conjures up the sort of polished pictures that only heavyweight decks like this seem capable of. The trusty ”Lord of the Rings: The Two Towers” disc looks fantastic with the upscaling set to 1080p – the opening helicopter shots over Middle Earth’s mountains reveal smooth motion and a lack of conversion artefacts. So crisp and transparent is the deck’s upscaled DVD picture quality in fact, that there are times when you have to remind yourself that you’re not watching an HD picture.


Of course it depends on the disc – the Region 2 transfer of ”Spider-Man” looked decidedly soft, proving that the deck is no miracle worker, but feed it a decent quality transfer like ”LOTR” and the results are spellbinding.

Aside from sharp detail reproduction, there are other reasons why this deck is a winner. Its colour reproduction is spot-on, making tones look rich and vibrant when necessary but at the same time showing skill and sensitivity with trickier tones like the Elves’ pale skin. Add to that deep blacks, clear shadow detailing and a complete absence of MPEG artefacts, and that £400 really starts to look like money well spent.

Audio quality is also impressive by DVD player standards, lacing CDs with enough detail to make audio buffs sit up and take notice. But with DVD-Audio and SACD the LX50 really excels, particularly the multichannel SACD mix of Marvin Gaye’s ”Let’s Get It On”, which sounds silkier and more seductive than ever.


If you’re a discerning DVD fan for whom money is no object, then the DV-LX50 is a superb choice, offering some of the finest DVD upscaling we’ve seen at this price point. Yes you can buy a high-definition disc player for less, but we’ve yet to see an HD deck that can match the LX50’s feature list and file compatibility, proving that there’s life in the old DVD deck yet.