We all know that Pioneer can conjure up incredible high-end DVD players (Exhibit A: the DV-LX50) but when the company turns its attention to the lower end of the price scale, it gives the AV community cause to celebrate. Every year the Japanese brand packs its budget decks with a dazzling array of features that make them really stand out from the crowd, combining them with slick performance and unbeatable ease of use. But with several other players on the market from the likes of OPPO and Denon boasting similarly impressive attributes, does the DV-600AV do enough to keep the competition at arm’s length? Let’s find out…

It gets off to a great start in the looks department. It’s available in silver or black and both versions look slim and stylish, but to our eyes the silver model looks more attractive despite the current black renaissance. What jumps out is how busy the fascia is – Pioneer seems keen to remind you just what this bad boy can do, packing the front panel with more logos and labels than a WAG’s wardrobe. Surrounding the disc tray is an array of playback and menu keys for up-close control, plus you’ll also find a USB port nestling among them which enables you to connect USB pen drives or MP3 devices and play music and photos.

Perhaps the most amazing thing about the DV-600AV given its price is the inclusion of multichannel DVD-Audio and SACD playback, making it a great choice for music lovers as well as movie fans. There aren’t many ‘universal’ players at this price, a fact that earns the Pioneer a few more Brownie points.


But the compatibility list stretches even further. The extensive list of supported formats not only includes MP3, WMA, JPEG and all versions of DivX (with full Ultra certification), but also Windows Media Video (WMV) and MPEG-4 AAC files, the format used by iTunes – but it won’t play protected content, so don’t expect to play stuff you’ve bought from the iTunes Store. The player also supports all the common disc formats except DVD-RAM.

The rear panel is reassuringly busy, teeming with all the connections you need to integrate the player into your system. The standout is HDMI, which outputs all-digital video in 1080p, 1080i and 720p flavours and can also send DVD-A/SACD signals to your receiver. If your amp isn’t that advanced, then multichannel audio can be transferred using the 5.1-channel analogue outputs, which are also used to carry Dolby Digital and DTS soundtracks from the built-in decoders – another of this deck’s many talents. You can, of course, send Dolby Digital and DTS bitstreams to your amp digitally using either the optical or coaxial outputs.

Those with non-HDMI equipped TVs can use the RGB-capable SCART, component video, S-video or composite outputs (though we wouldn’t recommend the latter unless you absolutely have to).


Elsewhere you’ll discover some other nice features, such as the Video Adjust menu that lets you tweak the picture to perfection before it reaches your screen, plus bass management for multichannel audio playback and a range of DSP modes (Rock, Pop, Dance etc) that cater for wacky aural tastes.


As ever, the Pioneer’s user interface is exemplary. It revolves around the central Home Menu screen, which uses jazzy graphics and icons to make it look more sophisticated than the uninspiring GUIs found on too many other players. The layout is also easy to digest, breaking things down into the key areas to help you find things quickly. 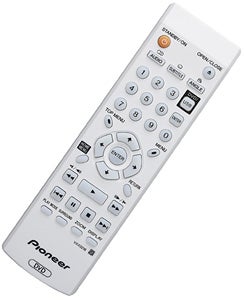 Despite the dodgy ghost-white finish, Pioneer also deserves praise for the remote’s instinctive operation thanks to the intelligently arranged and well-labelled buttons. It also helps that the unit is very responsive to remote commands.


And like the operating system, the unit’s performance is also faultless. With the HDMI output set to 1080p and viewed on a Full HD TV, the first thing to strike you is how deep and cinematic the picture looks. That’s due mainly to the excellent black level, which makes objects in the picture seem almost three-dimensional and boosts detail clarity.

The 1080p upscaling gives the picture a fresh, crisp appearance, which doesn’t quite look like high-definition but really brings out the best in the detail on offer. Try though we might, we couldn’t find any artefacts like jaggies or haloing around edges, and elsewhere MPEG noise is kept at bay, resulting in smooth movie playback. True cinephiles may feel inclined to pay more for a player with even better upscaling but for most needs this does a great job.

Colour reproduction is also magnificent, with the DV-600AV conveying the vivid, mind-warping palette of Tim Burton’s ”Charlie and the Chocolate Factory” with consummate ease without making it look garish or over-egged. But the deck is also sensitive enough to pick out the picture’s finer nuances, from the subtle shading on Johnny Depp’s pale face to the layered shadow detail lurking in the background at Charlie’s house.


The player also makes DVD-Audio and SACD playback sound sharp and silky enough to distinguish it from CD playback, effortlessly eking out the extra sonic detail contained in these hi-res discs. Again, golden-eared audiophiles might look for something a little more refined, but we think it works miracles for a deck costing little more than £100.


We wondered at the start of this review whether the DV-600AV has what it takes to stave off the challenge of players like the OPPO DV-980H or the Denon DVD-1940, and we can only conclude that it does. The key is price – at just over £100 online, it’s much cheaper than these two rivals but offers the same amount of features and doesn’t compromise its picture or sound quality in any way. So if you can’t be bothered with Blu-ray yet and want a DVD deck with 1080p upscaling, DVD-A/SACD support, a USB port and the ability to play a wide range of media formats, then do yourself and favour and give the DV-600AV a try – you won’t regret it.