With a couple of high-spec Blu-ray players due out later this year and a new range of cutting-edge plasma TVs about to hit the shops, no-one would blame Pioneer if the humble DVD player slipped down its list of priorities. But a DVD player market without Pioneer is like Man United without Alex Ferguson – it simply wouldn’t be the same without them. The company has a duty to its legions of fans to keep on producing standard-def decks that push the technological boundaries, and thankfully Pioneer keeps the flame burning brightly this year with another awesome range of players, recorders and systems.


Included in this line-up is the £90 DV-410V DVD player, the successor to last year’s excellent DV-400V, which knocked its budget competition for six with an unbeatable range of features and top-notch performance. At just under £90, the DV-410V looks like it offers more of the same great value for money without adding anything radical to the 400V’s already generous feature list. It’s joined in the range by the cheaper DV-310 and the step-up DV-610AV, which adds DVD-Audio and SACD playback.

In stark contrast to its bulky premium players, Pioneer’s budget decks are traditionally slim and snazzy and the DV-410V continues that trend. It’s certainly attractive, but in a way that will appeal to tech-geeks rather than interior designers. Available in black or silver, the deck harbours no minimalist pretentions – its fascia is unashamedly busy, packed with everything from menu controls and playback buttons to logos and a USB port, the latter allowing you to plug in memory sticks and other devices and play back digital media files.


Moving to the rear, the connection selection might seem a little light at first glance, but you’ll soon realise that it actually covers most bases. Of greatest interest to owners of flat-panel TVs and projectors is the HDMI input, which this time round is of the 1.3 variety, serving up what we hope will be pin-sharp digital pictures in 720p, 1080i and 1080p flavours.


It’s joined by an RGB and composite-enabled SCART socket, which is hanging on in there despite being an endangered species, plus component and composite video outputs. You can connect the deck to your AV receiver using the HDMI socket, analogue stereo outputs or the coaxial digital audio out (but bear in mind there’s no optical digital output for those that need it).

One of the DV-410’s most impressive talents is its ability to play a wide range of compressed formats, which includes less commonly supported WMV9 (sadly in standard-def only) and non copy protected AAC, the format used by iTunes. It also plays MP3 and WMA audio files, and for JPEG playback there’s a hi-res mode that displays photos without converting them to a lower resolution.

Furthermore, the player is DivX certified and will play any type of file up to v6, plus it supports VOD with a registration code. Any of these file types can be played back via the USB port, which spares you the rigmarole of loading up discs. The player can also handle any recordable CD or DVD format except DVD-RAM, and also accepts video CDs and Picture CDs.


Elsewhere Pioneer provides its usual level of picture-tweaking flexibility thanks to the Video Adjust menu, which makes it possible to alter the settings for brightness, sharpness, contrast, gamma, hue and chroma level. Audio-wise, you’ll find a range of Equalizer modes (Rock, Pop, Live – that sort of thing) plus Virtual Surround, dynamic range compression and a dialogue enhancer. 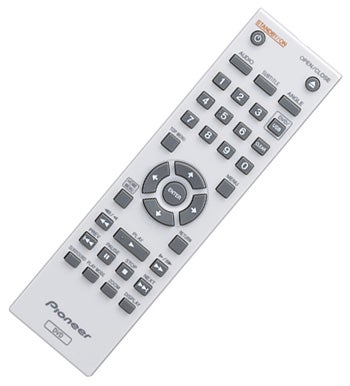 Changing these settings or altering the aspect ratio and HDMI resolution is an incredibly simple process thanks to the marvellous Home Menu system, which hasn’t been changed since last year’s models – if it ain’t broke, don’t fix it. The presentation is self-explanatory from the word go, splitting the options into logical groups and presenting them with welcoming colours and fonts, plus the entire operating system is blissfully fast.


Boosting the ease-of-use factor further is the remote, which aside from some slight cosmetic alterations looks exactly the same as previous Pioneer DVD handsets. Button placement is nigh-on perfect and everything is clearly labelled.

In terms of picture quality, the DV-410V isn’t the best we’ve seen from Pioneer but it does a pretty good job with the ”Gladiator” disc on our Toshiba 40ZF355D LCD set, bringing out most of the movie’s rich detail when boosted to 1080p. The scenes within the Roman coliseum are the most impressive, with the deck making light work of the various patterns and textures, such as the gladiators’ chain mail and the densely populated crowd.


Also impressive is the player’s reproduction of skin tones, which look utterly convincing throughout, and during the film’s brighter moments (like the gladiator training scenes) colours look radiant thanks to the deep black level that gives the image a dense and cinematic feel.

It’s not perfect though – the scene where Russell Crowe addresses his troops before the film’s opening battle is fairly noisy, with some ringing around certain outlines, while shots of wide open spaces like blue skies reveal some pulsing noise. But on the whole the Pioneer’s picture quality compares well with similarly priced players like the Samsung DVD-1080P8 or the Philips DVP5980.


We also ran through our gamut of test files and it played most of them without any problems, although we experienced a few lip sync problems with a couple of WMV files.


It boils down to one question: does the DV-410V deserve your hard-earned cash? The answer is a resounding yes. Picture and sound quality are impressive and there are more features on offer than you’d normally get for £90 – but if that price still seems steep remember that you’re getting a player from reputable and reliable manufacturer whose products stand the test of time – and on that basis the DV-410V is a sound investment.