The aim of this all-in-one cinema system is to bring Pioneer’s enviable video and audio prowess to an affordable price point and throw some useful features into the bargain. The system is made up of a combined DVD/CD/amplifier unit (XV-DV363), a passive subwoofer (S-DV370SW) and five tallboy speakers (S-DV370T), the latter making this look and feel more like a ‘serious’ home cinema system than many bookshelf-style systems.


The entire system is dressed in Pioneer’s customary piano black finish, which gives it a stylish yet unpretentious air. The main unit is surprisingly slim considering it houses the disc mechanism and amplification circuitry. Its eye-catching silver disc tray is a nice touch, and with only a light smattering of buttons on the front it looks pleasingly minimal. 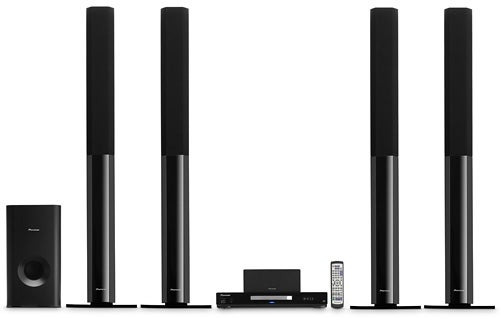 The S-DV370T speakers are each over a metre high and sturdily built, as is the unimposing subwoofer – though it’s lighter than you might expect a sub to be due to the lack of built-in amplification. The speakers and sub plug into the rear of the main unit using supplied colour-coded cables, making setup a quick and pain-free procedure.


The main unit is capable of delivering 60W per channel, matching the speakers’ maximum input power rating. It will willingly accept DVDs, CDs, Video CDs and Super Video CDs, plus it’ll decode DivX, MP3, WMA, JPEG and even non-DRM MPEG-4 AAC files from discs. It’s a shame Pioneer couldn’t squeeze DVD-Audio and SACD support onto the list but it was probably viewed as an unnecessary cost.


Music and photos can also be played back from a memory device plugged into the front-mounted USB port, which is a nice feature that makes it dead easy to transport content from your PC (but you can’t connect a PC directly).


Among the unit’s other talents are the ability to decode Dolby Digital and DTS soundtracks, plus Dolby Pro Logic II for turning stereo sources into 4.1 surround. There’s also a range of Sound Field Control (SFC) modes, two bass modes (for music and movies) and bass/treble adjustments. Sound can be tweaked to perfection using the built-in test tone.

On the rear panel is the all-important HDMI output, which offers 720p and 1080i signals, plus an RGB-capable SCART output, composite video out and stereo audio input/output. Disappointingly there’s no digital audio input for feeding in 5.1-channel soundtracks from a Sky+ box, but overall this is a decent selection of sockets.


Pioneer keeps faith with the Home Menu interface used to great effect on its standalone players and recorders, and rightly so – this is by far one of the best operating systems out there. Clearly designed, logical and attractive, it’s a perfect example of how to make a product easy to use. The remote does a good job too, but it’s packed with buttons, many of which are a little on the small side. 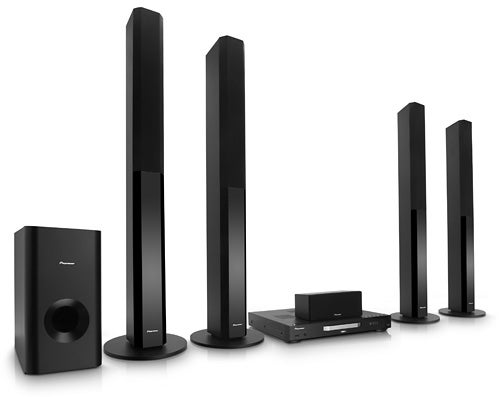 It may not be everyone’s favourite Star Wars movie but ”The Phantom Menace” sounds absolutely phenomenal through this system. Using the Podrace sequence as an obvious starting point, the DCS-370’s terrific tallboys reproduce every aspect of the soundtrack with gusto and power. As the pods tear round the Tattooine landscapes, the engine noises are meaty, direct and steered across the front stage with breathtaking clarity.


Likewise the rear channels, which produce crisp, well-separated surround effects that put you right in the middle of the race. Effects also pass smoothly between the rear pair creating a convincing sense of movement between them, while the centre channel generates crystal clear dialogue that’s easy to hear even during busy action scenes.


But the real star of the show is the subwoofer, which beefs up the bottom end without diverting attention away from the other channels. This helps all six speakers to fuse together beautifully, making it sound like one coherent whole as opposed to a bunch of disparate sounds. If we’re being picky, the system sounds a bit too brash at times, lacking the sense of sophistication and control that you’d get from separates or a more expensive system, but for just over £200 it would be unfair to complain.

Music playback also lacks the neutrality you’d get from the very best speakers but CDs are still highly enjoyable, as its warm and atmospheric rendition of Roxy Music’s ”Avalon” attests.


But there’s nothing unrefined about the DCS-370’s picture quality. The all-digital HDMI socket keeps the signal looking clean, and set to 1080i or 720p there are no upscaling artefacts to speak of. Meanwhile, strong colour saturation gives images an enjoyably dynamic appearance, best demonstrated by the vivid greens and blues of the planet Naboo in ”The Phantom Menace” – and we’re also impressed by the deck’s sharp detail reproduction.


To check the system’s handling of multimedia formats, we slotted a USB stick packed with MP3, WMA and JPEG files into the port on the front and the system had no trouble playing any of them. Music files encoded at 192kbps sound crisp and bassy, while JPEGs look sharp. 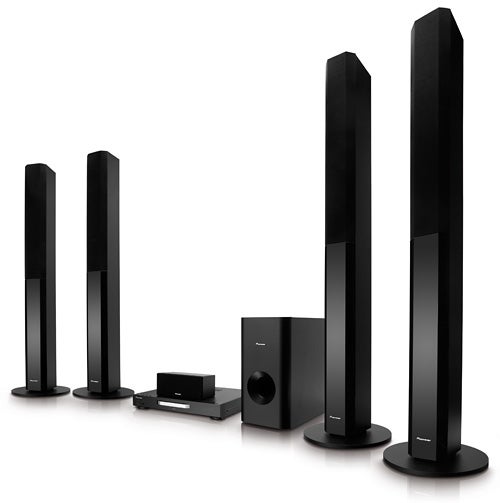 
Any system that boasts an attractive design, solid performance and a range of features that goes beyond the basics is worth a look, but when it costs just over £200 then it starts looking like excellent value for money. The DCS-370 does all of this, offering you a level of quality that you don’t often find at this price point. Features like a USB port, multimedia compatibility and video upscaling all count in its favour, while the powerful performance with both movies and music from the surprisingly accomplished tallboy speakers belie its budget price tag.


The system would have been considered even better value had it offered some sort of hi-res audio playback and 1080p upscaling, and despite boasting performance that beats most similarly priced systems hands down, it’s still a little rough round the edges compared with a decent separates system.


But these are minor complaints – on the whole this is a smashing system from a company that can do no wrong at the moment.