Two highly significant and related events occurred for me last year. The first was the birth of my son, followed a close second by the reluctant sale of my beloved pair of Technics SL-1200Mk2 turntables. The latter were the DJ decks of choice throughout the 80s and 90s, but sadly they and my extensive collection of 12in records had to go to make room for the growing mountain of baby paraphernalia.


So before I consigned the vinyl to the attic and the turntables to eBay, I spent every waking hour painstakingly transferring the entire collection – consisting largely of imported 90s dance music acquired while moonlighting as a club DJ – to MP3 format. An experience I hope never to repeat, but a necessary one nonetheless, as most of the records are impossible to find on CD or even download from specialist music sites. 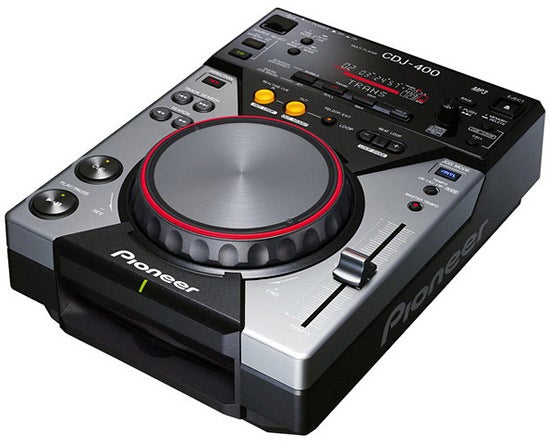 But back to the present. With the turntables gone, I’m left with a laptop full of rare house tunes seemingly never to be mixed again. So when the opportunity presented itself to try out Pioneer’s latest DJ-orientated CD deck I jumped at the chance.


Aimed at aspiring club DJs to use at home, the Pioneer CDJ-400 will play standard audio CDs as well as MP3s off CD-R/RW discs, but not DVDs. It will also play music directly from mass storage USB devices such as USB keys and external hard drives. Of course, like any gadget worth its salt these days, the CDJ-400 works fully with an iPod. 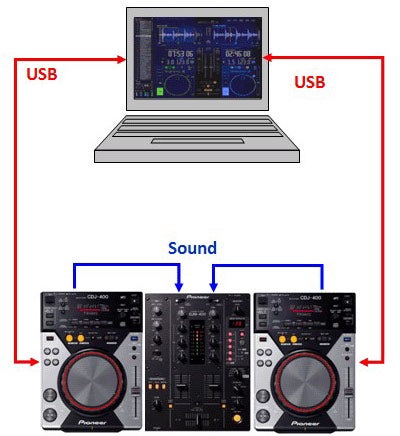 With a price tag of £449 (or £888.99 for a pair) the CDJ-400 is certainly not cheap, but what really sets it apart from other sub-£500 DJ decks is its PC mode. When connected via USB to a PC or Mac, practically all of the deck’s button and slider functions can be sent as MIDI data to control DJ mixing software such as Pioneer’s DJS or Serato Scratch LIVE. The CDJ-400 will also act as a USB sound device with both analogue and digital outputs, so you won’t need a separate sound card to connect up to your DJ mixer.


Unfortunately, software support for the CDJ-400 isn’t currently available but Pioneer inform us that the new compatible version of its own DJS software will be out in January 2008 – at an extra cost – closely followed by an update to Serato Scratch LIVE later in the year. So for this review I’ll be focusing on the Pioneer’s CD and MP3 playing capabilities.

Pioneer has based the layout of the CDJ-400 on its industry standard front loading CD deck, the CDJ-1000. Sitting proudly on the top facia is a pressure-sensitive jog dial, which can be toggled between Vinyl mode and standard CDJ mode via an illuminated button to the right of the jog dial. And just like the CDJ-1000, Vinyl mode allows you to scratch the audio playback just as though you were scratching a real record. When you touch the jog dial with your finger the music stops. Let it go and the music continues playing. Pitch bending in Vinyl mode is achieved using the outer edge of the jog dial only. Switching to CDJ mode, however, allows pitch bend to be performed with any part of the jog dial. 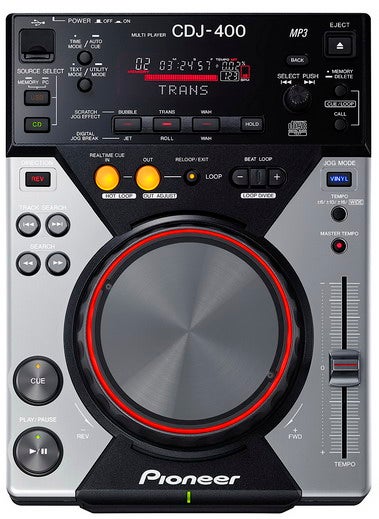 The jog dial is of the passive kind, which means it doesn’t automatically rotate like on some CD decks when music is playing. Instead, the outer edge of the dial is illuminated to simulate a moving platter, and you have the choice of six different light patterns. You can also personalise the jog dial by removing the transparent plastic top plate (using the supplied mini-screwdriver) and replacing the standard jog sheet with a design of your own.


Despite a plasticky finish and a lightweight feel, the CDJ-400 is put together well and should stand up to a fair amount of abuse by overzealous DJs. My main criticism with the design is the top-mounted USB port. Plug in a USB key and not only does it ruin the CDJ-400’s sleek looks, but it’s also just waiting to get snared up in cables or knocked and damaged. I would have preferred a rear-mounted USB port located close to the unit’s top edge for easy access. 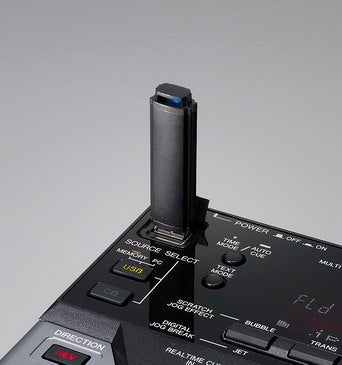 Situated directly above the jog dial are buttons to control the various digital loop functions. One neat feature is the Beat Loop/Loop Divide function, which automatically creates a four beat loop based on the Beats Per Minute (BPM) of the current track. A further press of the ‘-‘ button will divide the current loop, and pressing the ‘+’ button returns the loop to the original length. Naturally, you can still create your own loops manually using the separate IN and OUT buttons. The CDJ-400 will also store one cue or loop point in memory for each track, which can also be copied to another CDJ-400 via a USB memory device.

Switching between USB/PC and CD modes is straightforward enough using the dedicated Source Select buttons. I tested the CDJ-400 with a couple of different USB keys, an iPod video, several MP3 CD-ROM disks and some standard audio CDs, and it performed without a hitch. I did experience slightly longer start-up times when using a USB device, typically between 10-15 seconds, compared to around four seconds for CDs, but overall the unit felt very responsive in use. And as we’ve come to expect from Pioneer, sound quality from the CDJ-400 is excellent with kicking tracks like Armand Van Helden’s ”U Don’t Know Me” sounding dynamic and punchy without any harshness at the top end.

The other main controls are all where you’d expect them to be. The Tempo slider on the right hand side has a lovely smooth feel to it with a nice centre click. Its range can be toggled through ±6, ±10, ±16 and ±100% (the latter strangely referred to as WIDE) using the Tempo button, although if you’re using MP3s the WIDE option isn’t available. The Master Tempo button, which maintains the original key of the music regardless of the Tempo setting, can also be found just above the main slider. The sound quality of the Master Tempo is first rate, with no obvious digital artefacts within the ±10% range at least. 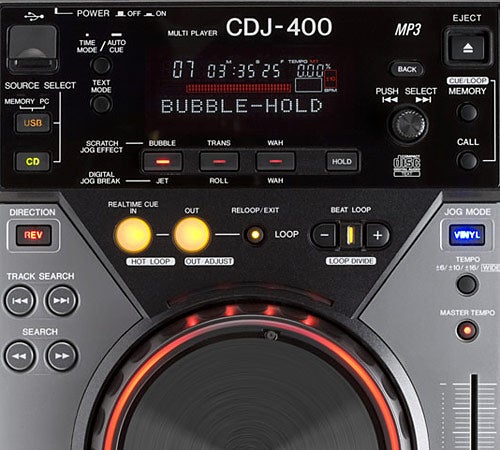 Tempo resolution is also very good, with steps of 0.02% at ±6% range which is ideal for keeping those long beat mixes in sync. Otherwise the slider moves in steps of 0.05% when set to ±10 or ±16%, and steps of 0.5% when set to WIDE. One function that is missing is a ‘brake’ effect that simulates the slow wind-down and start-up sound on a vinyl turntable, but you can always improvise using the Tempo slider in the WIDE mode.


To the left of the jog dial are the familiar Play/Pause, Cue, Search, Track Search and Reverse controls found on other Pioneer CDJ players. Turning the jog dial while holding down the search or track search buttons allows you to search much faster than normal. With the Auto Cue function enabled, the player automatically skips any silence at the start of a track and enters stand-by mode at the point when the music actually starts.

The main display, although relatively small in size, is clear and bright making all the essential data easily readable. Needless to say, the CDJ-400 will display CD TEXT or any ID3 tags that are present, as well any playlists you may have stored on your iPod. Navigation through files and folders couldn’t be simpler using the clickable rotary dial, and the Back button returns you to the next higher level in the folder hierarchy. Pressing the Text Mode button toggles between album, artist and track name, along with bit rate for MP3s. As well as the standard BPM counter, a horizontal bar graph provides a visual indication of the playback position within the current track, which also flashes when the track is about to finish. 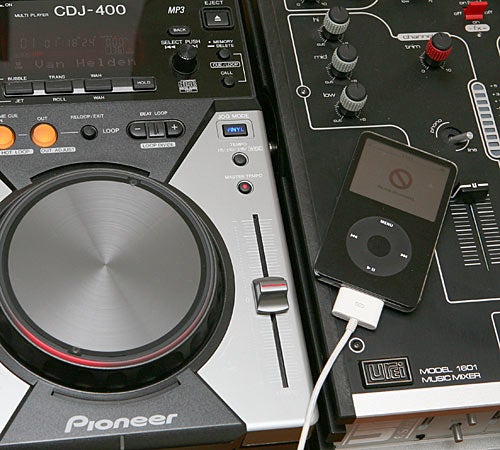 Sitting prominently below the display is the effects unit, which includes JET, WAH and ROLL effects in CDJ Mode, as well as BUBBLE, TRANS and WAH scratch effects in VINYL mode. Rather than describe what these effects actually sound like, check out the CDJ-400 demo by Pioneer’s Rik Parkinson. However, my personal view on these effects is to use them extremely sparingly in a live situation; otherwise they can quickly become tiresome and irritating.


The Pioneer CDJ-400 is an easy-to-use DJ CD player, providing comprehensive support for MP3 playback via both USB media and CD-ROM. There are cheaper MP3 CD decks out there, but none at this price range currently offer MIDI support. It might be too plasticky for some and it’s a shame a free copy (or a ‘Lite’ version) of Pioneer’s DJS mixing software isn’t included in the price, but the added bonus of vinyl emulation and the built-in effects unit help make the CDJ-400 a great mid-range buy.