While most manufacturers are busy driving down the price of their Blu-ray players, Pioneer is persisting with its policy of delivering the best performance no matter the cost. This gung-ho attitude is in evidence once again with its latest balls-to-the-wall hi-def disc spinner, which may cost about three times as much as the cheapest budget deck but for that price you’re getting a piece of pure home cinema heaven.


The BDP-LX71’s pedigree is clear the moment you lift it from the box. Its build quality is absolutely faultless, sporting an outer casing that seems to have been fashioned from the same stuff they used to make the Batsuit, while the double-layered chassis and rock-solid disc mechanism will be music to the ears of any videophile worried about vibration and jitter.

But if you’re into svelte, lightweight kit, forget it – this bad boy tips the scales at just over 6kg and its mega-chunky dimensions make it look like two players stacked on top of each other.


Aesthetically, it’s got Pioneer’s fingerprints all over it, and thanks to its glossy black fascia it’ll soon be covered in yours too. But it’s a small price to pay for such a seriously good-looking machine, which boasts loads of classy touches such as a silver trimmed play button, an alluring blue light and a row of touch-sensitive buttons that cause a white light to flash momentarily. The display panel is also a cut above the usual budget fare, showing title, chapter and time information in big, bold digits and even telling you the current output frequency.


Unlike its predecessor, the BDP-LX70, the LX71’s HDMI output is version 1.3, which brings with it goodies like 12-bit Deep Colour support, auto lip sync and HD audio bitstream output, plus KURO Link control from a Pioneer TV remote. Joining this all-digital connection is component video out, as well as the increasingly out of place S-video and composite sockets. On the audio side, there’s an isolated set of two-channel analogue outputs intended for CD playback, plus optical and coaxial digital audio outputs.

You’ll also find a set of 7.1-channel analogue outputs on the rear, which enable you to enjoy Dolby True HD and Dolby Digital Plus soundtracks in high-resolution on legacy amps without HDMI inputs. However you won’t be able to enjoy decoded DTS HD Master Audio or DTS HD tracks from these analogue outputs – instead it extracts the regular DTS core. Although this isn’t the end of the world, it is disappointing for a player at this price and means that you’ll need a receiver with HDMI input to enjoy both hi-res DTS formats.


But in its defence, this omission is not borne of nefarious intent – quite the opposite in fact. When designing the LX71, Pioneer changed the chipset found in the BDP-LX70 to an improved version that offers better picture performance and a greater range of image adjustments but lacks DTS HD MA from the analogue outputs. Pioneer felt the picture benefits were far more important, and rather than delay its launch by a few months to rectify the audio situation, it launched the player with the intention of releasing a firmware update later on, which is currently scheduled for February.

But in the meantime, those with suitably equipped receivers can pipe DTS HD Master Audio, Dolby True HD, Dolby Digital Plus and DTS HD in bitstream form to a receiver with the relevant decoding, plus it can decode these formats into high-resolution PCM and output them from the HDMI port.


Far more disappointing than its audio shortcomings is the player’s Profile 1.1 specification, which enables you to access BonusView content but not web-based BD Live goodies – a fact confirmed by the lack of an Ethernet port on the rear panel. With loads of BD Live discs now on sale, it’s amazing that a normally progressive company like Pioneer would release a premium player that can’t take full advantage of them, when there are players costing half as much that can.


But these niggles aside, the range of features is still pretty impressive. The deck plays DivX, MP3, WMA, AVCHD and most types of recordable disc, plus it cements its audiophile status with professional grade Wolfson DACs and a specially developed Precision Quartz Lock System (PQLS), which is designed to offer precise music CD playback via HDMI.


A rummage around in the setup menu confirms that this is a deck for serious Blu-ray aficionados. There are all sorts of tweaks and options that you simply don’t find on common or garden Blu-ray decks, including a bunch of options governing the behaviour of the HDMI output and a speaker setup screen for the analogue audio outputs.

The meticulous attention to detail continues with the Video Adjust menu, which enables you to match the player’s picture characteristics to those of your display. There are specific presets for Pioneer KURO plasma, a ‘regular’ plasma, an LCD set and a projector, plus three memory settings that allow you to alter the parameters yourself – and the list of tweakable options will send videophiles into rapture.


The look and layout of the user interface is stunning and matches the menu system found on Pioneer’s latest KURO plasma TVs, giving your system some very welcome uniformity if you’re lucky enough to be pairing it with one of their sets. The cursor darts around the menus with pleasing speed and the use of white text on a moody black background makes it easy to read. 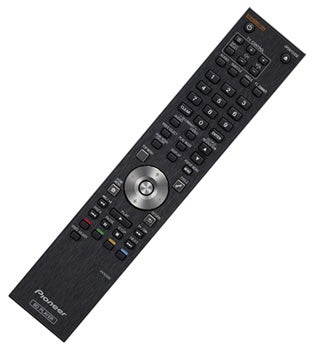 The attractive remote also plays its part in the LX71’s effortless operation, sporting clearly labelled, well-spaced buttons and excellent silver menu controls. There are keys to control of all the crucial functions, including up/down buttons to change the resolution as you watch, plus buttons to turn the BonusView secondary video and audio on and off. If we’re being honest, we’d like the buttons to have been a bit bigger but on the whole it’s a very likeable zapper.


The LX71’s disc loading times are a lot faster than its predecessor – with the ”Transformers” disc, we clocked it at 49 seconds from the moment we pressed the Close button to the disc’s language selection menu appearing on screen. With ”Spider-Man 3”, it took 1min 22 seconds for the Sony logo to appear. It’s a bit slow to skip chapters and move through the search speeds but we’ve yet to encounter a Blu-ray deck that does this as quickly as a DVD player.

To see LX71’s pictures at their best they should be viewed on a Pioneer KURO plasma, and we were lucky enough to get our hands on the company’s latest flagship set, the 60in KRP-600A. And from the moment ”Transformers” cranked into life, we were simply staggered by what we saw.


Most players do a decent job of bringing this disc’s abundant detail and lively colour palette to the screen, but few can do so with such intensity, depth and transparency. The richly textured robot CGI looks sharper than ever before, allowing every nut, bolt, scuff and scratch on Optimus Prime’s bodywork to be clearly visible.


But it’s not just stuff knocked up on an Apple Mac that looks great – the deck easily picks out the pockmarks and stubble on Shia LeBoeuf’s face, and lends his skin a satisfyingly realistic hue. Reproduction of bolder colours is also fantastic, with Bumblebee’s bright yellow paintwork jumping from the screen and Optimus Prime’s red and blue body looking deep and radiant, without a hint of garishness or edge bleed.


Skipping to the end battle scenes, the LX71 tracks the frenetic, fast-moving action without any sign of judder. The dense colours and solid blacks give long shots of the city streets a real sense of depth and distance, while the forceful detail handling continues to make those robots and the surrounding buildings look crisp and focused at all times.

We also slipped in the Silicon Optix HQV Benchmark Blu-ray disc and it blitzed all of the tests, with the most impressive achievement being its flawless suppression of jaggies during the rotating bar patterns – the stepping effect you get on several other players is completely smoothed out, testament to the superb video processing inside. Also remarkable is the film resolution loss test in which the camera pans across an empty stadium – we’ve never seen the rows of red seats looking sharper or steadier.


The LX71 treats DVDs with the same level of care and attention that it lavishes on Blu-ray discs, producing sharp, artefact-free playback with a wide range of movies. The DVD version of the HQV disc revealed the same assured performance as the hi-def version, marking this out as a remarkable DVD upscaler. 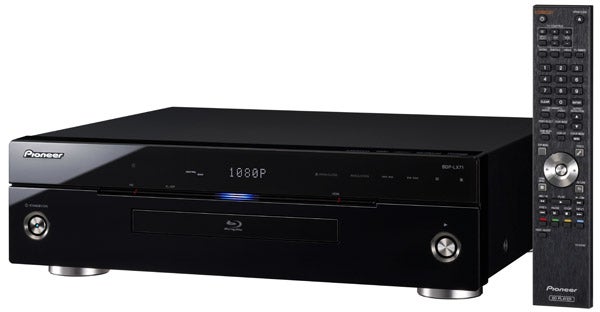 The LX71 gets a clean bill of health in the audio department too, offering an open and finely detailed presentation of Transformers’ Dolby True HD track through the analogue outputs. With the climactic showdown between Optimus and Megatron, its dynamic and expansive soundstage helps deliver the sense of grandeur and excitement that this scene deserves, and you can almost feel the deck savouring every gunshot, explosion and clank of metal. We also piped the signal in bitstream and PCM form to our Onkyo receiver over an HDMI connection and were equally blown away by what we heard.


Finally the Pioneer delivers one of the best music performances we’ve heard from a Blu-ray player, making Miles Davis’ ”Kind of Blue” sound wonderfully organic and detailed though the dedicated analogue stereo outputs.


If you’re serious about movies and want the very best Blu-ray performance, then look no further than the BDP-LX71. Its image quality is the best we’ve seen so far, beating even the best decks from Panasonic and Sony and leaving you in no doubt as to where that extra money has gone. It’s also a dab hand with DVDs, which is good news if you have a big collection of standard-def discs that you don’t want to replace.


What’s more, its build quality is immaculate, it looks gorgeous and its advanced picture adjustments make it a videophile’s dream deck. But don’t let its many positives make you lose sight of the fact that its feature set is far from perfect – the Profile 1.1 spec (with no chance of upgrading) means it will never let you enjoy the complete Blu-ray experience, and the lack of decoded DTS HD Master Audio from the analogue outputs – however limited its appeal may be – should have been included from the box at this sort of price.