Pioneer is to home cinema what Pele is to football, and every new product it launches is greeted with near-religious fervour. What inspires this level of devotion is the consistently high quality of its kit, particularly when it comes to Blu-ray – decks like the BDP-LX91 and BDP-51FD have raised the bar in terms of hi-def picture and sound quality at their respective price points, making them revered among home cinephiles.


For that reason, we’re chuffed to have the company’s hotly anticipated new Blu-ray player in our hands. The BDP-LX52 is one of three new players launched this summer, and is the best-specified (and therefore the most expensive) of the trio. Significantly the LX52, BDP-320 and entry-level BDP-120 are the first ‘affordable’ Profile 2.0 Pioneer players to emerge since the reference BDP-LX91 first added BD Live to the company’s arsenal.


It comes as no surprise to find that the BDP-LX52 looks remarkably similar to the company’s previous players. The combination of a deep gloss-black finish, ice-blue illumination and stylish silver play/power buttons are as much a trademark as the Pioneer name itself, and once again make the LX52 look gobsmackingly gorgeous.

We’d describe the look as ‘cinephile chic’ – moody and esoteric enough to please enthusiasts, but with a universal appeal that’ll look great in any living room. It’s also worth noting that Pioneer still isn’t interested in slimming down the size of its decks – at 83mm high the LX52 is far from wafer thin, which makes a refreshing change.


Around the back, the LX52 doesn’t offer the knockout selection of sockets we were expecting for the money, but it covers most bases. The biggest surprise is that there are no multichannel analogue outputs. The LX52 can decode Dolby True HD, DTS HD Master Audio, DTS HD High-Resolution Audio and Dolby Digital Plus into LPCM internally, but you’ll need an HDMI-equipped receiver to hear the results.


Although the growing number and increasing affordability of HDMI-equipped receivers out there makes the inclusion of analogue sockets less important than it used to be, there are still people who prefer to let their player do the decoding and will be disappointed by their omission.


However, the player’s HDMI v1.3 socket will output Dolby True HD, DTS HD Master Audio and any other format in bitstream form, which makes life nice and simple if you own a suitably-equipped receiver. Also on the rear are optical digital and analogue stereo outputs, component and composite video outputs, plus remote control and RS-232C ports.


An Ethernet socket is also provided, which lets you download BD Live content and firmware updates from the web. It’s a shame Pioneer hasn’t cottoned onto the fact that Wi-Fi is the way forward for BD Live – the feature will only catch on when people can connect to the web without an ugly, cumbersome cable trailing across the house (that’s what HomePlug adapters are for – ed.).


However, the deck takes a step in the right direction with 1GB of built-in memory for web downloads. If you need more storage, there’s a USB port on the back, which supports flash memory devices and external hard disks.

Unfortunately the USB port can’t be used to play back digital media, which is unusual for Pioneer. That means you have to load your files onto recordable DVD or CD before you can play them back. The deck supports DivX, MP3, WMA, JPEG and hi-def AVCHD video, all of which are played using the Home Media Gallery feature.


The LX52 also boasts Pioneer’s Precision Quartz Lock System, but this is the first deck that can apply it to multichannel LPCM sound as well as stereo. When connected to a PQLS-equipped receiver, this feature synchronises the digital clocks of both components to ensure jitter-free audio playback. The BDP-320 also offers PQLS, but only for stereo LPCM audio.


Among the other features are 1080/24p output, 48-bit Deep Colour support and KURO Link, which lets you control the player using the remote for a Pioneer TV. 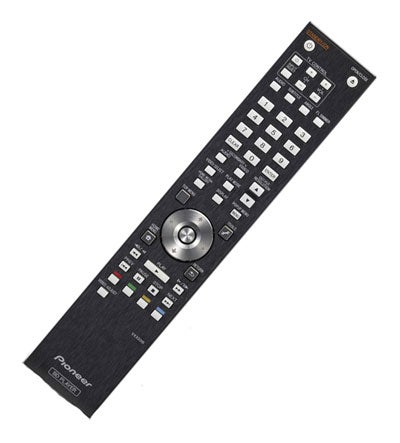 Despite being geared towards enthusiasts, the LX52 won’t overwhelm newcomers. Turn it on for the first time and it guides you through the initial settings, including menu language and which output terminals you want to use for audio and video.


Then it checks the audio connection with a test tone and offers a choice of picture presets that suit the type of display you’re using – features that show Pioneer really cares about getting the best possible performance from your system.


These display-specific presets (including modes for Pioneer LCDs, plasmas and projectors as well as separate settings for non-Pioneer and professional displays) can be found in the Video Adjust menu, alongside user-defined settings. These include four types of noise reduction, Gamma Correction for improving visibility in dark areas, a detail booster, white/black level adjustments and much more.


The results of your calibration can be saved in three memory positions, which are useful if you want to create presets for different room lighting conditions – day and night viewing, for example. We love this attention to detail and it makes the LX52 the ideal deck for those who are serious about home cinema.

The remote is also up to Pioneer’s usual high standards, not only looking gorgeous with its brushed finish and silver menu controls, but also boasting a thoughtful layout. It’s packed with buttons yet never feels cluttered and covers every conceivable function, including output resolution and BonusView secondary audio and video.


The Tools button provides quick access to a list of core settings, while Display brings up a useful onscreen banner showing time and chapter info, as well as the AV bitrates.


Past Pioneer players have been very slow to load discs and precious little progress has been made on that front. The LX52 took one minute and 10 seconds to get to Spider-Man 3’s Sony Pictures sting, and on a couple of occasions some handshaking problems between the player and Denon AVR-2310 made the process even longer. On a positive note, Pioneer has chucked in a Quick Start function which fires the player up from standby in eight seconds.

But to be honest, we’d wait all day to watch pictures as good as these. When Hellboy II eventually loaded up, it was clear right from the opening scene between John Hurt and a young Hellboy that we’re dealing with a Blu-ray superstar.


The LX52 nails the complex contrast between light and dark in this scene, giving the picture the sort of richness and depth that you simply don’t get from most budget players. In fact the entire movie looks absolutely divine – bright, punchy and crammed full of the cleanest, sharpest detail we’ve seen in a long time.


It’s hard to pick a stand-out scene, but Nuada’s entrance at the auction house comes pretty close. After the lights go out, the dark, dingy setting is boldly defined and not a single pixel goes AWOL amid the shadows. As Wink strides into the room, his grotesque frame is displayed warts ‘n’ all, while the sensitive shading and deft shadow work make him look solid and three dimensional, like he could jump from the screen at any moment.

Our other favourite scenes look similarly stunning, like Hellboy battling the Elemental or the trip to the Troll Market. Detail is rendered with definitive clarity, the colour palette is fulsome and natural, while blacks are punchy and insightful – all of which makes for one of the best Blu-ray pictures we’ve seen since… well, since the last Pioneer player we tested.


We also chucked I Am Legend into the tray for good measure and the LX52 displays the shots of New York with mesmerising depth and precision. Fast motion and camera pans are also fluid.


Next we loaded up the Silicon Optix Blu-ray disc and tweaked the noise reduction modes as it played the HD Noise clip. We marvelled at how effective they are at taming buzzing artefacts without significantly reducing picture sharpness.


It strolls through most of the other tests without any major problems. The moving bars on both jaggies patterns boast some of the smoothest and sharpest edges ever seen, while the Video Resolution loss test looks sharp and stable. However, the Film Resolution test briefly stutters every now and again and there are some waves of moiré noise as the camera reaches the end of its pan across the stadium. 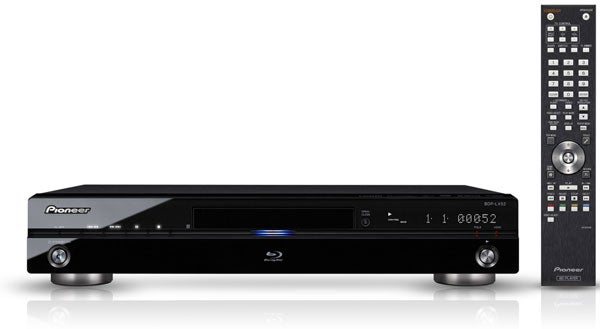 The LX52 is also a skilled DVD upscaler. Running the HQV DVD at 1080p, feathering and stepping are completely eliminated on the jaggies and flag tests, and detail is crisp throughout. It has trouble with the 2:2 Telecine B test but otherwise it’s an assured performance, which translates into superb movie playback – colours are convincing, edges look sharp and there’s bags of detail on offer, even during dark scenes.


For sound performance we go back to Hellboy’s battle with the Elemental and the LX52 works wonders with the DTS HD Master Audio track, whether it’s outputting the bitstream or decoded LPCM. Every scrap of sonic detail contained in this epic scene is conveyed with conviction, from the whirring of helicopter blades to the crashing of breaking glass, plus the expansive soundstage and clear dialogue provide further reasons to break out the chequebook.


The BDP-LX52’s relatively high price tag will no doubt limit its appeal to dedicated home cinema fans, but if you have the cash and care about AV performance then we guarantee you won’t be disappointed.


This deck has class coursing through its circuits, and delivers demonstrably superior picture performance to most of the budget players we’ve tested recently. Its BD Live support, extensive video tweaks, suave looks and slick operating system don’t hurt either.


Only the slow loading times and lack of multichannel analogue outputs, USB media playback and Wi-Fi give us cause for complaint but the brilliance of everything else makes these drawbacks much easier to swallow.