Pioneer recently sealed the deal on its joint venture with Sharp, which will see the two AV giants pool their resources and produce optical disc products such as DVD recorders and Blu-ray players. That means the BDP-320 on test here could be one of the last all-Pioneer players we get to review, so let’s make the most of it.


The BDP-320 is the middle-man in Pioneer’s latest trio of players, sandwiched between the entry-level BDP-120 and the higher-spec BDP-LX52. Despite being about £150 cheaper than the BDP-LX52, the BDP-320 offers most of the same features, except for the anti-jitter Precision Quartz Lock System – the BDP-320 only supports this for two-channel LPCM and not multichannel signals like the LX52.

You don’t need to worry about Pioneer skimping on build quality at this lower price though. The player is rock solid from top to bottom and sports the ever-stylish gloss black finish that Pioneer is famous for. OK, so the fascia is a touch more plasticky than usual and it lacks some of the eye-catching detail found on the LX52, but it still puts most of its immediate competition to shame.


The biggest surprise on the rear panel is the lack of multichannel audio outputs, which may deter those who’d rather feed decoded analogue signals to their amplifier than a digital bitstream. But everything else appears to be in order, with a socket line-up that includes HDMI v1.3, component, composite and optical digital audio outputs. You also get an Ethernet port to download movie extras and firmware updates from the Internet, a USB port for expanding the BD Live storage capacity beyond the built-in 1GB, and a remote control port for custom install use.

Like the LX52, the BDP-320 won’t handle multimedia content stored on USB sticks, which is a let-down given that most other players are only too happy to let you plug ‘n’ play. Thankfully, format support from discs (using the Home Media Gallery feature) is decent enough, with a list that includes AVCHD, DivX, MP3, WMA and JPEG – although it’s not a patch on all-encompassing players like the OPPO BDP-831 (R.I.P.) and the LG BD390.


The BDP-320’s audio support is comprehensive, decoding all of the Blu-ray formats into LPCM or outputting them as a raw bitstream over HDMI. You also get a wide range of picture features including the excellent Video Adjust menu, which lets you tweak the picture across 13 different parameters and store them in three memory positions, and offers a range of presets for different types of display – Professional, PDP, LCD and Projector, as well as modes tailored towards Pioneer PDPs, LCDs and projectors.


The deck is also 48-bit Deep Colour ready, supports KURO Link HDMI CEC and upscales DVDs to 1080p. Not a bad feature-set on the whole, but it’s a shame Pioneer hasn’t been quicker to embrace Wi-Fi connectivity, which would make BD Live downloading a lot easier than the current wired configuration. Perhaps that’s something we’ll find on the first Pioneer/Sharp players?

We like Pioneer’s onscreen operating system, although it’s not quite the bright and breezy experience you get from an LG or Panasonic player. The main Home menu looks all grown up and sophisticated, draped in moody blacks and monochrome graphics that depict the selected option. It’s easy to follow and the setup menu covers a comprehensive range of settings, but it’s a touch sluggish to respond and the inability to change settings without stopping the movie first (and potentially losing your place) is as annoying as ever.


However, a bunch of onscreen displays can be called up during movie playback. The Tools button is the most useful, bringing up a scrolling list at the bottom of the screen that allows you to enter the Audio and Video Adjust menus, as well as activate subtitles, change audio tracks and alter the HDMI output resolution. Hitting Display brings up a banner at the top of the screen giving you information about the disc, including video and audio bitrates. 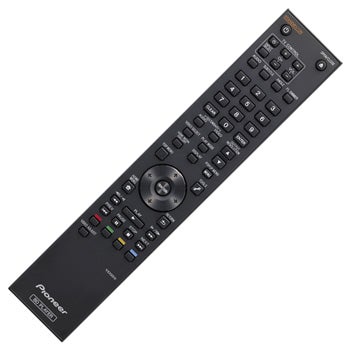 The substantial remote is roughly similar to that of the LX52, except the flashy silver ring of direction keys has been replaced by a black one and the glow-in-the-dark buttons are now black. It’s reasonably easy to use once you get used to it, although the fiddly, homogeneous buttons and muddled layout initially feels a bit cumbersome. There are dedicated buttons for almost every function – Video Adjust and HDMI resolution for instance – allowing for quick, easy access to the most-used functions.


Be warned though, the deck is quite slow to activate many of its functions, particularly Scan modes and chapter skipping. We also carried out our usual disc loading test with ”Spider-Man 3” and unsurprisingly the BDP-320 limped in with a time of one minute and 12 seconds, which is poor compared to some of the ultra-fast players around at the moment. Even worse was ”Angels & Demons” which started playing after a marathon one minute 55 seconds of waiting. Hopefully, sorting this issue will be high on Pioneer and Sharp’s ‘To Do’ list.

Thankfully, we can’t fault the quality once it finally gets the picture on screen. The BDP-320 brings all of Pioneer’s usual qualities to bear, such as deep blacks, impeccable detail retrieval, razor-sharp edges and a complete freedom from artefacts, all of which results in a picture that sizzles from the screen.


Its talents are demonstrated by the ”Angels & Demons” disc. The deck’s exceptional insight makes the insides of shadowy churches look crystal clear without destroying the dark, sinister atmosphere – the finest details, such as the texture of stone walls, are easy to discern amid the shadows and the corpse of the first murdered cardinal is revealed in all its gruesome glory. But when the action moves outside, Rome has never looked better – the vibrant, faithful colour reproduction and punchy detail give the city picture postcard appeal, and as Tom Hanks frantically dashes from church to church, the Pioneer tracks his motion without even the slightest stutter. 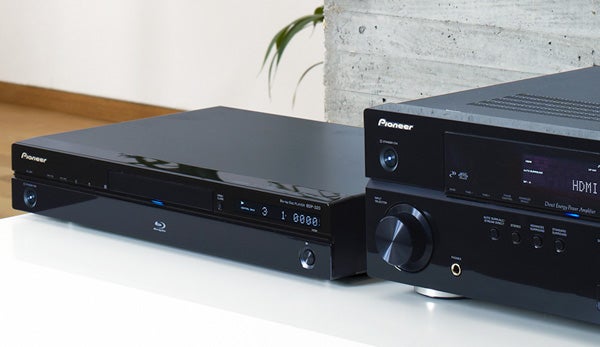 With the Silicon Optix HQV disc, it passes both Jaggies tests with ease, offering some of the smoothest moving diagonals we’ve seen, and detects the correct cadence of the Video Resolution Test instantly, rendering fine lines crisply and avoiding any strobing. The Film Resolution test threw up some strange results though – the picture was beset by a strange pulsing effect.


We’re happy to report that audio quality is of the highest order. It digs out lots of delicate detail from subtle jazz tunes, but really throws its weight behind more up-tempo pop and rock, conveying songs with a snappy, rhythmic tempo, crisp treble and a healthy dose of bass. Movies output in PCM or bitstream sounded incredible on our test system, although it does depend on the quality of your equipment.


The BDP-320 is another impressive Blu-ray deck from the Pioneer stable, which will appease discerning users with its incredible performance, extensive AV tweaks and solid build quality. That said, it’s not the easiest player to get along with – although it looks nice, much of the operating system is sluggish, plus discs take an age to load – and having got used to the brilliant LG BD390, the Pioneer’s feature list seems paltry by comparison, especially when you consider the price differential between them. But if you care not for bells and whistles and simply want a straight-up Blu-ray deck that delivers stunning picture quality, then the BDP-320 is certainly worth an audition.