We recently tested Pioneer’s BCS-303, a stylish all-in-one home cinema system that delivered decent (if not mind-blowing) surround sound and crisp hi-def pictures, all for a very reasonable price. As the BCS-303 showed, going down the all-in-one route doesn’t always get you the very best performance but does cut through the hassle that comes with buying separate components.


Here we’re testing another of Pioneer’s systems, the BCS-707, which is similar to the BCS-303 in most respects, except that its speaker configuration is considerably different. Whereas the BCS-303 came equipped with a set of five compact bookshelf speakers that you could perch discreetly around the room, the BCS-707 comes with four whacking great towers for the rear and front channels, which should make a real style statement when erected either side of a swanky flatpanel TV. 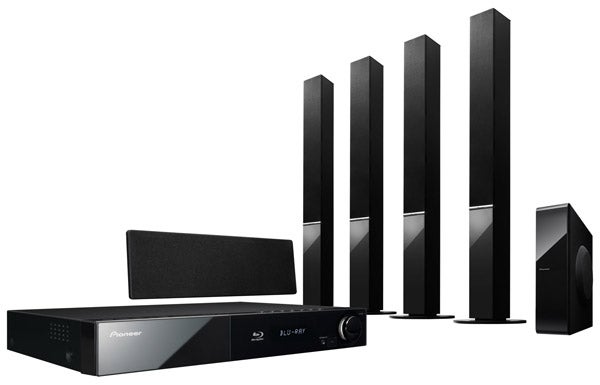 As you might expect at this sort of price, these tower speakers fall some way short of the meticulously robust build quality you get from the likes of Monitor Audio or Teufel, but the cabinets do feel reasonably solid and from a distance look rather attractive. The top half houses the drivers, which are covered by cloth grilles, while the gloss black panel at the bottom gives it a touch of contemporary class. Each tower needs to be screwed to a circular wooden base, rounding off the look nicely.


The speaker line-up is completed by a gloss-black centre speaker that’s compact enough to easily squeeze onto an AV rack shelf, and a slender passive subwoofer. It may be remarkably light and hollow but looks nice and the fact you can tuck it into a tight space is a real godsend. All of the cables you need are supplied in the box and connect to springclip terminals on the back of each speaker and on the main unit.


The combined Blu-ray player and receiver supplied here is the XV-BD707, the same unit used by the BCS-303 system. As we noted before, it takes no risks aesthetically with its straight lines and chunky dimensions (it measures 430(w) x 64(h) x 304(d)mm) but that doesn’t mean it’s not attractive – the snazzy gloss black finish and illuminated volume dial bring a bit of pizzazz. There’s a clear, easy-to-read display panel on the front, as well as a covered USB port and minijack input for an MP3 player. A row of small buttons runs along the top covering frequently used functions.

On the back you’ll find an HDMI output, which is specified as v1.3 so 3D playback is out of the question. Even more disappointing than that is the lack of HDMI inputs, which would have allowed you to switch external sources though the system, such as a PS3 and Sky box. However, if you want to feed audio signals into the Pioneer you can use the two optical digital or the analogue stereo inputs.


The rest of the sockets are run-of-the-mill – component and composite video outputs, FM aerial input and an Ethernet port for accessing the system’s network features, which include BD Live access and DLNA streaming from PCs and any other compatible devices you have hooked up. It’s the shame there’s no built-in Wi-Fi or support for a wireless USB adapter, which makes network installation a little more hassle than it should be.

Still, it’s nice to see media streaming on the feature list at this price. It works extremely well and supports a wide range of formats, including DivX Plus HD, MKV, MP3, WMA, JPEG and AAC. You can also play your files from USB storage devices and external HDDs using the front mounted port or rip CD tracks into MP3. The inclusion of an iPod dock in the box gives you yet another way of playing digital content, and it doesn’t stop there either – splash out on Pioneer’s Bluetooth adapter (AS-BT100) and you can stream music from phones and laptops too.


There’s plenty more too – Dolby TrueHD and DTS HD Master Audio decoding; more sound modes than you can shake a stick at (including ones for gaming, MP3 playback and a ‘Pioneer’ setting designed specifically for this system’s tower speakers); Dolby Pro Logic II; 1080p DVD upscaling; and a selection of picture presets that can be applied during movie playback by pressing the Display button, which brings up a handy sidebar menu.


Installation is simple. The Home Menu makes it clear where to find the setup menu, and once there all the options are laid out in a clear and easy to digest manner. The cursor is a little sluggish to move around though. Under the speaker setup section, you can tweak the distance and volume of each channel with a pretty graphic to help you, or you can simply hit the ‘Spk Level’ button on the remote and use the front panel display. It’s all fairly unsophisticated stuff but that’s what you want from a system aimed primarily at newcomers. The remote is nicely laid out, with large, clearly labelled buttons, which makes day-to-day operation a hassle-free business.


In our review of the BCS-303, we suspected that the main unit was a rebadged LG, and obviously, that applies here too. The remote, onscreen displays, sockets and design aspects of the main unit are identical to those found on LG’s systems from last year.

Obviously, we’re keen to discover how this system’s tower speakers perform in relation to the BCS-303’s compact satellites, and the good news is that they offer a slight improvement, although elsewhere the system suffers the same flaws.


But let’s start with the good stuff – with ”The Dark Knight” on Blu-ray, the system injects the Dolby TrueHD soundtrack with plenty of dynamism and zest, resulting in a crisp, sprightly sound. As the real and imitation Batmen fighting off the bad guys in the car park, the BCS-707 concocts an intoxicating mixture of snappy gunshots, meaty punches and screeching car tyres, while the stirring score chugs along urgently in the background. There’s some nice attention to detail too, like the chink of bullet cartridges hitting the floor and gentle echoes off the walls, plus the soundstage is expansive.


The centre channel also conveys speech clearly. Harvey Dent’s dialogue in the courtroom is prominent and articulate, and ‘s’ sounds are shaped without sibilance. Even Commissioner Gordon’s mumbly conversations with Dent are easy to hear. 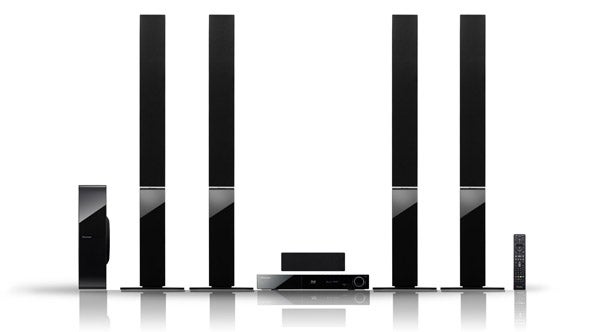 But the main problem is bass performance. The subwoofer overpowers the other speakers with its boomy output, and makes loud effects like explosions and shotgun blasts resonate for longer than they should – with more tautness and grip, bottom end performance could have been much more satisfying, but that’s not something passive all-in-one subs are known for.


And like so many all-in-one systems in this price bracket, the general feel of the sound is too boxed-in, lacking the openness and dazzling clarity you get from more serious speakers. The BCS-707 is only likely to satisfy the needs of casual listeners looking to improve on the sound offered by their TV speakers.


It’s much the same with music – when playing the gritty soul of John Legend & The Roots’ ”Wake Up!” on CD, the BCS-707 achieves a pleasant balance with clean top-end, smooth vocal reproduction and a tidy sense of rhythm and timing, but a lack of integration from the subwoofer and limited dynamics don’t always hit the spot.


There are no problems with Blu-ray picture quality though – the BCS-707 delivers super-sharp 1080p images with radiant colours and a contrast balance that keeps Gotham’s city streets looking suitably mean and menacing without losing sight of the detail contained within.


Provided you leave your audiophile aspirations at the door, the BCS-707 is a respectable home cinema system, especially at this price. There’s a decent selection of features, including DLNA networking, wide format support, lots of sound modes and a supplied iPod dock, plus it’s easy to set up and looks stylish with its moody, modern black finish.


But sadly, the cons outweigh the pros. There are no HDMI inputs, no support for Wi-Fi, 3D or web content (all of which are slowly becoming standard features on rival systems) and the speaker build quality isn’t the greatest. But the biggest disappointment is the sound quality, which is too boxy and bass-heavy to completely convince.