The BCS-323 has an impressive list of features. First up, there’s a built-in Wi-Fi (b/g/n) adapter allowing you to get online without having to run a LAN cable to your router – although the Ethernet port is there in case you need or prefer a wired connection.

When connected to a network you can stream videos from YouTube and view photos from Picasa. This selection pales in comparison to Samsung’s Smart Hub, Sony’s Entertainment Network or even Panasonic’s Viera Connect – all of which provide catch-up TV and on-demand movie services. But if you’re only going to have two online services, then YouTube is a good one to include.

The network connection also allows you to stream files from DLNA servers on your home network, with a list of supported formats that includes DivX HD, MP4, FLV, 3GP, WMV, AVI, MKV, MP3, WMA, WAV, AAC and JPEG. The only ones not supported over a network are FLAC, which may disappoint audiophiles, and AVCHD, but you can play them from connected USB devices or discs. We played a USB stick full of different formats and it played the lot of them with no fuss. 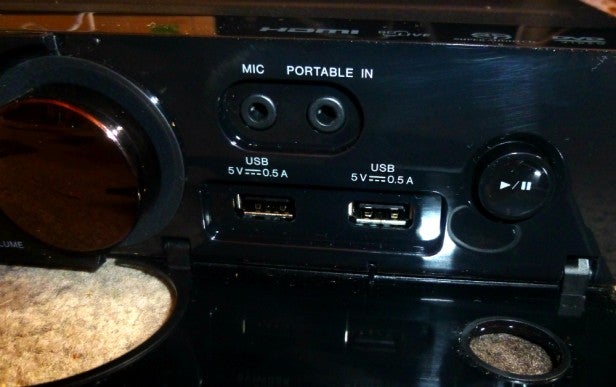 The system also plays SACDs, while on the Blu-ray side it plays 3D discs and decodes both Dolby True HD and DTS HD Master audio, plus all the related legacy formats. You can rip tracks from CD onto USB devices too, which might come in handy.

Total power output is quoted at 1100W, with 170W per channel for the fronts and rears, 250W for the centre and 250W to the sub. The speakers are all one-way affairs, each using a single full-range driver.

There’s a smattering of sound modes on board too, including Pioneer’s Virtual 3D Sound, which aims to expand the soundstage and create a more enveloping experience. There are News, Gaming, Movie and Music presets, while Advanced Sound Retriever boosts compressed music files back up to CD quality. Dolby Pro Logic II expands stereo material to 5.1 and the Karaoke mode offers echo control and a Vocal Cancel option.

Using the BCS-323 isn’t quite the slick, engaging experience you get from some rival systems, but the menu system is perfectly responsive and easy to follow.

A Setup Navigator fires up at the start, running through all the key settings, then it drops you off at the Home menu. The overall feel of the GUI is one of restraint and minimalism – no jazzy graphics or flashy animations. There’s just a black background with monochrome images and simple menu lists.

From here you can visit the Home Media Gallery, where you can explore media files on any connected device; jump to an input using the Source Menu; visit You Tube and Picasa under the ‘Web Contents’ menu; or make tweaks in the Initial Setup menu.

This thorough menu covers everything from HDMI and audio options to network setup and security. But of greatest use are the Video Adjust menu, which lets you tweak brightness, contrast, hue and saturation levels, and the speaker setup screen, which lets you adjust the level and delay of each channel. It’s a shame you can’t make these tweaks while a movie plays, but at least there’s a test tone to check the levels.

The Display Settings menu also offers a choice of picture presets (Standard, Vivid, Cinema) and a Custom mode, which duplicates the adjustments in the Video Adjust menu but adds sharpness and CTI (Colour Transient Improvement), which reduces banding on colour contours.

A trio of in-playback menus (Tools, Display and Sound) give you further control and provide details about the disc. The Sound menu lets you toggle through the system’s processing modes, including three levels of Virtual 3D.

It’s all controlled using a long, slender remote, which doesn’t cover itself in glory – the buttons are all identical and too small, it’s far too cluttered and the layout is jumbled. Worst of all is that the crucial volume keys blend in with al the others. On the plus side there’s a ‘Continued’ button that lets you resume playback from where you left off (not all discs do this as a matter of course).