Pioneer’s BCS-303 provides a convenient and cost effective way of getting a complete high-definition home cinema system in one fell swoop. Because the five satellite speakers (2 x front, centre, 2 x surround) are extremely compact, each one measuring just 96 x 96 x 85mm, it’s perfect for bedrooms or living rooms without an abundance of space. An alternative version of this system, the BCS-707, comes with two pairs of tall speakers for the front and rear channels.

The system comes in two boxes – inside one is the XV-BD707, a combined Blu-ray player and AV receiver, and in the other is the S-BD303 5.1 speaker system. The Blu-ray receiver is a straight-laced but fashionable-looking unit, coated in Pioneer’s regular gloss-black finish. Its build quality is superb by normal all-in-one standards mainly thanks to its robust aluminium top panel.

The fascia features an illuminated volume dial, covered USB port and MP3 player input on the right hand side, while a row of small playback buttons runs along the top for up-close control. On the back is a useful, if not comprehensive, line-up of sockets, including HDMI v1.3, component, composite and analogue stereo outputs, as well as two optical digital audio inputs for your external sources, an Ethernet port to tap into the unit’s networking capabilities and an aerial input for the built-in FM radio tuner. Unsurprisingly the terminals for the supplied speaker cables are springclips.

Not a bad selection then, but it’s a shame there are no HDMI inputs for passing other high-definition devices through the system. Not only would this have allowed you to switch between sources and take up just one HDMI input on your TV, but it would have also let you enjoy surround sound from those sources without rigging up a separate optical cable.

As for the speakers, the satellites are a step up from the usual light, plasticky boxes supplied with some all-in-one systems – they’re weighty and dressed in a classy gloss-black finish and a cloth grille on the front. That goes for the centre speaker too, which is elongated to fit into narrow AV rack shelves. At just 130mm wide, the side-firing subwoofer is one of the slimmest we’ve come across, which means it should be easy to accommodate. The front is styled in a matching gloss black finish, and the rear sports nothing except a springclip speaker terminal – par for the course for passive subs.

Rigging the whole thing up is a piece of cake, as the cables are all colour-coded to match the terminals on the back of the main unit. There’s no automatic calibration on board, which means you’ll have to tweak the sound manually if the factory settings don’t suffice, but the Speaker Setup section of the setup menu is easy to find, allowing you to adjust the volume and distance from listening position for each channel – a test tone lets you check the results as you go along.

There’s an surprisingly generous range of features on board, the highlight of which is the unit’s DLNA media streaming through the Ethernet port. The list of playable formats includes DivX Plus HD, MKV, MP3, WMA and JPEG, any of which can also be played back from USB storage devices and external HDDs (FAT16, FAT 32 and NTFS) via the front-mounted port.

In fact, the USB port is a talented blighter – with a USB device connected you can rip tracks from CDs into MP3 format, plus it’s used for BD Live storage as there’s no built-in memory. Sadly though, there’s no support for Wi-Fi dongles.


In the box, you’ll find an iPod dock, which lets you play music from your iPod or iPhone and control it using the system’s remote. You can even stream music from devices like mobiles, laptops, MP3 players and PDAs thanks to the built-in Bluetooth (A2DP) support. To use this function, you need to buy Pioneer’s optional AS-BT100 adapter and plug it into your external device. 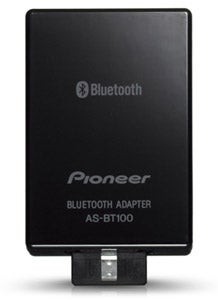 There’s also a range of ‘Sound Effect’ presets that can be toggled through using the dedicated button on the remote. There’s a choice of two ‘Pioneer’ settings – one designed for this system’s small speakers and one for the BCS-707’s tall speakers – as well as Bass Blast, PLII Movie/Music, Clear Voice (improving the clarity of speech), Game, Night, Music Retouch (for compressed music playback) and Loudness. Not a fan of DSPs? Then the Bypass mode will give it to you straight. On the visual side, there are some basic picture adjustments (contrast, brightness, colour, sharpness) and a few presets to choose from. 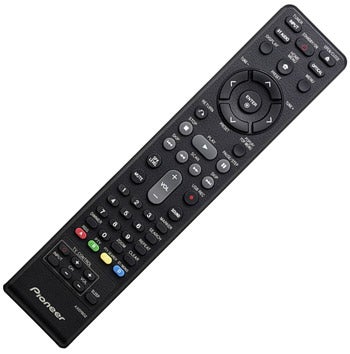 The BCS-303 features a very smartly presented menu system, which is exactly the same as the one found on LG’s players and systems last year. In fact, the remote and manual are exactly the same too, which makes us believe the Blu-ray receiver is an LG in disguise. Still, that’s not necessarily a bad thing, as the menus’ attractive icons and crisp fonts are a real joy, and the cursor reacts responsively. The MP3 and CD playback menus are pleasant to use too, listing songs clearly – it’s just a shame there’s no on-board Gracenote database to name tracks when you rip them.


The similarity to LG’s cinema systems and the inclusion of Home Link media streaming makes us wonder why Pioneer didn’t also provide an Internet streaming function, given that a) the company’s latest standalone player (BDP-330) already features YouTube access and b) most other home cinema systems offer some sort of web content.

Anyway, onto the more pressing matter of performance, and the system’s quoted 1,100W sounds optimistic but it certainly packs a punch when playing films like ”The Dark Knight”. Crank up the volume as little as halfway and it fills the room with a powerful sound, which comes into its own during the vehicle chase through Gotham. There’s a healthy dollop of bottom end beneath bazooka explosions, trucks smack into each other with a crisp, bracing crunch and the forceful reproduction of the thumping score is a visceral experience as well as an aural one.


Its handling of Dolby TrueHD’s high-resolution detail is also impressive. You can hear plenty of delicate high-frequency sounds during blistering action scenes and quieter passages, while dialogue is conveyed with openness and clarity.

It’s a forthright, dynamic sound but not one without problems. Although loud, the bass output isn’t as taut or focused as it should be. When Batman approaches Sal Maroni at the nightclub, the thumping dance music sounds resonant and boomy, overpowering the other effects, which happens with most bass-heavy action scenes. Thankfully, you can reduce the level but we could never quite get the sub and sats working in complete harmony.


We also tried out a selection of music CDs and the Pioneer delivers a pleasant if not mind-blowing sound. There’s a pleasing balance across the frequencies and vocals sound clear, yet the sound is a little too narrow and coloured to compete with more competent separates systems.


Picture-wise there are no flaws to report. The ”Dark Knight’s” dense, shadowy images are transferred to screen with admirable precision, maintaining that crucial sense of filmic depth, while colours are on point and all the detail within each 1080-line frame is resolved with entrancing sharpness. DVDs don’t dazzle in the same way, yet it does a fine job at keeping artefacts at bay when upscaling them to 1080p.


It may not be particularly dazzling in terms of looks, features or sound quality, but the BCS-303 is a decent, dependable all-in-one system that offers good value for money. The inclusion of media streaming, Bluetooth support, an iPod dock and a long list of playable media formats via USB all count in its favour, picture quality is superb and the compact speakers are wonderfully discreet. Wi-Fi support, HDMI inputs and better sound quality would have earned it even more Brownie points but on the whole this is a good effort.