There are three applications vying for the home video editing crown: Adobe’s Premiere Elements, Corel’s Ulead VideoStudio 11 Plus and the subject of this review, Pinnacle’s Studio 11 Plus. Now owned by Avid, a major player in professional video editing on both the hardware and software sides, Pinnacle has gleaned some of the code from more expensive Avid applications in putting together this new version. 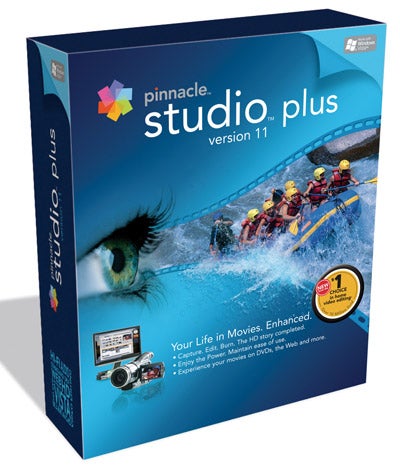 The main screen of Pinnacle Studio Plus 11 supports three main tabs, each of which controls one of the working modes of the program. The tabs are Capture, Edit and Make Movie and all benefit from new or improved features.


Capture is used for transferring DVD or video footage to a hard drive so you can edit it. The big news here is that version 11 of the program fully supports HD video. In particular, it supports Advanced Video Codec High Density (AVCHD) format files just beginning to appear in new Panasonic and Sony camcorders. This Blu-ray format is in addition to the native HDV support the program already had. You can import from tape, MiniDVD, camera-based hard drive or files already stored on your PC.


Assuming you have the necessary hardware, it’s now possible to edit HD video directly and save it as either MPEG-2 or MPEG-4 (including DivX). It’s worth noting that the MPEG-4 compression process can cut the bit rate (and file size) by as much as half for the same image quality as MPEG-2. 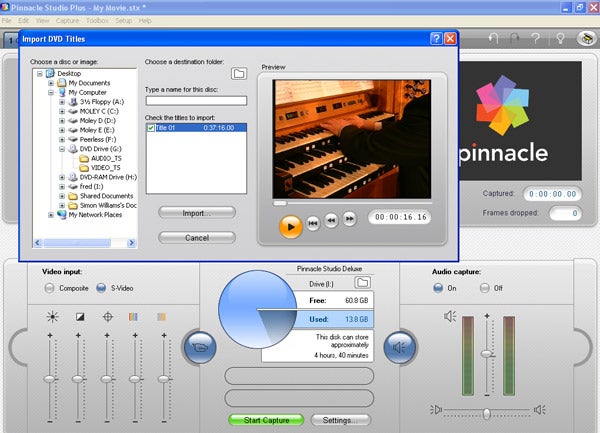 All this does require quite a potent PC. The recommended configuration includes a 2.4GHz Athlon or a 1.6GHz dual-core processor, with a 2.4GHz Core 2 Duo for AVCHD editing. You’ll need 1GB of memory for Windows XP or 2GB for Windows Vista (another reason to stick with XP?) and sufficient hard drive space to store 3.6MB/s – roughly 12.5GB per hour – if you’re working with HD.


The main editing screen hasn’t changed a lot. On the right is a preview panel where you can watch individual clips or edited sections of your video. To the left of that, by default, is the clip display from where thumbnails of individual scenes can be dragged directly into the bottom section of the screen.


The bottom section shows your building video in one of three ways. Timeline view shows the various video, overlay, effect, narration and soundtrack channels running in parallel against a time ruler along the top. You can switch to storyboard view, which shows the clips arranged chronologically and finally, there’s a file list showing the constituent clip files currently in your production.

There are a couple of interesting improvements to edit mode. The first takes advantage of widescreen displays thereby giving you more editing room to display clips or sections of a timeline – a first for a consumer video editor, yet an obvious improvement for a program which needs to display more data than a screen can hold.


The second improvement is Scorefitter – now bundled with Studio Plus 11 – for adding musical backgrounds to video. Cheesy, but this does a better job than most. You select the type of music, indicate how much of the video you want the track to cover and the software produces music of exactly that length. The instruments sound real and not like something out of a cheap, club keyboard. 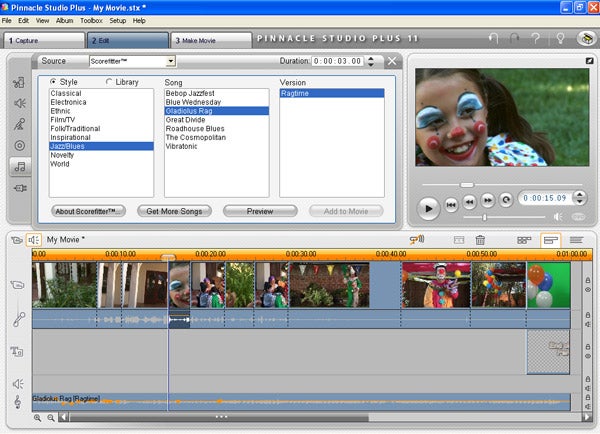 In the same way you could record short video to CDs before DVD rewriters really took off, short HD DVD clips can be saved to standard 4.7GB DVD discs. That’s if you don’t already have either an HD DVD or Blu-ray drive attached to your PC. You can squeeze up to 20 minutes or so of HD content onto a normal DVD.


If your thing is to go for Internet or MPEG playback rather than HD DVD, Studio Plus 11 helps there too. It now supports output to iPod and Sony PSP and has an improved Web interface so you can export directly to services such as Yahoo! Video. You simply click for the type of output you want: disk, file, tape or Web, and select the file type and a quality preset. It really is dead easy. 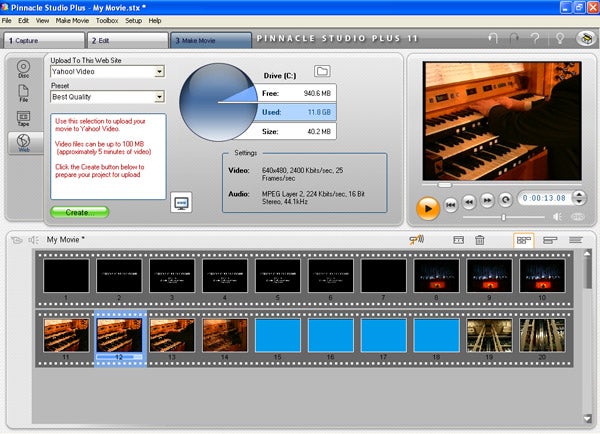 There are numerous other little improvements to the software, including literally hundreds of transitions and special effects, very easy titles and DVD front-end menus and advanced effects such as green screen Chroma Key, overlay channels and picture-in-picture.


By making most of the hard work in video editing transparent, Pinnacle has managed to keep the whole process of capturing, compiling and saving a video pretty painless. The new version of the software has boosted the program in line with current hardware developments and the full support for HD formats and best-selling media players keeps Studio well up there with its competition.