The importance of exploration makes Pikmin feel a little like a classic Metroid game. You know that there’s an area over there hiding fruit and other riches, but how do you reach it? What’s behind that gate you can’t currently bring down?

It also means that you don’t have to bang your head against a brick wall if a certain section is causing you grief. Fly somewhere else, collect some supplies and, who knows? The answer might suddenly hit you.

Whatever you’re doing, there’s always a drive to do better. There’s consistently too much to do during a day, so the secret becomes knowing when to split your forces and when to bring them together. To help, you can use the clever interactive map on the Wii U Pad’s touchscreen, particularly its handy ‘Go To’ feature, which allows you to issue commands to one astronaut and his Pikmin while you take direct control of another.

You don’t want to leave Pikmin behind at sundown, so you start developing strategies for mopping up the strays and getting everyone back on time. You begin planning each day on the map to make the most of fruit-collecting opportunities while still pushing for the big objectives. 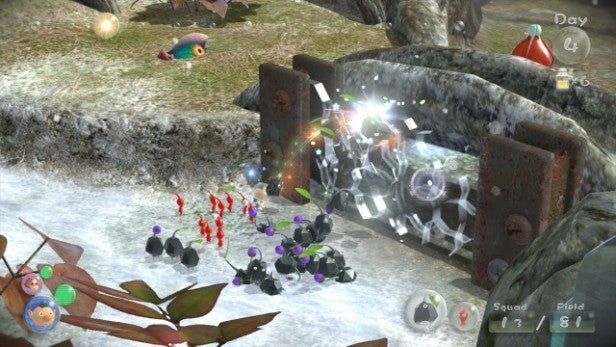 You’ll need all these skills towards the end of the game, as the pressure piles on and new challenges emerge. And by this time you’ll be absolutely hooked. Pikmin 3 might seem slight and charming, but underneath it’s a monster of a time-sink, sucking up every spare minute you have. You’ll be crying silent Hallelujahs that you can play it sans-TV using the Wii U Pad’s built-in display; you can sneak in games on the small screen while the big screen is otherwise occupied.

Pikmin 3 is a bit of a technical showcase for Wii U. It’s still very much in the classic Nintendo style, so we’re not talking Crysis 3 levels of photorealism, but there’s a detail to the textures and a beauty to the water and lighting effects that hasn’t been there before.

Depth of field effects are used brilliantly, and to an extent we haven’t really seen in a strategy game. Pikmin 3 is cartoony, but only in the way that a CGI animated movie is cartoony, and it looks absolutely gorgeous in HD. 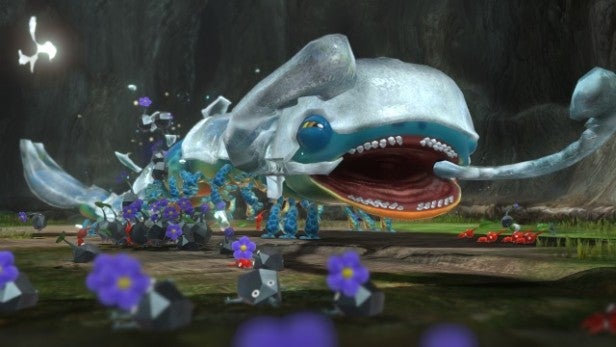 And while there’s something a little old-fashioned about the cut-scenes with their nonsense burbled dialogue and rather un-cinematic presentation, it’s all very charming. By the time you’re fifteen days in, you’ll care more about Alph, Brittany and the Captain, not to mention their Pikmin charges, than you will about most video-game protagonists.

Meanwhile, Nintendo’s love of detail extends to the sound. In Pikmin awareness is everything, and that you can often work out which Pikmin are in trouble and what they’re in trouble with from sound alone speaks volumes. Somebody could probably clone Pikmin on an iPad, but whether they could clone it with the same balance, the same intelligence and the way that attention is lavished on every last touch is a different thing entirely. 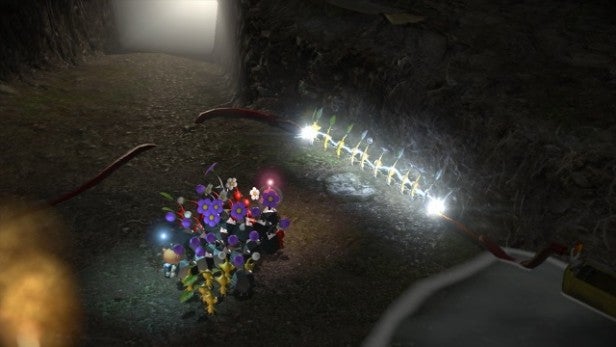 Pikmin 3 isn’t perfect. Repetition creeps in towards the end of the game, and Pikmin on their own or with an astronaut on a ‘go to’ mission are pitifully vulnerable, putting a little too much emphasis on mopping up and micromanagement at times. It’s ingenious and inventive, but hardly revolutionary. It is, however, close as damn it to being the perfect realisation of a great idea. It’s not the kind of game that will see a system like Wii U, but that doesn’t mean it’s not the kind of game that deserves to. 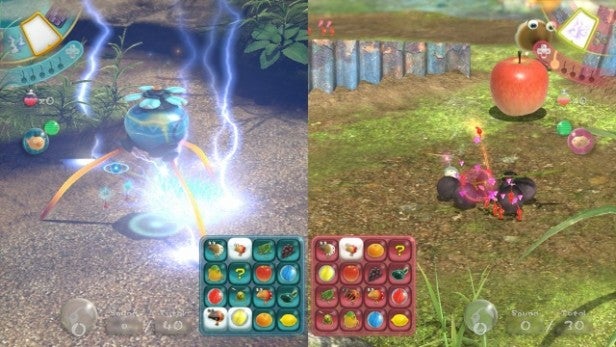 Should I Buy Pikmin 3?

If you’re planning to complete the game, find all the secrets and really home your Pikmin herding skills, then the main story mode will keep you busy for weeks if not months. On top of this, however, PIkmin 3 throws in a challenge mode, focusing on fruit-collecting, bug battling and boss-bug wrecking, and a two-player competitive mode.

Styled after Bingo, it has two astronauts and their colour-coded Pikmin fighting over fruit, with the aim being to complete a line on your bingo card. It’s offline and split-screen rather than online, which is a bit disappointing, but then it’s the kind of game best played against someone on the same sofa, anyway. Let’s face it, you can’t elbow an online opponent when they pinch your hard-won strawberry, can you?

Pikmin might not have the cachet of other Nintendo franchises, but Pikmin 3 deserves to change that. On the one hand it’s the best, most fully-realised version of Pikmin, with lovely HD graphics and richer gameplay than ever before. On the other it’s one of the few great titles on Wii U. It might not persuade anyone to buy the console, but it’s a must have for anyone who has already.