After all the recent doom and gloom about Wii U, Pikmin 3 is a timely reminder that Nintendo still does some things better than just about anyone else. It’s a bright and breezy game, easy to get into and effortlessly charming. It drip-feeds new ideas and mechanics at a pace most people will find comfortable, and looks like another cheerful, cuddly, family-friendly game.

Yet underneath that soft exterior, Pikmin 3 is a deep, challenging and surprisingly intricate game; one that doesn’t punish casual players, but still pushes your skills in time management, resource management and strategy. Like one of the great Pixar movies or a classic Simpsons episode, it’s both irresistibly lovable and dangerously smart. 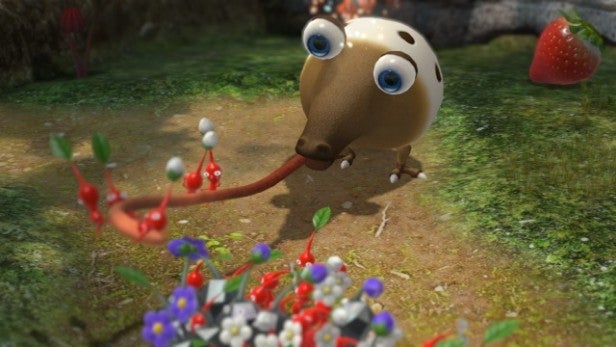 It’s also more than a retread of Pikmin 1 and 2. Of course, the core of the game seems identical. You control a cartoon astronaut on a world of oversized vegetation and equally giant bugs – the original was inspired by Shigeru Miyamoto’s observations of garden ants.

Alone your hero is almost helpless, but by picking and commanding groups of tiny plant-like critters – the Pikmin – he can battle the insects, destroy obstacles, build bridges and, most importantly, collect vital items and return them to the spaceship. Meanwhile, certain flowers and every bug corpse can be taken to a Pikmin base, known as an onion, where they will be converted into seedlings that sprout into more Pikmin.

On top of this there are some complications. There are different types of Pikmin, each with their own strengths and weaknesses which make them a better match for specific bugs, or which make them able to destroy certain barriers that block your way.

What’s more, your hero and his tiny troops are vulnerable after dark, so you have to round up all of your Pikmin before sunset or watch in horror as they’re gobbled up by hungry crawlers (a sight guaranteed to make you feel more guilty than any loss of human life in a conventional strategy game). Finally, Pikmin have their own upgrade system. If they can find and guzzle nectar, they grown flowers or bigger leaves and become more powerful. 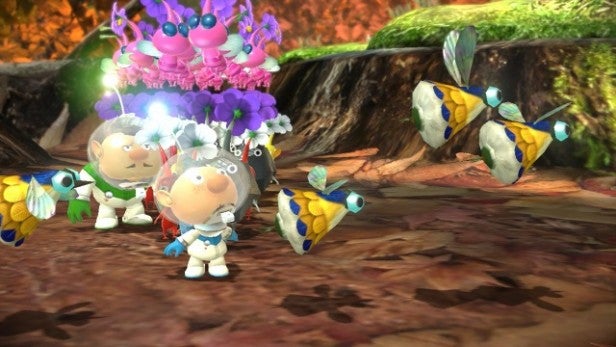 Pikmin 3 adds to the formula in a range of intelligent ways.
Pikmin 2 introduced a second astronaut, allowing you to switch between
the two to divide your workload. Pikmin 3 goes even further, not just
introducing a third astronaut, but adding the ability for one astronaut
to throw another and then making that a crucial part of the gameplay.

Pikmin 3 also revamps combat. It’s no longer enough to swarm the
Beasties; you have to think about where they’re vulnerable, which Pikmin
will deal them the most damage, and which Pikmin will survive any
attacks – like fire or electricity – they might unleash.

Most importantly, Pikmin 3 reintroduces the time limit that was removed with Pikmin 2. Pikmin 1 was notorious for having a strict thirty-day time limit. Fail to finish the game in thirty days and you’d be looking at restarting the whole shebang from scratch. Pikmin 2 dumped this draconian limit entirely, but lost a little of its urgency in the process.

Pikmin 3 finds a balance between the two. The premise is that this time your trio of astronauts, Alph, Brittany and Captain Charlie, are from a planet that is running out of food. They’re on the planet to find fruit and take it home, but they also need supplies of juice to survive themselves.

As a result, you need to balance your other objectives with restocking on your fruit every day and building up reserves, which works as a time limit without making every single day crucial. There is a bigger time limit beyond that, but not one that most people will find unreasonable, and if you waste a day Pikmin 3 allows you to go back and replay it – or to any earlier day – and carry on playing from that point. 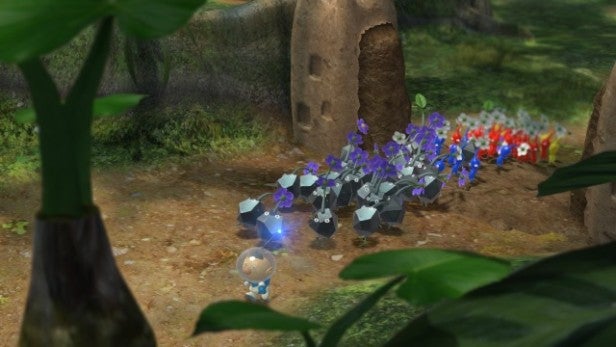 Beyond this, Pikmin 3 adds two new Pikmin: the winged Pikmin and the rock Pikmin. The former have an obvious advantage – they can fly over hazards and carry items through the air. The latter, serve as tough, heavy-hitting shock troops, do a great job of battering crystal structures, and can also pull airborne enemies to the ground, where your other Pikmin can gleefully swarm them.

All of this is brilliant, but what makes Pikmin 3 so deep and rewarding is that it’s got a sense of exploration and adventure that previous Pikmins didn’t really have. Every day you can choose which of the unlocked areas of the planet your spaceship lands in, and each has areas which you can’t access until you have a certain type of Pikmin, or which you’ll need two or more astronauts to reach, After all, to be thrown you need someone to throw you.

Next
Pikmin 3 – The Verdict Review