In the future, the advancement of technology could do many wondrous things for the human race. It could cure any number of hideous diseases. It could cut back on car accidents, giving us vehicles that drive themselves. It could make the population more productive, serving up robots to do menial tasks the world over. Oh, and it could also allow us to deliver pizzas in space.

Yes, you might find it hard to believe if you’ve ever sat in frustration waiting for the Crusty Crust take out around the corner to deliver your meat feast on time, but in the future, you’ll be able to order a four cheese while sat in your space station somewhere in the depths of space and expect it to be flung directly through your window in a matter of minutes. According to Pie in the Sky: A Pizza Odyssey, said delivery will be made via a car flying in amongst the stars, the planets, and the (copious numbers of) comets in the same amount of time it takes you to pick up your phone and make the order.

Or, if you’re feeling particularly cruel, rather than dressing Pie in the Sky up as a gargantuan galactic adventure, you could strip it down to its bare bones: it’s Atari’s 1980s classic Paperboy set in space. 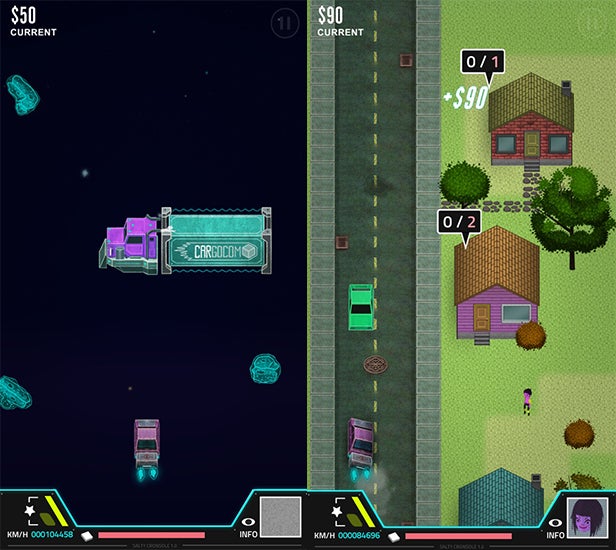 Paperboy without the controversy, however. Using the accelerometer to steer your way through the assortment of objects heading directly towards you, Pie in the Sky is an endless runner of sorts, with the course scrolling down from the top of the screen to the bottom. Your only inputs are to tip your phone to dodge the traffic and to fire out your pizza when prompted, tapping left or right to send it flying in that particular direction.

The more orders you fill (indicated by a number planted above each potential customer’s head), the more money you earn, with the obvious target being to get as many pizzas in the hands of as many people as you can while avoiding all the obstacles in your path, contact with which while unshielded can bring play to an end. These obstacles tend to come in streams, with Pie in the Sky splitting stages into sections where deliveries are the focus and section where weaving your way through waves of astronomical architecture is the goal. It’s the latter part that, ironically, really delivers.

Pie in the Sky is especially varied in the way it throws objects in your direction. Aside from general space traffic (cars darting across the screen with all the grace of your typical family looking to park their people carrier outside Tesco on a Saturday afternoon), there are barrages of meteors to contend with and physical gateways to pass through, all relying on your ability to react in quick time and utilising what it has to be said is an especially well-balanced and fluid use of the iPhone’s accelerometer. 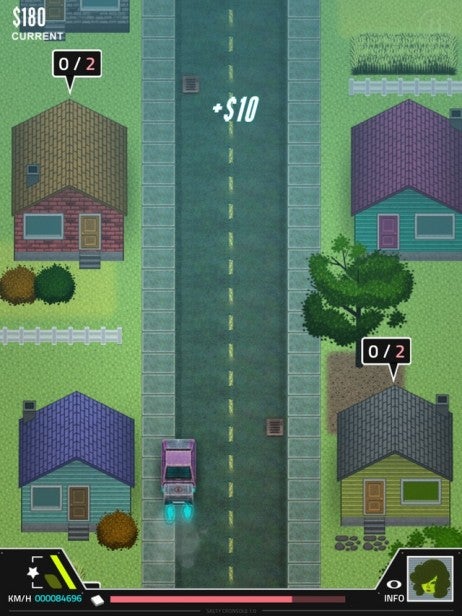 Add to this some seemingly random boss battles (which, though short, draw on staples from shoot-em-ups from decades past), and you have an entertaining – though often brief – endless runner. Things change a little when the actual delivery of pizzas comes into play, with the only goal being to time your taps so that the number of boxes you fling out of your window corresponds to the number of orders from each customer. Should they be after three pizzas, for instance, squeezing in the right number of taps before they disappear off the screen is no easy task – especially if the chap directly behind them has made an equally demanding order.

The other side to Pie in the Sky – aside from its brilliant 1980s styling and soundtrack – is the upgrade system that sits behind it. It lets you equip defences and power ups to your car to help it last longer in the onrush, and a pizza creation tool that both lets you charge more for successful deliveries and, if the dish you put together is especially original, share it across social networks for added amusement.

The end result is a charming endless runner with a nifty control system that, despite said pizza creation tool and vehicle upgrade system, feels a little light on content and all topping, no filling in the long run. If immersing yourself in sci-fi visions lifted straight out of the 1980s is your thing, however, then Pie in the Sky is has a few bite-sized tasty morsels for you to take away.

Verdict
Like Paperboy dressed in more socially acceptable clothes, Pie in the Sky: A Pizza Odyssey’s 80s-esque ode to pizza delivery features a surprisingly deft accelerometer based controls and an upgrade system designed to give this endless runner some depth. Sadly this was only successful in part, leaving dev Salty Croc Interactive’s latest a little light on filling.