I recall a few years ago reading an interview in which a distinguished historian claimed that the increasing popularity of digital cameras meant the end of photography as a pictorial record of history, because if people could delete photos then there would be nothing for future historians to study. This opinion was taken seriously at the time, but even then it was apparent to anyone who actually knew anything about digital cameras that it was utter rubbish. Rather than never saving any photos, most people will be surprised by how quickly very large collections of digital photos accumulate. In the days of film photography, you’d be limited to taking just 24 or 36 photos before having to change the film, but when you have a memory card in your camera that can hold several hundred high-quality images, there’s really no need to delete any but the worst shots. 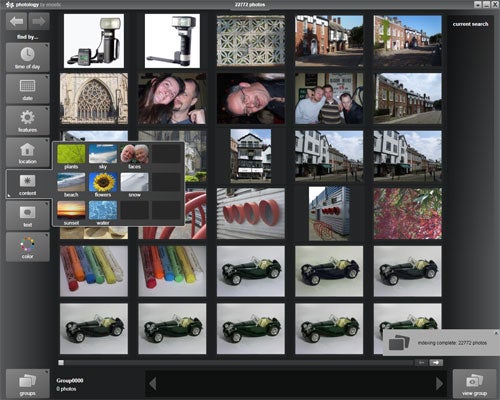 As result a simple day out with the kids can easily result in a 40-50 photos being downloaded to your computer’s hard drive, and a holiday can generate several hundred shots. Over the course of a year it’s very easy to accumulate a couple of thousand pictures this way, which leads to a bit of a problem in itself. Rather than not having enough pictures, most people find that they have too many, making it increasingly difficult to find any specific picture. If Aunt Ethel wants a print of that shot of Ernie wearing the red jumper, it can take you a lot of searching to find it. 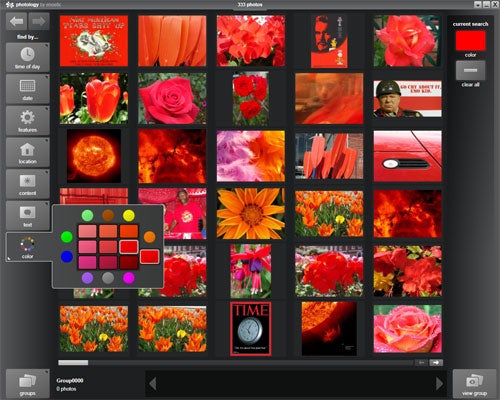 One solution is to keep all your photos in folders named by subject, another is to label them by date, but if you use a photo downloading program of the type supplied with many digital cameras, you may not have this option. Many download programs simply dump all the images from your camera into the default My Pictures folder on your C: drive, labelled only with a file number. After a few months you can end up with a huge mass of pictures and no easy way to search through them. Help may be at hand however, because Photology, a new program from American software company Enoetic, offers an easy way of searching your images without sorting or labelling.

The first time you run the program it starts searching through your computer’s hard drive, building an index of all the pictures it finds. It quickly analyses each picture using statistical and artificial intelligence algorithms, and builds a database which can be searched using filters. The process is surprisingly quick, and requires no user input. I have well over 20,000 photos on my hard drive, but Photology was able to index all of them in just a few hours. Each time the program is used after that, it quickly checks to see if any new photos have been added, and adds any that it finds to its index. 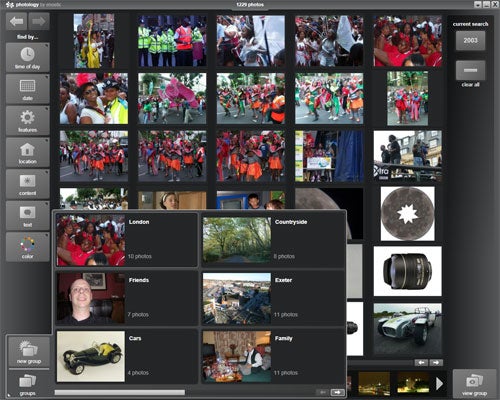 The user interface is extremely simple and attractively designed. A row of buttons down the left of the screen offer a number of search categories, including date by year and month, the rough time of day (morning, afternoon, evening and night), location (indoors or outdoors), features such as orientation, over or under exposure, degree of focus and monochrome, text from captions or descriptions, the presence of predominant colours, and most interestingly, content. The content search can recognise photos in a number of categories, including plants, faces, sky, beach, flowers, snow, sunset and water. Several filters can be applied at once, each one searching within the results of the previous one, so for example you can search for photos taken in July, during the afternoon, outdoors at the beach. Each filter progressively narrows the search down until you are left with just a handful of pictures that meet all of your criteria, so as long as you know a bit about the photo you are searching for it becomes a lot easier to find it. Because the program searches its own index rather than looking through all of your photos for every search, it is very quick, applying the search filters in just a couple of seconds. 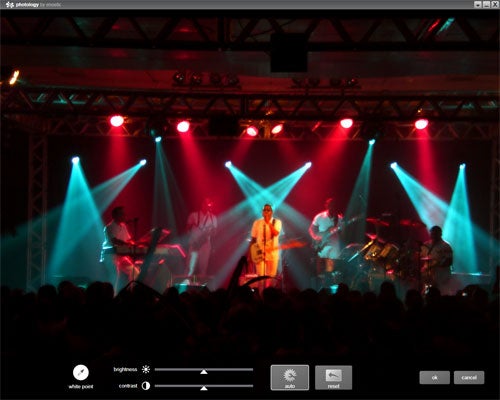 Once you’ve found the photo you were looking for, Photology also offers some very basic editing tools, including rotation, cropping and resizing, and adjustments for brightness and contrast. It also has a very simple one-click operation that allows you to organise your photos into named groups, but without moving the actual files into different folders, so the same image can be included in several different groups. This is a very good way of keeping photos organised, and makes finding related pictures much easier. Captions can be added to photos in the detail view, and double-clicking on an open image starts your default image viewer or editing program and opens the picture using that instead.

Photology is designed to be extremely easy to use, and even the most technophobic luddites will have no trouble with the interface. There are no complex menus, and everything the program can do can be accomplished with just a couple of mouse clicks. While this is undoubtedly an advantage for some people, more experienced users used to programs such as Adobe Photoshop or Corel Paint Shop Pro will find it very restrictive. Some degree of user control would have been a worthwhile addition, such as the ability to restrict searching to specific folders or drives, or the ability to create your own content filters. The editing functions especially are very over-simplified, and the brightness and contrast adjustments are very crude compared to similar features in the more capable image editing programs. I was also a bit concerned to find that one you’ve made adjustments to a picture, it is saved automatically as soon as you click OK, over-writing the original. It would be better to have the option to save the edited photo under a different name, so as to preserve the original image. Another feature I would have liked to see is the ability to select several pictures at once in the thumbnail view. As it is, adding a large number of photos to a group is very time consuming, since you have to add each one individually. 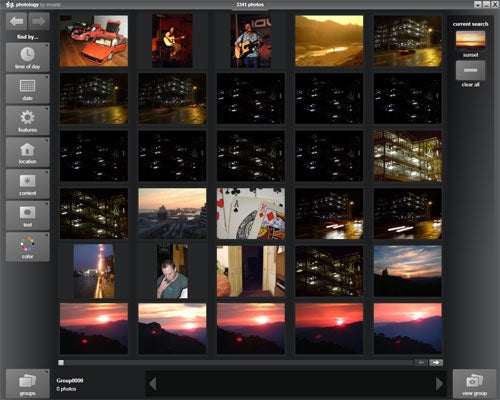 While the standard search filters for date, time and features were very accurate, it has to be said that the content search is not as effective as I had hoped. It seems to search for content based mainly on the distribution of colours within the image, so a search for flowers brings up any photo with brightly coloured objects in it, the search for sunsets brought up any photo with a combination of red and orange colours and a dark background, and the search for pictures of water turned up any photo with large areas of blue-green. The search for faces was more successful, as was the search for beaches, but even those returned a number of erroneous results. Judging by the spare spaces in the content search panel, I suspect that if the program is a success the new filters will be made available as add-ons at a later date, so I hope that it is also possible that the existing filters can be improved, because some of them need it. 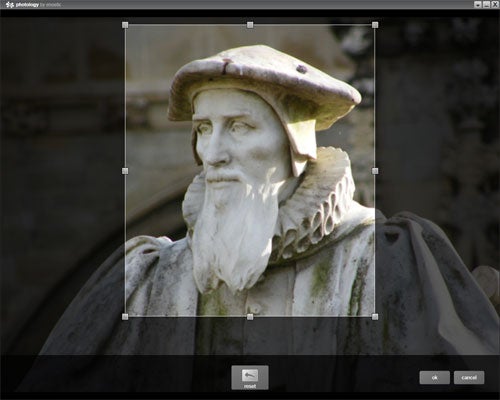 That said, as a program Photology does what it sets out to do; it provides a very easy to use search system which allows even the most technically inept users to quickly find pictures within a large collection, and then helps to keep them organised. It isn’t Photoshop, but then it isn’t supposed to be. For a start it is a lot cheaper. The program is available for download from Enoetic’s website, with a web-based trial version available for an instant demo. The full version of the program costs US$29, which thanks to the current state of the US economy is only about £15 in real money, and as such is very good value for money. As an added bonus, Enoetic has stated that 10 percent of the sale price of the program will be donated to charity, so even if you decide you don’t like the program you can feel good about buying it.

Photology offers a low-cost solution to a problem that plagues many keen camera users, that of searching for specific photos within a large and disorganised collection. It is extremely simple to use, and while it does have its limitations it is generally very fast and effective. If it is developed further and more filter modules are added in the future then it could become a very useful tool.