What is the Phonejoy Gamepad 2?

The Phonejoy Gamepad 2 is a pocket-sized controller that can be expanded to accommodate your smartphone, which it connects to via a Bluetooth link, turning your handset into something more akin to a dedicated portable games console. It has an internal rechargeable battery which lasts around 14 hours per charge, and is compatible with both Android and iOS devices. As the name suggests, this is an evolution of the earlier Phonejoy Gamepad. 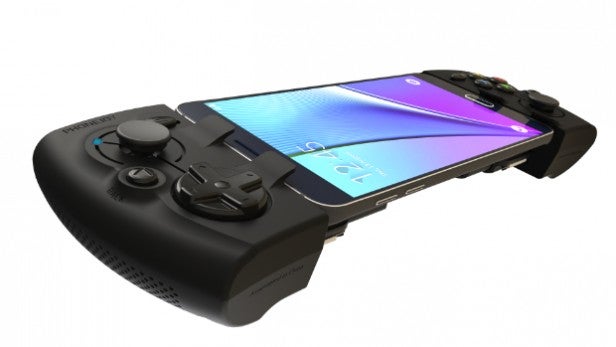 The Phonejoy 2 doesn’t differ all that much from its forerunner. In fact, to the untrained eye they look practically indistinguishable from one another. The design is the same, boasting a surprisingly ergonomic casing which is comfortable to use for prolonged periods. It employs the same expanding mechanism which allows you to insert your handset in the middle, happily accepting phones with screens of up to 6-inches in size. When your device is in situ the Phonejoy 2 clamps around it firmly thanks to its rubber grippers, removing any fears you might have that it could topple out during use.

Look more closely however and you’ll notice subtle but significant changes to the basic design. The face buttons feel more responsive this time around, avoiding the mushy feel the ones on the previous model exhibited. The dual analogue pads have also undergone a fairly dramatic revision; they’re now sticks which stand a little more proudly and feature a concave rather than convex surface.

They can also be “clicked” downwards like the sticks on the Xbox One and PS4 controllers, offering another input option. Although it’s impossible to tell just by looking at them, the L2 and R2 shoulder buttons now offer analogue input.

The analogue sticks are easily the biggest external change seen in the Phonejoy 2, and are a notable improvement over what has gone before. Because they’re raised from the casing they’re easier to use, and the only complaint we can level is that the disc on the top of the stick rotates when used, and this can sometimes lead to your finger slipping off the concave surface.

When you Phonejoy 2 isn’t cradling your phone it can be used in its retracted form as a standard Bluetooth gamepad, either with a micro console attached to your TV or on a tablet device. 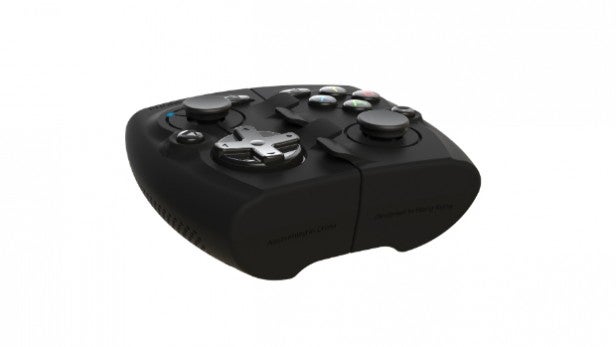 The new Phonejoy model makes use of Bluetooth 3.0, while the original model had 2.1. On paper that means faster response time, but to be honest we never had many complaints with the first device in this regard. Still, your own personal experience may vary, and it’s good to know that the controller has at least been updated to make use of such tech.

Linking the Phonejoy 2 to your Android phone is a breeze. You simply open up the Bluetooth menu, turn on the pad and pair the two up. The controller then acts as an input device and can be used to scroll through the Android UI. When you’re in a game it naturally allows you to control the action with proper buttons and sticks rather than on-screen controls, providing the game in question supports such input.

To take the pain out of tracking down games which offer Bluetooth pad support, the Phonejoy 2 has its own companion app which offers a curated storefront packed with compatible titles. Selecting one pushes you through to the Google Play store where you can make your purchase. It’s an elegant solution to what could have been a really frustrating problem – game developers rarely mention support for physical controls on their Google Play listings, and this app takes the uncertainty out of making a purchase.

If you’re an iOS user, then you can use the Phonejoy 2 in iCade mode, which allows the pad to replicate the performance of that particular range of popular accessories. 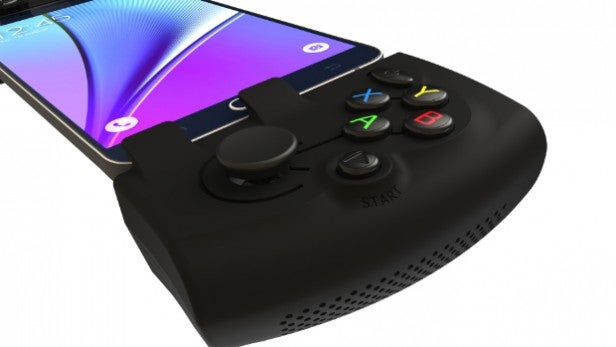 The original Phonejoy was hardly a slouch when it came to stamina, offering around 8 hours of play on a single charge. For most people that was more than enough, but the team behind the controller has clearly had some negative feedback as the second version provides almost twice that amount. 14 hours is the advertised figure and it’s no idle boast – our review unit was with us for almost an entire week before it needed topping up. A 90-minute charge returns it to active duty, and it can be recharged using a standard micro USB connection. There’s no way of accessing the battery however, so once it goes kaput, you’ll have to invest in an entirely new controller. 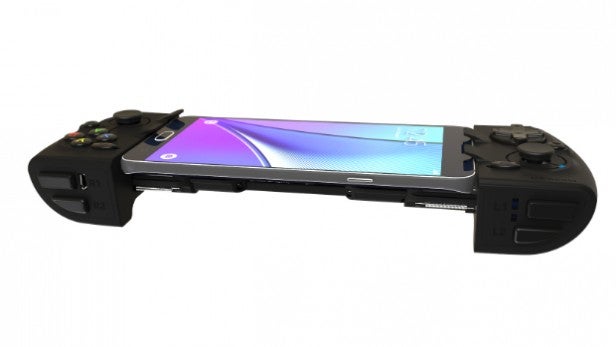 Should I buy the Phonejoy Gamepad 2?

If you’re serious about having physical gaming controls on your phone then the Phonejoy is probably the best option on the market right now. The design is great, it’s easy to set up and the improved battery life means you don’t have to worry about it running out of juice on long trips. It’s also reasonably-priced, with the basic bundle – which just contains the pad – selling for around £45. The Advanced and Pro bundles cost more, and add in additional accessories such as charging cables, kickstands and travel cases, but we’d recommend the base package.

The ideal interface for serious mobile gamers, Phonejoy 2 is an improvement on what was already an excellent gaming controller.