Reviewed on: Nintendo 3DS
It’s fair to say Phoenix Wright has had its share of ups and downs. Implementing new ideas for the sake of it that never really fit the game’s foundations, it lost sight of why it became so popular to begin with. Thankfully, Spirit Of Justice rights all of those wrongs.

Going back to what made it a fan favourite to begin with, the latest Phoenix Wright is exactly what you’d want. This means the majority of your time is either going to be spent investigating crime scenes by tapping your 3DS stylus on anything that looks remotely interesting, or heading to court to present evidence and protect your client.

Unlike recent entries, though, Spirit Of Justice is actually challenging. Gone are the days where trial and error was a poor substitute for using your brain. The fact that you’ll genuinely be tested here – and often stuck – is what makes it work so well. 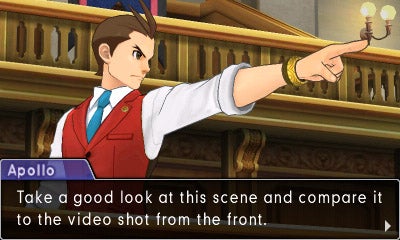 A large reason for this is the location you find yourself in. Throwing reality right out of the window and returning to more wacky ways, you’ll find yourself in Khura’in, an especially poor place to be, as it’s currently experiencing an internal uprising. It’s also completely stripped of a fair justice system due to lawyers sharing the same fare as their clients. That means if death is the punishment, both are in for the chop.

Of course, that’s not enough to stop one Pheonix Wright from following the path of truth. When his tour guide is accused of murder, the attorney jumps to his side, despite knowing his potential fate and that Rayfa – the hot-headed princess of Khura’in – is directly involved.

Spirit Of Justice constantly uses this as its base, but it still has plenty more to throw into the mix. Even with how bizarre things can be, Capcom still had no problem with going another step further and adding in the Divination Seance. Allowing the mentioned Rayfa to summon the memories of victims involved in the trial, it’s another avenue to both confuse, frustrate, but ultimately entertain as you seek a verdict of innocence. Not only do you have to prove the prosecution wrong, but you also have to provide reasonable doubt on a ghost that was involved in the killing. 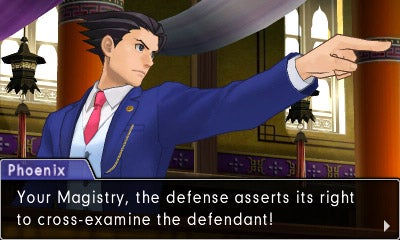 It all comes together wonderfully, however, asking you to use your wit and hard proof to win a case as opposed to just winging it and hoping for the best. That just won’t work. For all the bells and whistles Phoenix Wright has, its courtroom battles – when done right – are excellent, and Spirit Of Justice gets them spot on.

It certainly doesn’t hurt that a lot of old mechanics that were previously abandoned have been brought back, namely the ‘five attempts and you’re out’ system. That means – as much as you may like to – you can’t just take the same tack over and over again, hoping to find a flaw in the game. You’ll lose.

Such a punishment makes you accountable for your actions as well. While Phoenix Wright is surrounded by entertaining nonsense, there is a very real, and often gruesome, story tying things together. Toying with murder is always going to have some sort of dark edge, and Spirit Of Justice manages to balance that perfectly. Events have the right amount of weight so you can take them seriously but they never go too far in the wrong direction. You can always enjoy the other nonsense going on around you.

And there is a lot of nonsense. With an abundance of returning and new characters to give the story a real sense of personality, you’ll often be treated to some truly bizarre conversations which keep things interesting and open up new cases. They also directly affect your success, making them more than just enjoyable asides. Junior lawyer Apollo, for example, has a magical bracelet that can detect when someone is lying. You can’t overly rely on it, but knowing he serves a bigger purpose than just being screen fodder is very welcome. 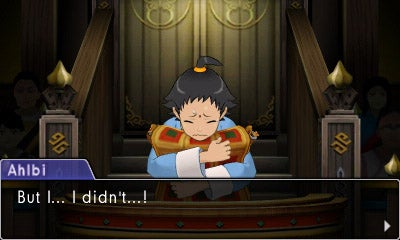 This cast is also responsible for some truly shocking plot twists along the way, another area Capcom has fine-tuned far better this time around. When you break Phoenix Wright down to its bare bones you are, mostly, looking at still images and standing in court. It needs the proper context to make what you’re doing feel important, and that’s apparent for a large portion of the game. Such surprises only add to that, changing your perspective on what’s happening and also, on occasion, giving you much needed insight into a specific lead. Every part feels important.

Unfortunately, Spirit Of Justice isn’t able to keep this up throughout. The majority of its cases are great and engrossing, but a couple prove to be the exact opposite. It almost feels as if they were developed by a different team, because every aspect of them struggles. Not only is what you’re investigating boring, but the jokes and puzzles are dull as well. It’s understandable that Capcom wants to ensure people don’t feel ripped off in terms of the game’s length, but these could have easily been cut, especially as they’re mandatory. It can become quite the slog.

Overall, though, Spirit Of Justice is Phoenix Wright done in a manner that it deserves. It’s easily the best iteration of the last few years, and proof that there’s no need to put it to bed just yet. The concept still works. The key is just building an interesting and compelling world around it. When that’s a success, there’s a lot of joy to be had.

A fine start for anyone who is yet to experience the series too, this is another top-drawer addition to the superb 3DS library. So, in short, it’s very good.

Phoenix Wright: Spirit Of Justice gets the balance between ridiculous and serious spot on and is the best game in the series for some time.