What is the Philips SW750M?

The SW750M is a wireless speaker that makes it easy to stream music from Spotify and play it in different rooms around the house. Using the Spotify smartphone app as a remote, you can stream tracks to a single speaker or play the same music on up to four speakers simultaneously – all through the magic of Spotify Connect.

There are two models in Philips’ Spotify speaker range, the SW750M and the smaller SW700M. At around £130 and £90 respectively, it’s a relatively affordable way of creating a multiroom system, but at these prices Philips faces stiff competition from the likes of Samsung, whose M3, M5 and M7 speakers were the first to support Spotify Connect (alongside DLNA and Bluetooth). 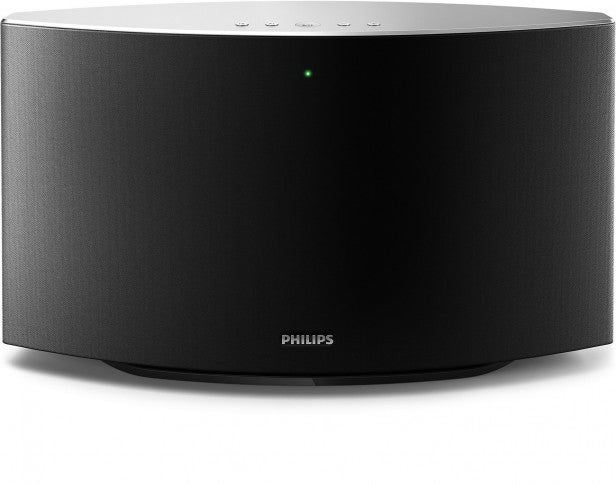 The front is covered in a black cloth grille with a small LED that denotes the unit’s status. The silver panel on top houses a row of buttons that lets you play/pause, adjust the volume and skip tracks. These buttons are a useful feature as they offer quick and easy control up close, without having to fiddle with the app. The unit stands on a plastic base that creates a small gap under the speaker. 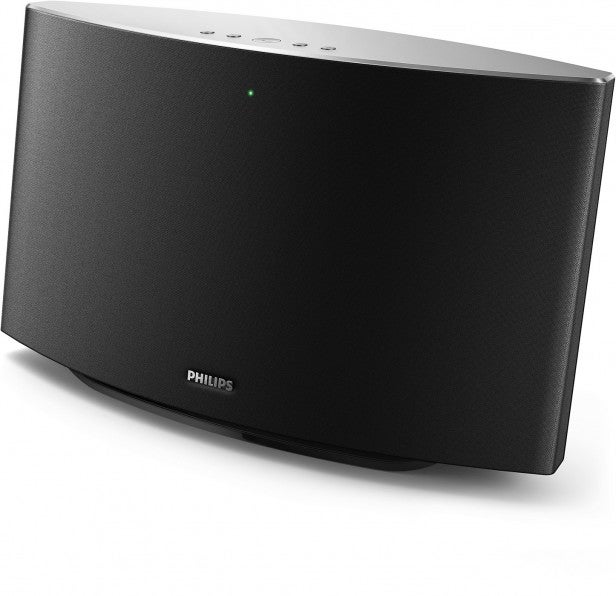 It looks snazzy, but the build quality betrays the budget price tag. It’s sturdily built, but the plasticky feel to the silver panels and back end take the shine off slightly.

On the back are two buttons marked WPS and Setup. WPS lets you connect to a compatible router quickly and easily, while the Setup key helps you link the speaker to a multiroom system without WPS.

Because it’s solely designed to stream Spotify, the SW750M offers no inputs and doesn’t support Bluetooth and DLNA. That’s fine if Spotify is the only way you listen to music, but if you want to temporarily hook up a non-Spotified phone or stream audio not found on Spotify you’re out of luck. If that’s what you’re after, Samsung’s M3 plays Spotify, Bluetooth and DLNA for the same price as the SW750M.

The SW750M uses two 3-inch full-range drivers and two 35mm tweeters, with two bass ports on the back that expand low-frequency output. Power output is quoted as 20W. The smaller SW700M only sports two 2.5-inch drivers. 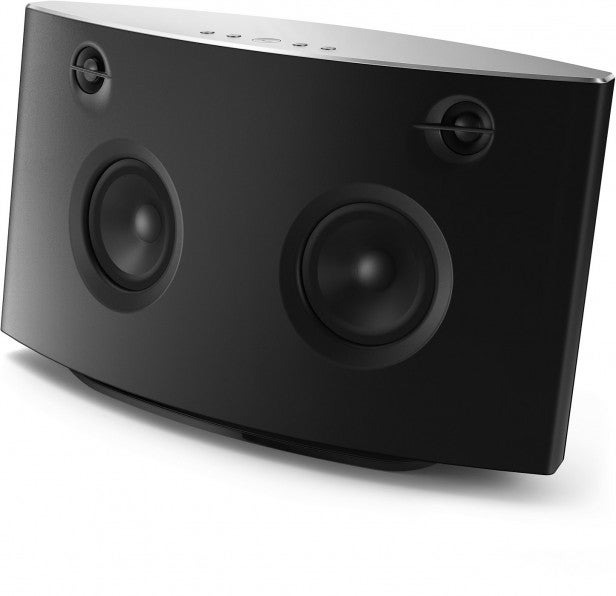 You can create a multiroom system containing up to four SW750Ms or SW700Ms. If you’re playing music on a speaker in one room and want to switch to another in a different room, just hit play on the desired speaker – the music stops playing on the old speaker and starts playing on the new one. You can also group speakers together and play the same music on all of them.

To set it up, you’ll first need to install Philips’ SpeakerSet app on your iOS or Android device, as well as the Spotify app if you haven’t already. You need a premium account to access Spotify Connect functionality.

Next you need to connect the SW750M to your Wi-Fi router, which is easy with WPS – just hit the WPS buttons on both units – but if not you have to connect using the SpeakerSet app, which is just a case of holding down the Setup button and following the onscreen instructions. 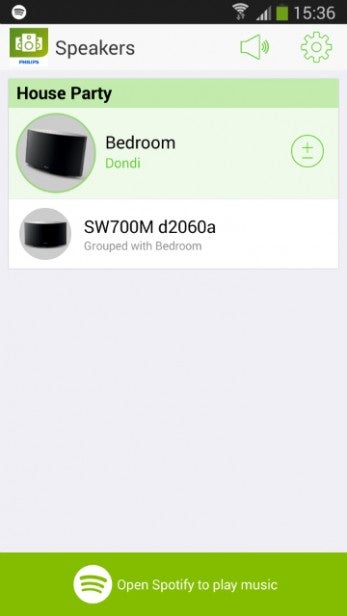 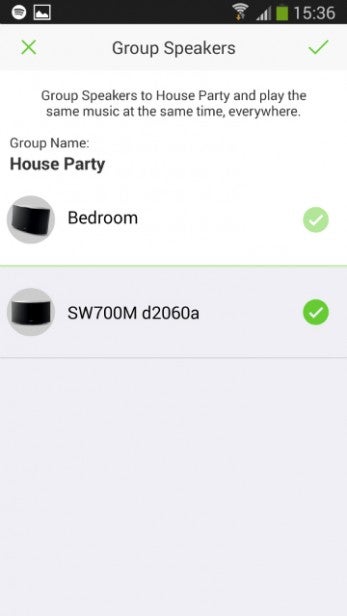 The SpeakerSet app is nicely designed with a clean, simple layout. The main menu lists the available speakers and shows the name of the track being played. Tap the ± sign next to one of the speakers to enter the House Party mode – thankfully nothing to do with Noel Edmonds – where you can group speakers together. At the top is a speaker icon that lets you adjust the volume for each individual speaker. 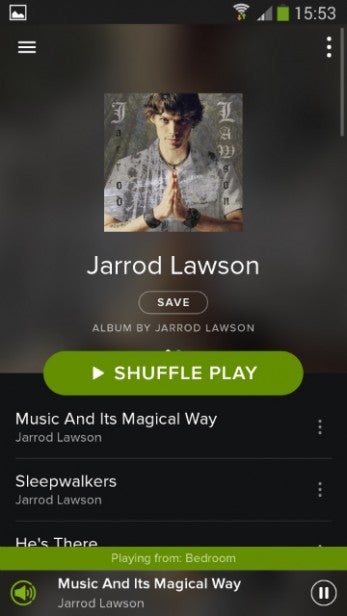 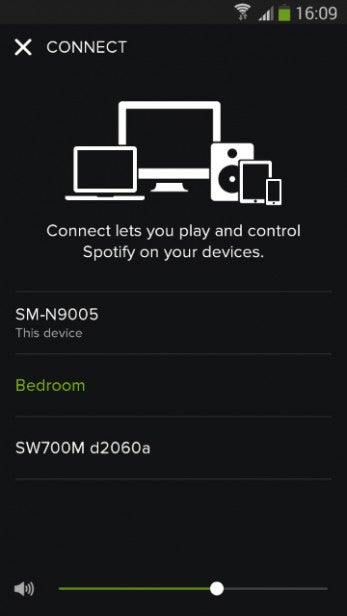 Once connected, fire up the Spotify app and hit the Connect icon to select which speaker(s) to play music through. We’re sure you’re familiar with the Spotify app but its remarkably slick operation and eye-catching interface make it a joy to use, and with over 30 million tracks at your fingertips it’s not hard to see why so many people are ditching digital formats in favour of streaming. You can control the volume by pressing the Connect icon and using the slider at the bottom.

We were sent one SW750M and one SW700M to play with, and after setting them up in a mini multiroom system the pair worked brilliantly together. The speaker switching works as promised – one press of the play button brings the music into the room – and we had no trouble orchestrating the whole thing on our Samsung Galaxy Note 3 smartphone.

In terms of sound quality the SW750M is a very impressive performer, delivering a full, punchy sound with deep bass notes. The sound it creates is much bigger and richer than the speaker’s modest dimensions would suggest, great news if you have a large living room to fill.

Uptempo dance music is conveyed with foot-tapping energy – basslines lock tightly to the driving drums with no lag, and there’s a crisp, incisive quality to the hats and percussion. Vocals sound natural – not nasal or tinny like some speakers at this price – and the overall the sound is tight and cohesive, with no particular group of frequencies dominating. A lack of finesse and subtlety in the highest frequencies is the only real indication of the speaker’s budget price tag.

You can turn up the volume fairly high before you get any cabinet rattle or distortion, which allays our earlier fears over the plasticky construction, and at quiet volumes the sound’s natural dynamism allows you to hear the core elements of the music.

The SW700M offers a smaller, more lightweight sound, lacking the punch and bass depth of its big brother, but overall its sound is still very enjoyable. It more than passes muster as a secondary speaker in the bedroom. 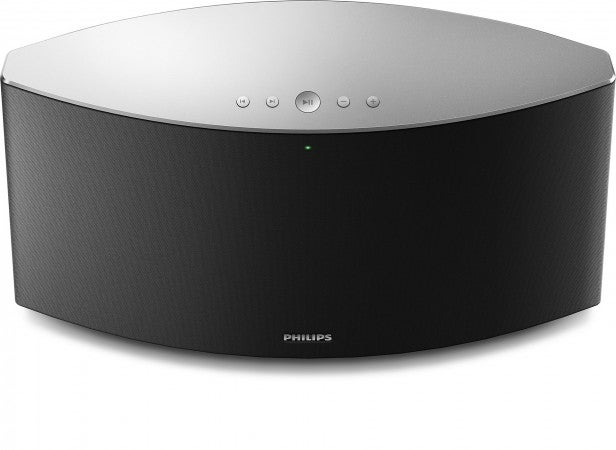 Should I buy the Philips SW750M?

If you’re a Spotify devotee who doesn’t listen to music from any other source, the SW750M will be worth every penny. As promised, it’s remarkably easy to play tracks from Spotify’s extensive library and beam them to other speakers around the house.

Playing tunes via the Spotify app is a slick, uncomplicated experience and the unit’s audio performance is superb for the money, offering a rich, well-integrated sound with punchy bass and crisp treble. It’s also stylish and easy to install thanks to Philips’ foolproof app.

However, there’s no provision for playing music from other sources, which is a pity when spending this sort of money on a sound system. If that’s a problem, you’re better off buying Samsung’s similarly-priced M3 WAM350, which backs up Spotify Connect with Bluetooth and DLNA – ideal if you’re into stuff not found on Spotify.

With terrific sound quality and a snazzy design, the SW750M is a fantastic speaker for Spotify devotees, but its lack of DLNA or Bluetooth makes Samsung’s M3 much better value for money