Wi-Fi is useful for all manner of things around the house: you can transfer files and share an Internet connection between multiple PCs. You can even stream media – store your music and video in one central location and play it on a device in a completely different place – something that’s especially useful now that most of us have our music and video collections ripped and stored on a PC or laptop hard disk.

And there’s a multitude of products on the market aimed at letting you do exactly that, from do-it-all media streaming boxes that let you watch HD video and view pictures on your telly as well as play music through your hi-fi, to specialist systems for audio only. My current favourite has to be Logitech’s superb Squeezebox Duet system, with its simple, yet powerful operation, and beautifully well-thought out design. But it has a drawback – you have to already own a decent stereo system to make it worth your while investing. If you don’t, buying everything at once can get a little expensive: the Squeezebox system costs £279, and that’s for just one player and the remote. 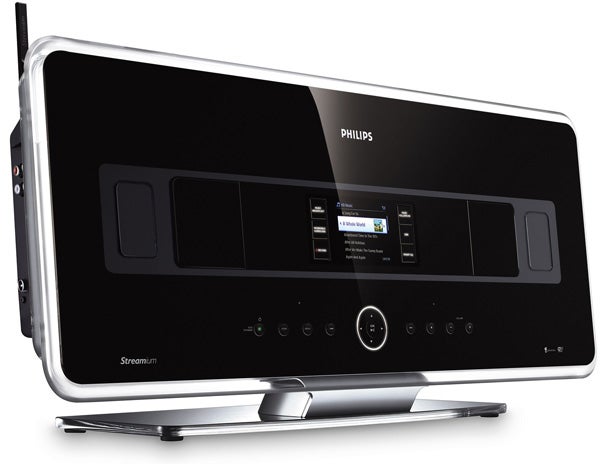 If wireless music sounds a good idea, but you don’t like the mix and match approach – or the potentially spiralling cost – Philips’ new WACS7500 (follow up to the WACS7000 I reviewed) could have the answer. It’s a wireless music system, but one you don’t have to own a hi-fi, or even a PC to run successfully – everything is completely self-contained. And it’s not just a starter kit either. For £700 you get a two-box system: one Centre – a big beefy hi-fi unit which represents the business end of the set-up – and one Station – a smaller and less fully-featured device. Both have built in flat panel speakers, subwoofers and amplifiers and both look pretty swanky, dressed in glossy black with sculpted Perspex trim and cool white lights.


The essential premise is simple. The Centre has an 80GB hard disk on board to which you can rip CDs using its top-mounted slot-loading CD player, complete with track names, artist names and even album art picked up using a preinstalled Gracenote database. You simply load a disc, hit record, and the disc will rip at 4x speed, or you can rip while playing. These ripped CDs can then be played back in HD mode on the centre itself – and you can browse in the normal way once this is done, via artist, album, genre and so on – or you can stream them to the station.

The WACS7500 is also easy to set up – an essential feature for a system aimed at wireless music novices. All you do is simply sit the two boxes next to each other and turn them on in sequence. Once they know about each other you can then place the satellite in the kitchen, for example, while leaving the Centre in the living room. A wall mounting kit for each box adds flexibility, and a further four Stations can be added to the system at a cost of £200 so you can expand into the bedroom or study should you want to. 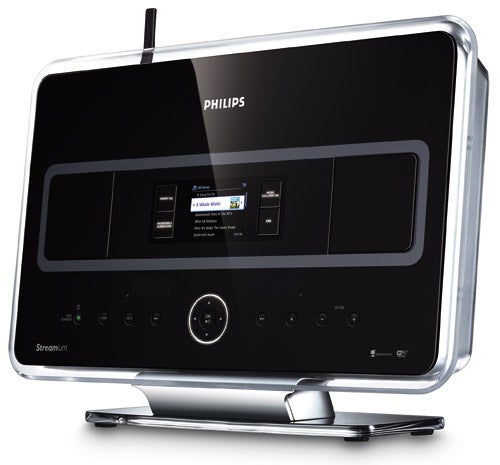 It’s a pretty straightforward system to use too and, importantly, the remote control, which can be used with both boxes, has its own monochrome screen that replicates the small 2in screen on the Centre. This can be used to browse tracks without having to get up and go over to the Centre in order to see the tiny screen.


Apart from plain Centre to Station streaming, there are plenty of other funky features to take advantage of once you’re all set up. Each of the boxes has an FM tuner, complete with flexible aerial and a USB socket for playing back from external storage and MP3 players that run in mass storage mode. There’s an Ethernet socket on each for wired connections, plus a socket for connecting an iPod dock.

More exciting than this, however, is the fact that the WACS7500 (like the WACS7000) has the ability to stream from UPnP network servers, meaning you can play back tracks shared via Windows Media Player on a networked PC or laptop if you want. Each box will also allow you to receive Internet radio.


There’s clearly an awful lot packed into this system, but the WACS7500 does have weaknesses. Sound quality should have improved over the previous system – there are now mid ”and” ‘tweeter’ flat panel speakers adorning the front of the Centre instead of just one panel for each channel, plus a single downward-firing sub instead of stereo sideways firing ports. I can’t confirm it’s a significant improvement as I didn’t have a WACS7000 to compare with, but there is plenty of clarity and balance on offer here. Its 20W per channel amp and 40W sub means it can go pretty loud, too, but I wasn’t smitten by the bass: it still isn’t that impressive, with a boomy quality and a lack of punch.

The Station’s 15W amp and slightly inferior single flat panel set up is not, understandably, of the same quality as the Centre, but that’s not necessarily a major issue. Rather than acting as your main music system, this box is more likely to sit in a kitchen or bedroom and it’s much better suited to this environment than the Centre is to a living room – like the Centre, it can communicate music in an unfussed and unforced way that’s perfect for background listening, though again bass isn’t a forté.

The weaknesses aren’t restricted to sound quality, though. For instance, you can browse the music library, but you can’t queue tracks up while you’re listening, so they’ll play automatically when the current track finishes. This is something that the Squeezebox Duet and the Sonos Digital Music system implement brilliantly. Ripping is slow too: the Centre system reads discs at a sluggish 4x speed and, as a result, CDs take anything up to 20 minutes to finish. Plus, while you’re ripping you can’t do anything with the system – not even listen to FM radio.

There are some annoying peculiarities, too, such as only being able to access certain settings (network settings, Internet radio registration and track information editing) using the basic, one-way infrared remote rather than the easier to use two-way one. The fact that the main playback controls on the Centre and Station aren’t backlit is also a pain: you have to really look hard to figure out which one does what if the lights are dimmed. And it’s mildly disappointing that there’s no AM or DAB radio.


Despite the weaknesses, I still think that the WACS7500 represents decent value for money. £700 essentially buys you not one music system, but two self-contained wireless hi-fi systems, each one capable of doing a decent job of streaming and playing music back in its own right.


Sound quality isn’t magnificent though – if that’s important to you, you’re better off basing a system around the Squeezebox Duet or buying a complete Sonos music system – but it’s perfectly acceptable for an all-in-one. Crucially, the WACS7500 offers a simple, stylish and elegant way of storing and streaming music at home. And it does that job pretty well.