Multi-room music systems were once mocked among hi-fi afficionados as expensive toys for those with more money than sense. But today, they are no longer the preserve of the mansion-owning, off-shore-banking elite.


While it’s fair to say you probably won’t be listening to your favourite tunes while sweating it out in the sauna or sunning yourself by the pool, the affordability of modern wireless networking kit means you can set up a system for listening in two or three rooms if you have just a few hundred quid to spare. And with the market maturing all the time, there is an increasing number of companies getting in on the act. 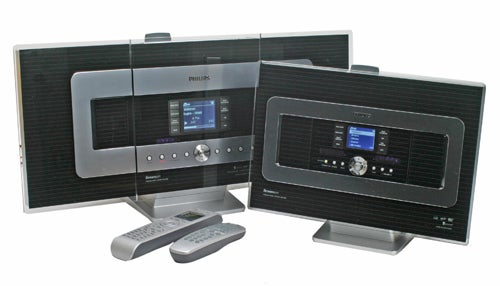 One company that’s been in the wireless audio business from the very beginning is Philips, with its Streamium range of products. We reviewed its wireless-music-system-in-a-box – the Streamium WACS700/05 – over a year ago now and it has now been given an update.


On the face of it, the new WACS7000 doesn’t look like much of an upgrade. The system still comes in the form of two units – one large base station and another smaller satellite box. They’re both done out in the same smart silver and black livery as before. Both have a small, 2.9in monochrome LCD screen mounted in the centre with an array of buttons flanking the screen and the main volume and navigation controls running along the bottom. And each has a pair of built-in flat panel speakers complemented by a small subwoofer. 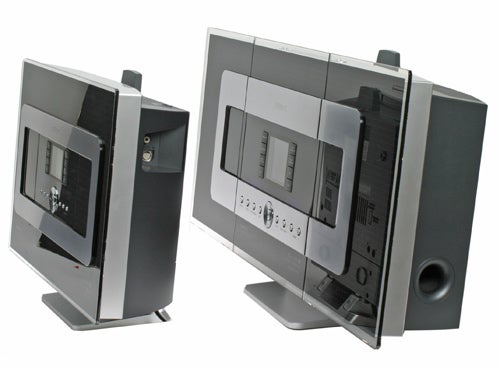 The greatest advantage the original has over rival systems is that you could run it without a PC if you wanted, with none of the faffing about with networks and security. And there’s no change to that here either. Plug both in, switch them on, and in a matter of minutes you’ll be enjoying wireless multi-room music.


The base station has its own 80GB hard disk and a CD drive too, which can be used to rip discs at bitrates of up to 320kbits/sec. Track names are looked up on the preloaded Gracenote database so there’s no need at all to involve a PC at any stage of the proceedings if you don’t want, or just can’t face, the complication.

This is where the improvements come in. That hard drive is bigger than before, and the encoding rate is also up on the maximum the WACS700 was capable of too. More significantly, wireless music streaming has now been added. With the first system you were limited to ripping discs to the base station’s hard disk. So if you’d already ripped a few thousand tracks to your PC, you then had to copy the whole lot across to the base station’s hard disk with the bundled Ethernet cable in order to listen to them. Either that or rip everything again, disc by disc. 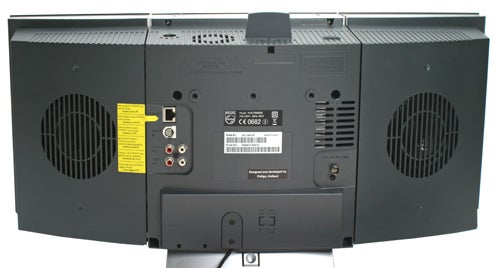 Of course you can still do this with the WACS7000 if you want, but far better to use the new UPnP functionality, which is built into both satellite and base station units. This allows you to stream music from any UPnP compatible server software or NAS box on your network. Install something like TwonkyMedia on the serving laptop or desktop and you can even use the system to tune into internet radio. And the new functionality means you can even access the base station’s hard disk from any other UPnP-enabled hardware on your network, so you don’t necessarily need to stick to Philips hardware should you want to expand into another room at a later date.


Also among the improvements is a USB slot on the top of each player, which enables you to plug in a thumb drive or your iPod, browse, play and copy tracks to and from the base station’s hard disk, with a dedicated iPod cradle available as an optional extra. Sound quality is said to have been improved too, and while we weren’t able to compare the sound quality directly with the original WACS700/05 and verify these claims, it’s certainly highly acceptable. The flat panel speakers capture a surprising amount of detail and the subwoofer built into each unit does a good job of fleshing out the bass notes. Both boxes go pretty loud as well.

It does sounds a bit on the boomy side if you crank up something that’s heavy on the bass – a bit of Jamiroquai, for example, or Niti Sawhney – but at mid-volume levels the sound is surprisingly agile. The smaller satellite unit is especially impressive, given that it retails for around £200 as a standalone unit.


Unfortunately, there’s still plenty that Philips could and should have changed and didn’t this time around. The music browsing system, for example – a weakness of the original – has, disappointingly, been left largely alone.

A search facility has been added, but the menu system is still sluggish and unresponsive, meaning browsing can be an extremely frustrating experience. And, there’s no simple way of queuing up tracks as you’re listening. You have to go through the long-winded process of creating a playlist and adding a track to it before you can start to queue up tracks – the feature isn’t available while streaming music using UPnP either. It’s a pretty basic feature that surely wouldn’t have cost Philips much in software development time to implement properly.


And while we’re talking about the negatives, it’s also worth highlighting the file format support, which is limited. You’ll be able to play WMA and MP3 files (including VBR MP3s) – we’d be surprised if you couldn’t – but there’s no support for DRM protected WMA files, WMA Pro, Apple music files (AAC), OGG Vorbis or any of the lossless audio codecs that have been gaining in popularity in recent years, as the price of storage has fallen.

Whether or not the Philips WACS7000 can be considered a successful upgrade, or even worth buying at all, really depends on your needs. On the one hand it looks dated next to systems such as the Squeezebox 3 and Sonos wireless music systems. File format support is thin and the firmware is frustratingly basic and slow.


On the other hand, it offers quite a lot for your money. Although £528 may sound expensive, it does get you two wireless music streaming players with speakers and amplifiers thrown in, plus the facility for ripping CDs in your living room without having to cart your CDs to the PC every time you want to listen to something new. 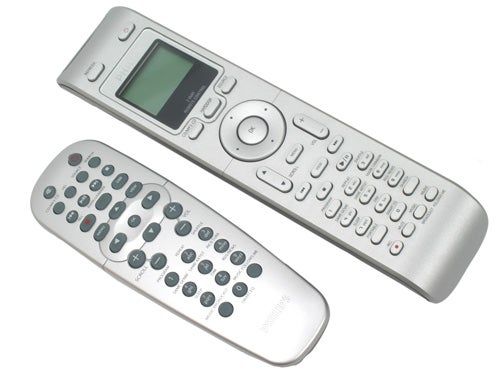 Compare this with a couple of Squeezebox 3s – which will cost around £400 and don’t come with and amp or speakers built in, hard disk capacity or a ripping facility – and it’s starting to look more reasonable.


The WACS7000 won’t do for anyone wanting to add wireless music streaming to a current system. It’s not a patch on the Squeezebox for ease of use, features or file support. But if what you’re after is a one-box system for a couple of rooms such as the kitchen or conservatory, its simplicity and all-in-one nature makes it well worth a look.