Philips is no stranger to network-connected media streaming. It’s Streamium range of such products stretches from the likes of the streamium MCi500H Hi-Fi system to the Streamium NP1100, which takes care of the streaming part, but relies on a separate set of speakers to be of any use. The Streamium NP2900 sits in the middle of the line-up. With its built-in speakers it’s a capable stand-alone device, but it’s hardly a replacement for a full Hi-Fi system. 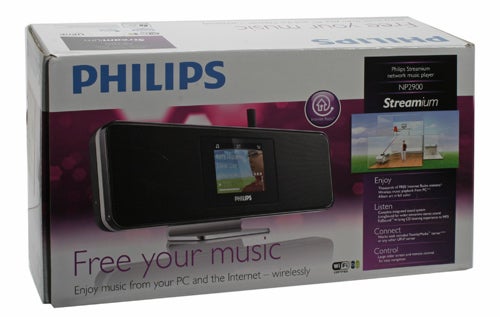 The number of these secondary media streaming, Internet radio-accessing systems is growing so Philips has a fair amount of competition at the moment, most obviously from the Monitor Audio AirStream10 and Logitech Squeezebox Boom. Like both of those systems, the NP2900 will connect to Internet radio stations, pull multimedia off any network storage device or PC that supports uPnP (either over Ethernet or Wi-Fi) and can be used as a set of speakers for any device you want to connect. Unlike the AirStream10 the NP2900 doesn’t double as an FM or DAB radio, but with thousands of ‘net-based stations at your disposal, it’s not a serious omission.


The NP2900 certainly makes a good first impression. While its design is fairly conventional compared to the AirStream10, it is still attractive and, of course, puts its 4in, 320 x 240 pixel colour screen centre stage. The stand can be unscrewed and replaced with a wall mounting alternative if you prefer. 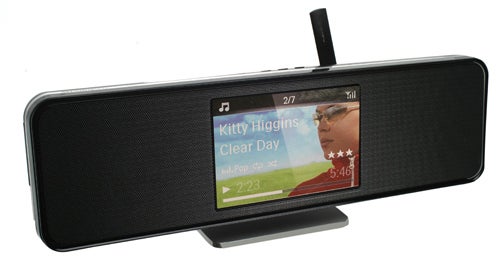 The NP2900 has four speakers, two pointing forwards at the front, where you’d normally expect them to be with another two at a 45 degree angle at opposite ends on the device’s rear. While this does mean you’ll need to place the NP2900 in front of a wall to get the best out of them, the improved soundstage Philips claims from doing so should be more than sufficient compensation.


Also at the rear you’ll find all of the NP2900’s inputs. These comprise an Ethernet port, two phono inputs (a single 3.5mm input would have been more practical to my mind) and a power jack. A 3.5mm headphone output isn’t exactly noteworthy, but a digital coaxial connector is as it makes it possible to connect the NP2900 to a more comprehensive external sound system if the inbuilt speakers aren’t good enough for you. Above these connectors is an articulated Wi-Fi antenna, the external placement of which might arguably help reception, although no device with an internal one has ever had problems in my experience. 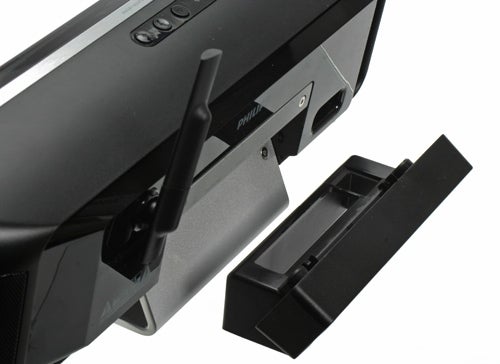 Controls on the NP2900 itself are limited to a standby, mute and volume up and down buttons. The bundled remote, though, is thoroughly comprehensive with dedicated buttons for switching between sources, entering the settings menu and returning to the ‘now playing’ screen to name but a few. There’s also a set of mobile phone-style alphanumeric keys for searching for specific tracks or Internet radio stations and entering Wi-Fi passwords.

Controls on the NP2900 itself are limited to a standby, mute and volume up and down buttons. The bundled remote, though, is thoroughly comprehensive with dedicated buttons for switching between sources, entering the settings menu and returning to the ‘now playing’ screen to name but a few. There’s also a set of mobile phone-style alphanumeric keys for searching for specific tracks or Internet radio stations and entering Wi-Fi passwords.


With the NP2900 primarily designed with music playback in mind it’s hardly surprising that format support is good. 320kbps MP3 and AAC files are supported, though WMA bit rates above 192kbps are not. Besting the AirStream10, the NP2900 will also play Ogg and FLAC files with nary a quibble and thanks to its colour screen will display album art, if available, as well as any JPEG file you care to point it at.

Setting up the NP2900 is a breeze. When first plugged in and powered on there’s a (skippable) demo of the device’s features after which you’re asked to register the device, select a time zone, whether you want to connect to a network and if so what type – if you’re connecting to Wi-Fi and your router supports WPS-PBC you’ll be saved the hassle of having to enter any Wi-Fi password yourself. And that’s it.


Once connected to a network you’ll probably want to check whether any firmware updates are available before changing any other settings as the system reverts to its defaults after updating, which is slightly annoying. Also annoying is the click sound whenever you do anything on the NP2900, so you’ll likely want to turn that off too. If, for some reason, you don’t want the clock to update itself via the ‘net you’ll want to turn that default off too.

The other three settings to play with are fairly subjective in their appeal. The NP2900 has, what Philips likes to call, three sound enhancement modes (four if you include the equalizer) with a dedicated button on the remote for toggling between each. Dynamic Bass Boost (DBB) has the easiest result to describe, providing a stronger bias towards the low end. For the most part this doesn’t really have any negative impact, although purists will probably want to leave it disabled. 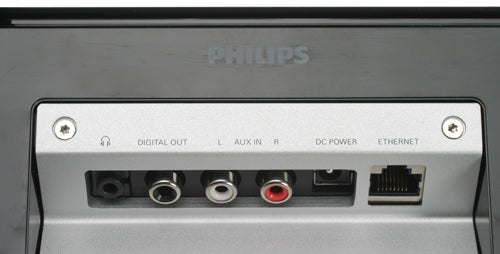 LivingSound aims to deliver a wider, fuller soundstage that the relatively close placement of the NP2900’s speakers might otherwise provide, facilitated by those angled rear speakers. The result is not entirely without compromise with the widened soundstage reducing the level of refinement. If you want to fill an entire room then it’s a worthwhile trade-off and certainly works as advertised, but if you’re able to sit in the LivingSound-less ‘sweet spot’ then you won’t want to enable the effect.


FullSound purports to restore the detail lost in compressed music formats so you’ll definitely want it turned off if you’re listening to FLAC files. I’m not entirely sure that the ‘restoration’ is always beneficial, though, and there’s nothing wrong with how MP3 or AAC files sound with FullSound turned off anyway, so it’s perhaps best left disabled permanently.

It’s something of a testament to the NP2900 that sound enhancement effects aren’t needed. The sound produced is notably better than that of the AirStream10 – which you’d hope to be the case given the extra speakers – and a commendable match for the Squeezebox Boom. Sticking on the plus side, that holds true no matter what you throw at the NP2900 – whether that be The All-American Rejects, the London Philharmonic Orchestra, or the X-ecutioners. 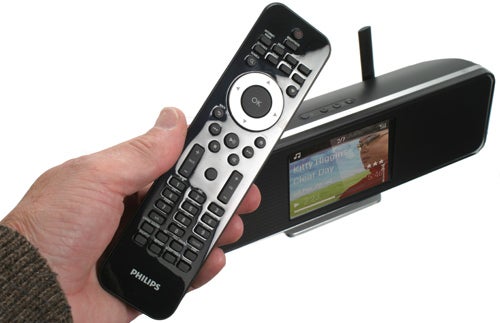 There’s an impressive level of clarity to the acoustic brilliance of Mona Lisa from The All-American Reject’s ”When The World Comes Down”, also highlighted in the vocals of The Pierce’s Catherine and Allison Pierce in Another Heart Calls from that same album. There’s no lack of punch in heavier tracks such as Real World though.


Venturing into the slightly more complex realms of Muse’s latest opus, ”The Resistance”, and the beautifully complex Exogenesis – all three movements of it (calling them tracks is something of a disservice) – I was impressed with how well the NP2900 coped. The narrow soundstage doesn’t quite do Matt Bellamy’s work justice, and on this piece in particular turning on LivingSound did more harm than good so there was no assistance to be had there. Nonetheless, for such a relatively small system the reproduction was still commendable. The less musically adventurous, but still utterly listenable, Unnatural Selection fared much better, with plenty of presence and a less ‘muddy’ sound than the AirStream10 which, in fact, the NP2900 bested with every track I could think of throwing at the two systems. 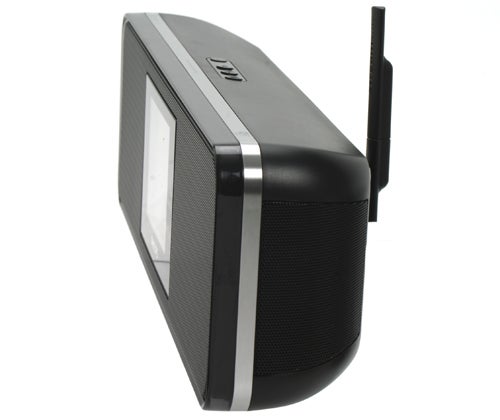 Considering the two are priced within a hair’s breadth of each other the choice between the two pretty much hangs on whether FM and DAB radio are at all important to you. Or, I suppose, if you are particularly enamoured with the AirStream10’s arguably superior styling.


The NP2900 can’t best the Squeezebox Boom in the performance stakes, but it doesn’t lag too far behind either. As a result, the choice between the two is pretty academic – I do think the NP2900 looks better, though. 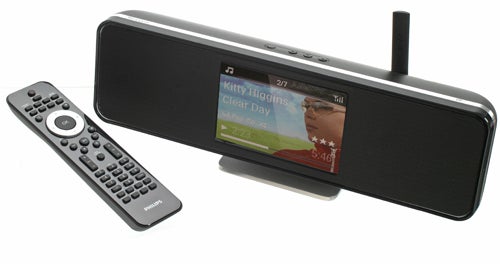 
The Philips Streamium NP2900 might not stand out particularly, but luckily its performance means it doesn’t need to. Adding a radio tuner to the mix wouldn’t have done the system any harm, but the omission shouldn’t be considered a death knell by any means.