For close to a year Shure has pretty much dominated the market when it comes to in-ear headphones. From the low-priced SE110’s and SE210’s, through the SE310’s and brilliant dual driver SE420’s, to the top-of-the-range triple driver E500PTH’s (now available as the SE530s) whatever your budget, Shure has an earphone to suit it. And, more importantly, it was almost universally accepted that the Shure option was the one to go for. 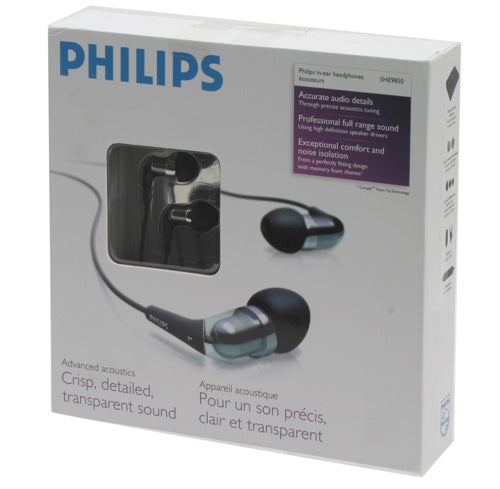 However, recently, the Shure party gate has been crashed by a relative newcomer called Klipsch. Both the Images and the Custom-3’s offer stiff competition to the SE420’s, and fundamentally, they hit the streets at prices it has taken the Shures over a year to fall to.


Now Philips is also throwing a new offering into the ring to fight it out with Shure, in the form of its SHE9850’s that I’m reviewing today. The last pair of Philips in-ear headphones we looked at were the noise cancelling SHN7500’s and we weren’t exactly enthralled, deciding that we preferred the Shure SE210’s. We did, in fact, suggest that if Philips could get similar drivers into a decently-priced package then it could have a winner on its hands.


However, with the SHE9850’s, our suggestion seems to have been heeded. In a nutshell they come in at a price that rivals the £65-odd SE210’s and should, by also using a single driver, offer audio quality that is at least comparable to the three Shure models below the SE420’s. And that’s not all. Philips’ engineers have apparently worked some extra magic on its driver technology, which they claim improves sound reproduction. As ever, though, we’ll be the judges of that.

Right out of the packaging, Philips has created a bundle that you wouldn’t be disappointed to see with a pair of earphones costing three or four times the price. Unlike Shure’s or Klipsch’s simple zipped cases, Philips goes a step further by offering a solid-feeling metal case with a slide-out tray into which you clip the earphones and wrap the cable around in a similar fashion to the Sleek Audio SA6’s. There’s even space for a second set of tips and an ear-wax remover, which will likely prove necessary for most owners. 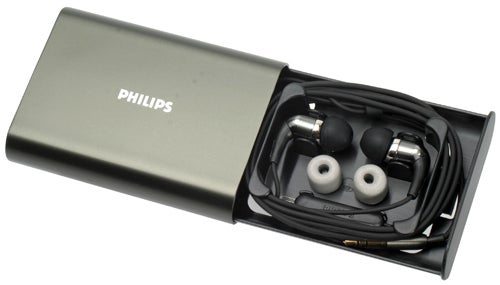 The earphones themselves look absolutely fantastic. The drivers are contained in a metal housing that sits in a clear plastic outer surround. The effect of this is twofold: first, aesthetically, it’s a fantastic look on par with, if not exceeding, that of the Klipsch Images. If you believe Philips this design also adds an extra layer of isolation between the driver and the outside world helping reduce vibration that could distort the earphones’ sound output.


Certainly the SHE9850’s do a fine job in minimising cable noise, that annoying ‘thudding’ sound made by the earphones’ cable hitting against you when moving. This is further helped by the inclusion of a clip that holds the cable against, say, a lapel or collar. 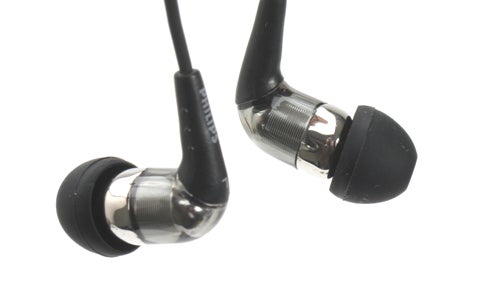 External noise isolation comes courtesy of a variety of tips for the SHE9850’s. In addition to three different sized silicone fittings, Philips has followed Shure’s lead and included a set of foam tips too. Comprised of two short cylinders of memory foam these are used in the usual squash, put in your ear, wait a few seconds for them to expand, manner. Unlike the foam Shure uses, however, Philips’ is much softer on the inner ear and once inserted you really can forget you’re wearing the SHE9850’s – a result of this highly comfortably fit and the earphones’ overall lightness.


It may seem like I’m harping on about the design a bit much, but it really is that notable. Small things add up to an overall satisfyingly complete whole, such as using metal sheathes for the 3.5mm jack, the robust join where the ‘Y’ of the cables branches to each ear, and the addition of three raised dots on the left earphone to distinguish it from the right one by touch alone. Ok, so differentiating left from right is possible with Shure’s earphones too, due to their over-the-ear, angled design, but with these earphones it’s an intention, not a by-product, of the design.

As well as looking fantastic the Philips SHE9850’s also sound very good. Both Riyad and I were amazed with their performance and agreed that they really are a testament to just what is possible with a single driver. Of course that’s a verse Shure has been preaching for over a year with the now £110 SE310’s, so let’s compare the two. 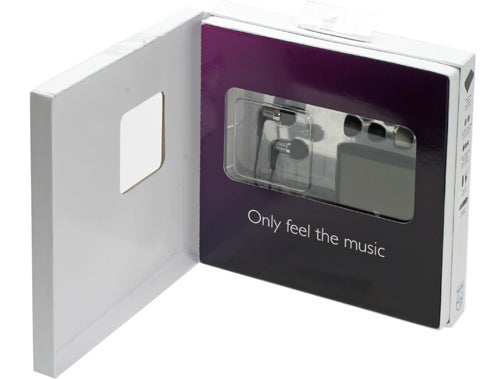 A play through Muse’s ”Dead Star/In Your World EP” (their best work if you ask me) was a real pleasure, with excellent high-end and mid-range clarity, coupled with a controlled level of refined bass. That said, the SE310’s picked out a little more detail from the Apple Lossless files I was feeding them, but then the SHE9850’s produced a fuller, more rounded rendition.


Turning to My Chemical Romance’s ”The Black Parade” the story was the same. The SE310’s, again, offered a more accurate reproduction, making the intense guitar riffs more penetrative while also singling out the vocals on tracks such as ”This Is How I Disappear”. However, the SHE9850’s redeemed themselves once more by balancing slightly less (comparative) precision with an overall larger soundstage and, to me at least, that gave a better sense of depth and immersion in the tracks. 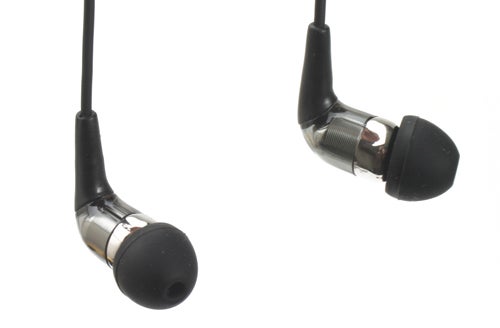 Out of curiosity, I also compared the single driver SHE9850’s to a pair of SE420’s and it was clear that the dual-driver solution was better, but the difference was nowhere near as profound as I expected. It’s probably also worth noting that with my iPhone set to the same output volume, the SHE9850’s were decidedly louder (have a lower impedance) than the Shure SE310’s. That’s by no means a deciding factor for many, but if your MP3 player suffers from a low-power output it might just swing things in Philips’ favour.


As Riyad observed when he compared the Shure SE420’s and the Klipsch Custom-3’s, if you leave pricing out of the equation then the choice is all about how you prefer to listen to your music. Shure, with the SE310’s, has the edge when it comes to absolute clarity while Philips presents a less technically accurate but at the same time warmer sound. If I had to make a call, though, I’d opt for the Philips SHE9850’s. Factor in the £40 price difference, arguably better design and package and it’s a clear win for Philips.