While we need to see its price before we can be certain, the PUS7304 is shaping up to be a superior mid-range TV in a market where quality options are getting harder to find

Philips PUS7304 Hands on: The superstar of mid-range TVs?

These days, most TV brands seem almost ashamed of their mid-range TVs. They don’t promote them, and they hardly ever send them out for review.

This is bizarre, given that it’s precisely these sorts of models that many discerning consumers are likely to end up buying. So it’s great to see Philips talking up one of its upcoming mid-range series, so much so that the company is calling it “The One”.

By which Philips means a series of TVs that it believes hits some kind of sweet spot between price, features and performance.

Unfortunately, we can’t yet judge how accurate or optimistic this lionising of the 4K PUS7304 range might be, since Philips has yet to confirm prices of its 2019 TVs.

However, we do applaud the mid-range promoting sentiment. Plus, we’ve had the chance to get some early impressions of The One’s mostly impressive design and capabilities.

Related: Philips “The One” is a TV for everyone 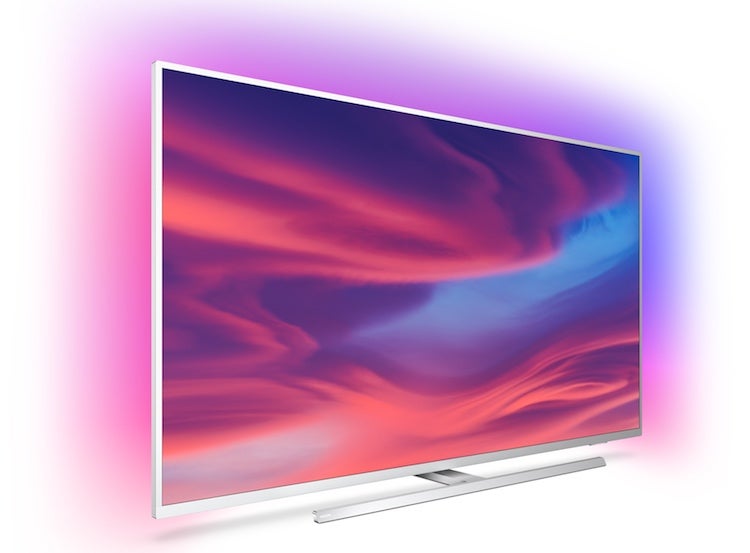 The PUS7304 design certainly stands out from the mid-range pack. Its frame boasts a surprisingly opulent-looking light silver finish that also carries down into its cute T-bar style stand. What’s more, unusually for such a big-screen TV, the stand design lets you swivel most screen sizes (43, 50, 55, 58, 65, and 70-inch options will be available) left or right, to face different viewing positions.

The light silver colour is offset handsomely by Philips’ Ambilight technology, which here casts coloured light from three of the PUS7304 models’ four sides. As ever with Ambilight, this light can be set to follow the colour content of the pictures you’re watching with striking colour and location accuracy.

Meanwhile, The One’s smart functions will be provided courtesy of the latest Android TV Pie (generation 9) platform. We haven’t seen this in action yet, but it’s rumoured to bring a substantial improvement to Google’s TV interface.

It’s great to see that the 7304’s smart features include built-in Google Assistant and compatibility with Alexa devices for voice control too.

When it comes to satisfying the picture quality component of The One series’ supposed all-round sweet spot, the sets combine a direct LED lighting system with Philips’ P5 picture processor. 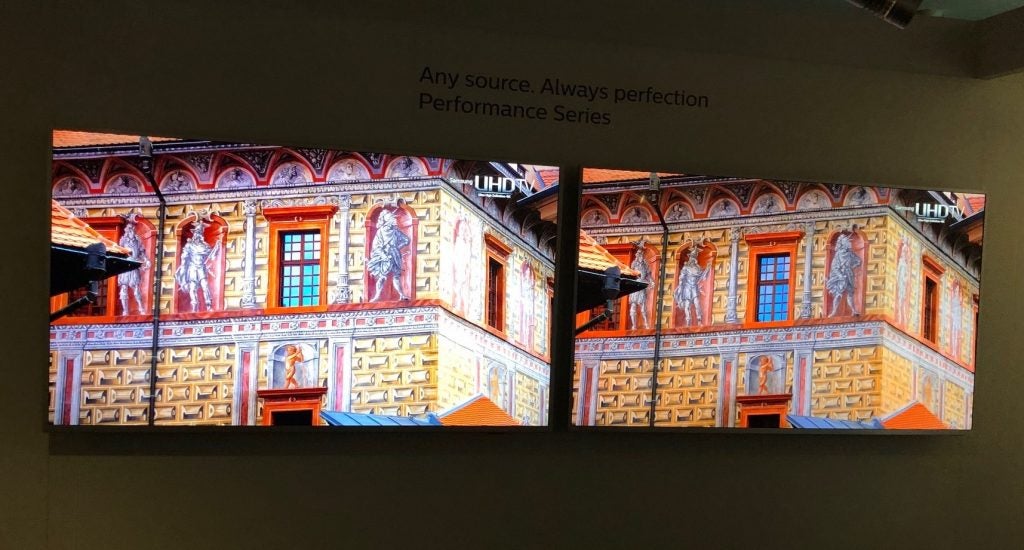 This isn’t the same double-chip P5 version Philips is introducing for its 2019 OLED TVs, but it’s still an improved version of the original P5 engine launched a couple of years ago. This is promising given that even the original P5 was extremely powerful in the way it extended its enhancements into all the key corners of TV picture performance.

Philips has also introduced Dolby Vision HDR support to its 2019 TV range. This joins the brand’s previous support for the HDR10+ premium HDR format, and makes The One TVs the only mid-range – and LCD – models announced by any brand to support both HDR10+ and Dolby Vision.

I wasn’t able to see a PUS7304 TVs running Dolby Vision at Philips’ product unveiling event, but I did get to see one running normal HDR content against a PUS7303 from last year. The results were striking.

The first thing that stood out was how much more detailed and crisp the PUS7304’s pictures looked. The difference was so pronounced that it made last year’s equivalent model look like it was merely HD rather than 4K. Even though those PUS7303s were generally well received. 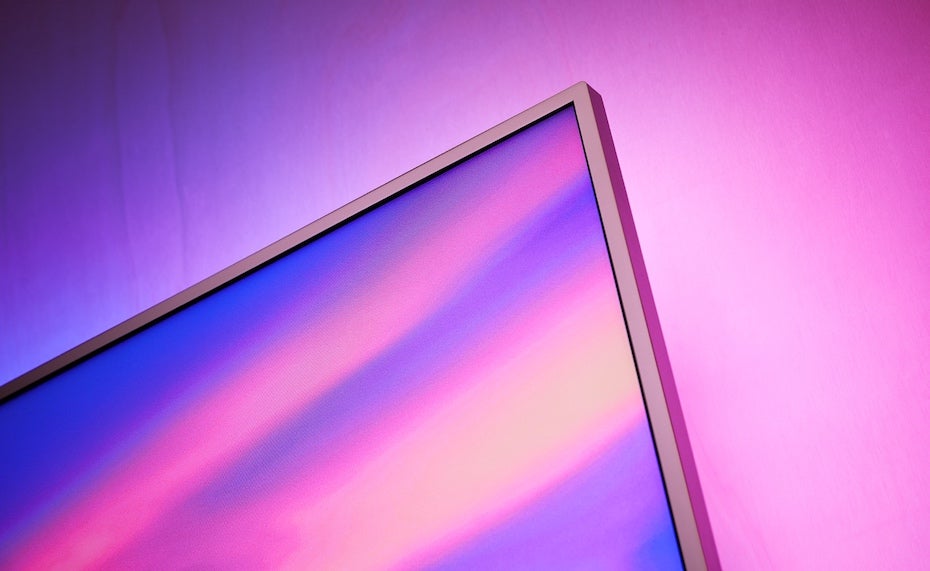 Corner detail of the PUS7304

The One TV’s colour performance also looked comfortably superior to that of its predecessor. Tones were richer, helping the picture enjoy more “pop” and impact. Yet there was also more subtlety in the handling of blends and tiny tonal differences. This contributed to a sense of extra sharpness and refinement that seemed very impressive for a mid-range TV.

In addition, it was refreshing to see how much more effectively the PUS7304 retains colour accuracy and saturations in the brightest parts of the picture than the PUS7303s.

The image looks more stable, too, with less flickering in areas of fine detail. I suspect from this and previous experience of the P5 chipset that the PUS7304s will also benefit from much cleaner motion handling than their predecessors – although I couldn’t definitively confirm this based on the limited type of content we were shown in Philips’ demonstrations.

One other aspect of the PUS7304’s picture performance that I need to reserve judgment on is black level. The sets use direct LED lighting, which is a great start. But I haven’t been able to confirm if the PUS7304 range uses IPS or VA panels – or, potentially, a mixture of IPS and VA panels across different screen sizes. Sets that use IPS panels tend to struggle for contrast versus VA models (although they offer a wider viewing angle in return).

There was certainly a little greyness in the occasional dark clip or fade to black we were shown during the Philips event. But not enough to make any sort of definitive judgement one way or the other.

Philips also provided us with a demonstration of the PUS7304’s sound quality – again, compared to a PUS7303. In some ways this impressed; certainly, the new model delivers much deeper and more consistent bass. Male voices sound richer and more rounded, too, and the sound stage displays greater scale, spreading high and wide of the main TV chassis. 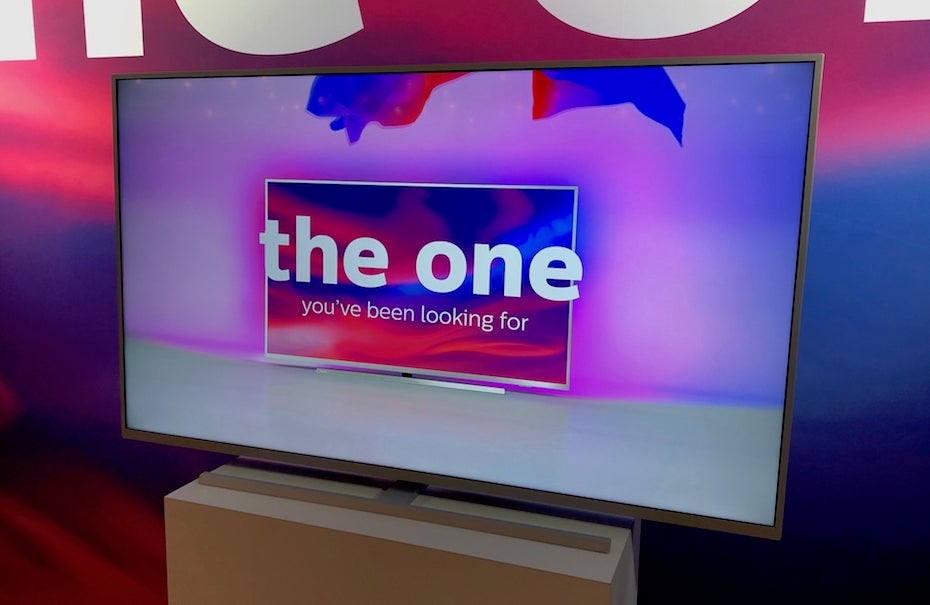 The PUS7304 is being positioned by Philips as The One – the perfect mix of price, performance and design

There was no rattling or distortions from the drivers either, despite the obvious uptick in power and scale.

There was one issue, though: namely that the sound appeared significantly muddier than that of the PUS7303. It was if the sound was emerging through a closed door and losing some of its treble detail and balance in the process.

Philips was quick to point out that the TV’s audio design and tuning isn’t locked down yet, so what we heard shouldn’t be taken as representative of the finished product. I also got the feeling that it could be a sound system that benefits from very high volumes and quite precise positioning in your room. But it certainly remains to be seen if The One TVs will be quite the mid-range audio heroes we’d love them to be.

Look out for full reviews of this super-promising – provided their price is right – series of mid-range TVs in late spring.