It’s early May, spring has sprung and it’s time to think about dragging the tent out of the loft for another run of squelching in the mud and trying to stay cheerful in the midst of our nation’s interminable weather.


For some of us, it’s the lure of the festival that drags us away from our comfy homes and TV screens, while for others it’s just an affordable holiday option in these miserable times, but whatever reason you have for embracing the outdoors life, there’s always one minor problem. Can you go cold techie for a few days without your PMP, handheld games console, digital camera and smartphone? Do you charge all your batteries and hope for the best? Or do you find some way of recharging your devices so you can enjoy rural life or festival action without losing touch with the modern world any more than desired?

If the latter sounds good to you, then Philips Power 2 Go SCE7640 rechargeable power pack is one way you can go. Inside the compact plastic casing rests a Lithium-Polymer battery, rated at 1000mAh with a 19v output, or 3600mAh with a USB standard 5.6v output. You charge it at home and then it charges your devices while you’re away. What could be simpler than that?


Of course, a rechargeable power pack makes no sense if it’s a burden in your backpack, but the SCE7640 has been designed to be as portable as possible. At just over 280g in weight it’s a bit heavier than, say, your average digital camera, but not painfully so, and its dimensions – 12cm by 8cm by 2.5cm thick – don’t make it prohibitively huge. It’s hard for a device so simple and practical to be attractive, but the SCE7640 gives it a shot, with a glossy white base and sides and an equally glossy black top. Bar the stamped-in Philips logo, the only things of any real interest are the sockets at the front, and a button and a four-bar LED indicator at the top. 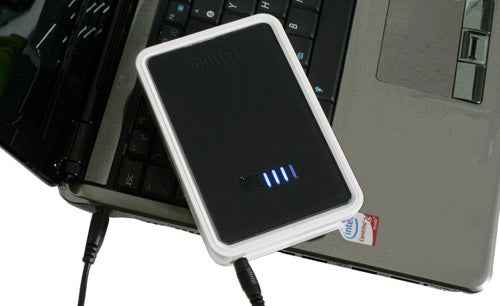 The sockets are, unsurprisingly, very simple. To the right, there’s a 5.6v USB output. To the left, there’s a 19v DC Input and a 16 to 19v DC output. The input takes charge from a 19v, 3.16A outboard PSU, which takes somewhere between 3 and 4 hours to charge the pack. While it’s charging, the four LED indicators light up one by one, all beaming continuously once the pack is fully charged. Once unplugged, you can check the charge level at any time by pressing the small, square button next to the indicators. The more bars, the more power you have left.


The key thing with a product like this is the device support. After all, if it doesn’t work with your particular line-up of devices, then it’s really no good to you. Luckily, Philips has most of the major bases covered. A nifty slimline retractable cables hooks up to the USB output at one end and one of a range of connector tips at the other.


A mini USB tip covers a large proportion of digital cameras, MP3 players, PMPs and the Sony PSP just on its own, but other bundled tips cover Motorola, Nokia, Samsung and Sony Ericsson mobile phones. Other devices that derive power from USB, meanwhile, can be charged by connecting the USB output to the connection cable originally provided with them. Connector tip holders are provided to keep this little lot in some sort of order, along with a travel bag so you can keep them all together.

The Power 2 Go SCE76040 isn’t any kind of turbo charger, so devices recharge at pretty much the same speed as they would via a regular USB connection. I tried the SCE7640 with a range of devices, and most took a charge without any trouble. My old Sony Ericsson phone, Canon Ixus 40 digital camera and PSP all charged with ease, as did the iRiver P7 I had in for review and a FiiO E5 headphone amplifier.


An old iPod mini and a first generation iPod touch also played ball, though a second gen touch wasn’t feeling so accommodating – Apple is to blame for that one, though. There’s also, apparently, a connector for the Nintendo DS Lite, though my review package (which appears to have been through several wars) did not include it. 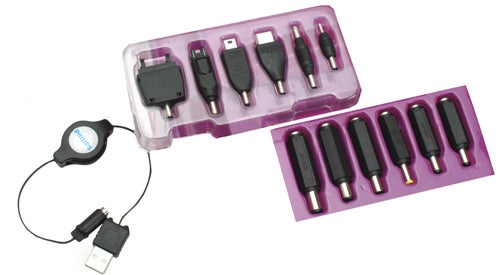 The good news is that there’s enough power here to last a good long weekend. Philips quotes a figure of 60 hours of portable power, whatever that means, but I managed to recharge the Ixus, the PSP and the iRiver P7 without running it down completely, and both the PSP and the P7 are demanding little devils.


However, this power pack has another purpose. Pull out another cable and hook it up to the 19v output, then plug in one of a second range of connector tips, and it will also provide some much needed additional juice for your laptop on the move. Here the amount of extra time you will get depends a lot on the draw of your laptop and its size; you may get a few hours of web browsing and word processing on a lightweight 13in or 14in model, but I struggled to get much over an hour on my 15.4in HP machine. Not all notebooks will run off the SCE7640, depending on their power socket and power requirements, but there’s a list of those that will on Philips’ website, and many others not listed will run perfectly well.

All in all, the SCE7640 is a simple product that does a simple job very well. For all my waffle about camping earlier, it’s probably just as well suited to the long-haul business traveller or those outdoors-going gadget freaks exploring off the beaten track. And while it’s hardly the sort of device you show off to your mates down the pub, it could be really, really useful.


At £130 the price is a little steep for my liking, and in some situations you’d arguably do better with a cheap USB charger or solar-powered charger instead (which can cope surprisingly well even with the light available on a window sill). Given the vagaries of our climate, however, it might be better to have the SCE7640, just in case.


Pack this handy unit, and you don’t have to worry about running out of power on the move. It’s expensive and your mileage will vary, but if you spend a lot of time travelling or enjoying the great outdoors, then it might just be more useful than you’d think.