Just when you thought portable DVD decks couldn’t get any more desirable, along comes Philips with a sumptuous new gizmo that boasts a swanky leatherette cover, making it look like something the ladies from ”Sex and the City” might carry on a night out. The PET940 is one of three new portables in Philips’ latest range, which also includes a model with an iPod dock and another that doubles as a photo frame (like the LG DP391B). But the PET940 is designed specifically with video viewing in mind and features the traditional clam shell design, which not only protects the screen but also gives it a nice compact shape for carrying around. 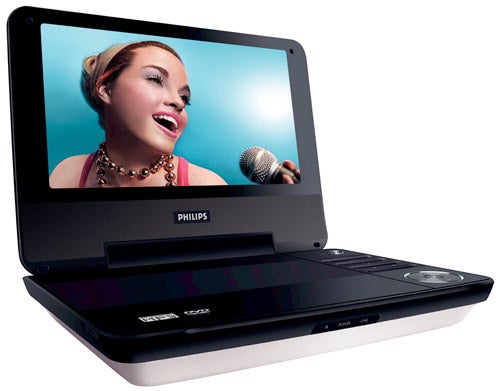 If you don’t dig the faux leather look then the unit is also available with an aluminium finish, and when you flip open the top section the decadent design continues. The insides are decked out in gloss black with a bank of buttons down the right and a shiny silver menu control pad towards the bottom. The disc tray beside it flips up at the touch of a button, and although the 9in, 16:9 LCD screen embedded into the top section is fairly large by portable standards, its resolution is a disappointing 640 x 234 pixels, which means 720 x 576 DVDs will have to be seriously downscaled. More encouraging is the fact that it’s an anti-glare panel, which should keep annoying reflections from ruining your viewing pleasure. 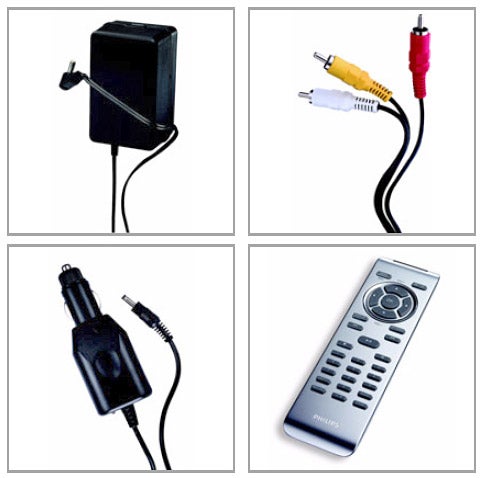 In the box, you’ll find a useful selection of accessories, including an AC mains adaptor, a cigarette lighter adaptor for the car, a composite/stereo audio to minijack lead and a cute silver remote. The unit itself sports a small selection of sockets on the right-hand side, including two headphone jacks for shared listening, a combined composite/stereo audio minijack output and a USB port, which enables you to play music and photo files from memory devices (but not MP3 players or PCs). The unit plays DivX, MP3, JPEG and XviD files via USB or discs.


Thankfully, Philips has integrated the battery into the unit, which means you don’t have a heavy hunk of hardware hanging off the back like the portables of yesteryear, plus it keeps the overall weight to a manageable 1.98kg. Fully charged the battery provides around three hours of continuous DVD playback, and while charging it there’s a handy light on the front that indicates when it’s full. The player is also shock-proof, so it continues to play if you accidentally give it a jolt.

The PET940 is intended to be used with headphones but should you need them there are built-in stereo speakers that pump out 250mW of audio power, which won’t exactly give the neighbours anything to worry about. And when playing DVDs it does everything a regular DVD player can, with trickplay modes like a three-stage zoom, 32x search speed, shuffle, slow motion and A-B repeat.


After hitting the Setup button and exploring the unit’s onscreen menus, we encountered the first problem with the screen’s low resolution – the text inside the boxes isn’t very well defined and looks squashed. But otherwise the user interface is well structured, sensibly separating the options into video and audio. The unit is also quick to respond to the remote, which sports a thoughtful button arrangement and a slim, ergonomic shape – although the lack of separate search keys is annoying. 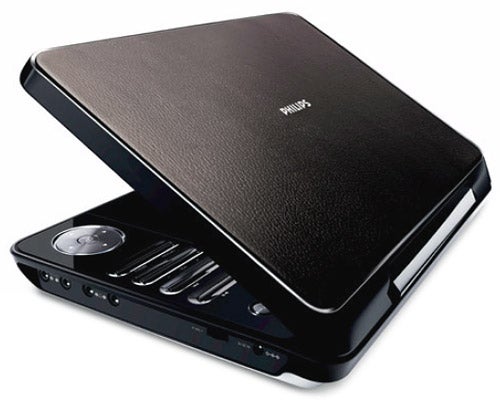 A separate Options menu provides quick access to the important settings during playback (audio tracks, subtitles, zoom and source) while the Display button lets you tweak the performance of the screen, offering brightness and contrast levels, plus cool and warm colour presets. You can also turn off the screen if you’re just listening to music and want to conserve battery power.


The PET940’s pictures are likeable, but that low-resolution screen inevitably hampers the quality. The process of stripping out picture information means that ”Apocalypto’s” mega-detailed jungle surroundings aren’t reproduced with enough clarity and sharpness to make them really stand out – the same images look much better on LG’s 800 x 480-pixel DP391B. The lower resolution means the pixels need to be bigger, which makes their structure visible and gives the picture a gauzy chicken wire effect that our eyes can’t quite ignore, try though they might. Another downside is that diagonal lines and curves look jagged and edges are ill-defined, and because ”Apocalypto’s” crucial subtitles are squashed up like the setup menu text, they’re not as legible as they should be.

However, it’s not all bad news. Colours are solid, with a convincing reproduction of the ”Apocalypto’s” bronzed Mayan skin tones and the rich greens of the jungle, while the screen’s terrific contrast range makes it really excel with dark scenes – shots of Jaguar Paw’s wife and child down a hole at night are surprisingly easy to watch, and you can make out the texture of the rocks and other details within the shadows. 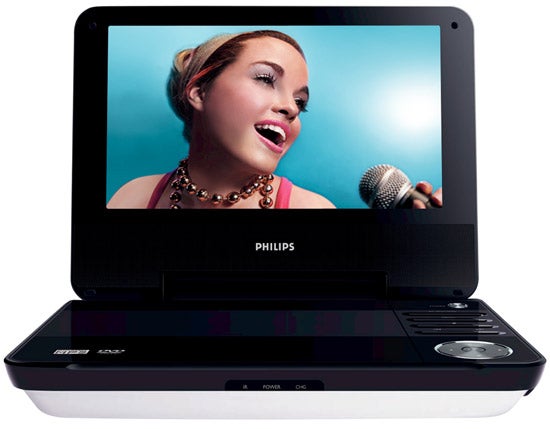 Sonically there’s not much to write home about – the speakers reduce ”Apocalypto’s” thrilling sound down to a predictably thin and weedy whisper, but through a decent pair of noise-cancelling headphones (such as the Panasonic RP-HC500s which we used during the test) the sound is fulsome and genuinely dynamic, with dialogue, effects and music sounding crisp and undistorted.


Playback of JPEGs is also adversely affected by the 234-line screen, but a few of our heavily compressed MPEG-4 video clips didn’t look too bad, possibly because they were a more natural fit for the screen’s resolution. MP3 audio files and CDs are hugely enjoyable through headphones.


Philips’ excellent work in the styling department is undone by its decision to include a screen with a resolution significantly lower than that of DVD, resulting in pictures that lack detail and definition. If LG can include a higher-res screen on their DP391B 8in model then it’s a shame that Philips couldn’t have done the same. It doesn’t make the PET940’s picture quality a complete disaster though, and the kids watching in the back of the car probably won’t notice the difference, but viewers with more discerning tastes might not like what they see.