Along with Toshiba and Sony, Philips is one of the biggest players in the portable DVD market, flying the flag for removable media while all around them are turning to hard-disk devices. The Dutch company’s success lies in the fact that its portable decks are consistently the most attractive and technologically advanced on the market – and its latest flagship model is no exception.


The PET1030 comes equipped with a 10.2in, 16:9 screen, which by portable DVD standards is pretty big, but Philips has built it into a remarkably slim and compact unit. It’s also one of the most attractive portables around, sporting a beautiful glossy white finish on the outside and black styling on the inside, with a few sparkly silver bits thrown in for good measure. 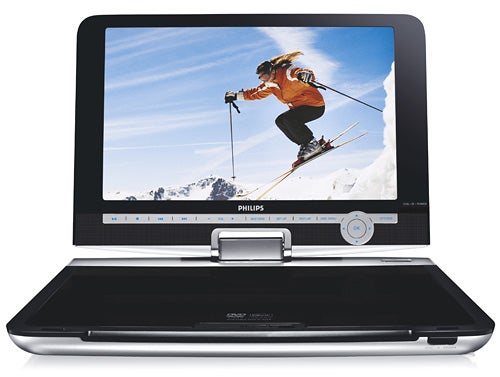 The top half flips up laptop style and can be swivelled 180-degrees for added viewing flexibility – turn and tilt the screen right back and it turns into a tablet-style device. Another nice touch is that the speakers and buttons, which include playback and menu controls, are fitted flush into the space below the screen, which reduces the clutter factor – leaving the lower section as one big disc flap.


The PET1030’s slim, lightweight profile is made possible by the inclusion of a built-in rechargeable battery as opposed to a clip-on pack, which when fully charged offers up to five hours of continuous playback – a decent amount of juice compared with rival players that tend to conk out after three hours. 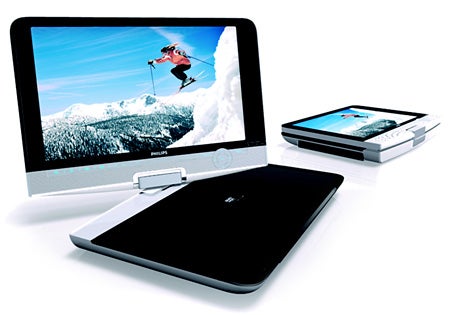 In terms of connections, Philips has been extremely generous, fitting the right hand side of the unit with a USB port, an SD/MMC card slot, S-video and composite outputs (for using the PET1030 as a regular DVD player with your TV), composite video input and a coaxial digital audio output for listening to Dolby Digital and DTS 5.1 soundtracks through a suitably equipped receiver.


Using either the USB or SD card slot, you can view JPEG photos, play MP3 or WMA music files and watch DivX videos on the device, but it will also read these from CDs or DVDs. The unit accepts a pleasing range of disc types, including DVD+R/+RW, DVD-R/-RW and CD-R/-RW and it also supports DivX VOD, offering the relevant DRM code in the setup menu.

The screen resolution is an encouraging 800 x 480 pixels, which means the PET1030 can almost reproduce DVDs in their native resolution and reduces the chance of seeing the panel’s pixel structure, which can affect picture clarity. Interestingly Philips calls this a Zero Bright Dot screen, which is the company’s guarantee that you won’t find any blank pixels, often a side-effect of LCD mass production. And sure enough, our review sample was completely free from bright dots. Hooray!


You can make simple adjustments to the screen’s brightness, colour and contrast by pressing ‘display’ on the remote. Other features include an array of trickplay functions, including a three-stage zoom, three-stage picture shrink, A-B repeat and up to 32x search speed. According to the spec sheet, the built-in speakers muster 250mW of power, which is fairly puny but you’ll probably use the headphone jack anyway. 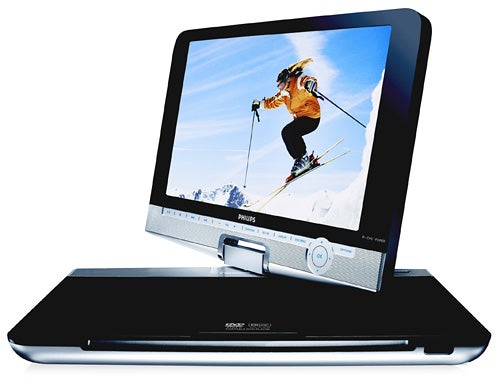 In the box you’ll find a decent range of accessories, including an in-car mounting kit, cigarette lighter adaptor, travel bag and slinky little remote, which is attractively styled in silver and white and sports a helpful arrangement of buttons.


The PET1030’s job is quite simple so there isn’t a great deal to configure, but making basic changes is easy thanks to the excellent menu structure. Aside from the main setup menu, there’s an options menu that lets you access some of the more frequently used functions, like subtitles and zoom. The unit responds immediately to remote commands without any annoying pauses.


Philips also says the unit is shock-proof, a claim that we tested with a few light taps and bumps and we were amazed that the DVD continued to play through it all without even the slightest blip.


But even more impressive is the PET1030’s picture quality with the screen turning in a fantastic performance with our ”Batman Begins” disc. What strikes you first is the sharpness of the image – lower resolution portable DVD screens have the tendency to look jagged because they’re cramming all the DVD detail into fewer pixels, but here the image looks sharp and fluid.

Small details, such as rain falling on the Gotham City streets or tricky textures like Scarecrow’s Hessian mask, are reproduced clearly and sharply, while edge definition is forceful and smooth. What’s more, the player’s colour reproduction is right on the money, making skin tones look realistic but at the same time lending a richness and vibrancy to strong hues, such as neon lights.


The player’s solid black handling lends a boldness and density to the picture that makes for a really enjoyable and surprisingly cinematic watch. Even dark scenes don’t trip it up – you can make out what’s going on during dimly lit scenes in the bat cave or on the city streets at night. The screen’s viewing angle is also wide, enabling you to view it almost from the side before there’s any significant loss of picture quality. 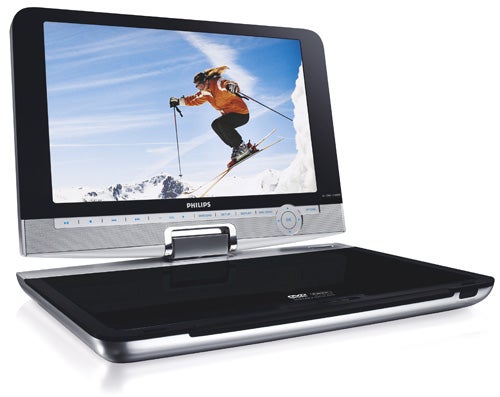 Our only picture criticism concerns ambient light, as any glare on the screen wipes out the contrast, and there’s a touch of noise and motion blur here and there, but generally this is an excellent screen that delivers top-notch pictures.


Inevitably, sound quality through the speakers is poor and fails to do justice to our movie’s rousing soundtrack, but through headphones it improves immeasurably. Furthermore, DivX, MP3 and JPEG playback from USB is slick and glitch-free, making this a reliable entertainment hub for your travels.


The PET1030 is a superb portable DVD player, which uses its high-resolution 10.2in screen to great effect with first-rate picture quality. It also boasts a gorgeous, user-friendly design and compatibility with a wide range of media, but the icing on the cake is the inclusion of USB and SD card slots, which makes this more than just a DVD player. We would have expected to pay a large premium for this sort of functionality, but the affordable price tag makes its talents all the more remarkable.