Philips can usually be relied on to deliver some of the most feature-rich TVs in the business. But right now it has to be said that the Philips’ NetTV platform is something of a disappointment.

Not that the reasons for this are immediately obvious. For the NetTV interface is a rather pleasant one (once you’ve got through a few tedious ‘introduction’ screens). The services available appear in tidy, high-definition rows of colourful icons that make it instantly obvious what’s what.

The Philips remote control for its Smart TVs is a work of genius too, doing a brilliant job of delivering maximum functionality from minimum buttons without feeling complicated.

However, it doesn’t take many moments to figure out NetTV’s main shortcomings: a fairly serious shortage of content. There are highlights of the BBC iPlayer, the HiT Entertainment network, the Cartoon Network, Box Office 365, AceTrax, Twitter, Facebook and iConcerts. But this isn’t enough to prevent NetTV from feeling distinctly short of stuff – especially free video content services. The lack of Skype is unfortunate too. 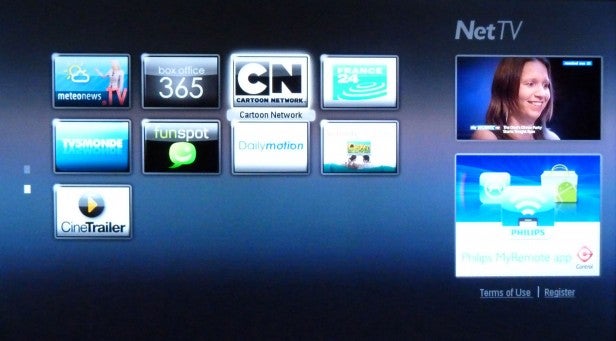 It’s also clear fairly quickly that NetTV’s interface, while pretty right now, will quickly start to feel clunky when/if Philips starts to deliver on its high-content promises. All the app icons just appear in a simple list, with no obvious genre sorting or ordering. This is OK while everything is visible on a single screen, but it will definitely become an irritation once you have to scroll down to multiple screens once content levels improve.

Philips is currently showing little to no interest in providing lots of the ‘small’ apps so rife on the LG and Samsung Smart TV services – but we have to say this isn’t necessarily a bad thing if it stops the good stuff getting lost among dross.

Arguably the high point of Philips’ online offering is its integrated Web browser. For this is for us the best open Web browser built into any Smart TV to date, thanks to both the clarity of its presentation and the surprisingly usable system it uses for inputting text and navigating pages using just the provided TV remote.

All in all, while NetTV is OK so far as it goes, it doesn’t currently go far enough in terms of either its content or its ‘vision’ for the future. Hopefully Philips’ Smart TV hook up with LG announced at last year’s IFA show in Berlin will start to bear fruit sooner rather than later.