We’re no strangers to high-priced, high-end streaming-audio systems (or to love), but there’s no denying that the Philips Streamium Wi-Fi component Hi-Fi system MCi900, to give it its full name for the first and last time, is about as far from cheap as watching the X Factor is from a good time. Even being able to find it online for nearer £900 than its £999 MSRP doesn’t exactly make the MCi900 the bargain of the century – that’s still over £100 more than a Sonos BU250 bundle; which makes up for its comparative lack of bundled speakers by offering multi-room streaming capabilities. 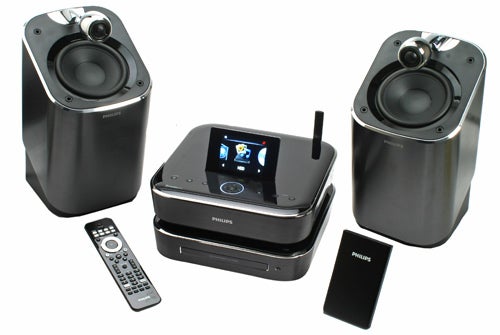 If you’re still wondering what the Philips MCi900 could possibly offer to justify its £900 price tag you clearly haven’t seen the system because, well, “wow” just about covers it, to be frank. The MCi900 is available in either a silver or titanium finish; the latter being our favourite. Of the two central units what isn’t aluminium is glossy black plastic – which manages to look elegant, not cheap – whereas the speakers use matt plastic at their base. It’s a massive improvement over the MCi500 system we’ve previously looked at – and that was hardly a disappointment. 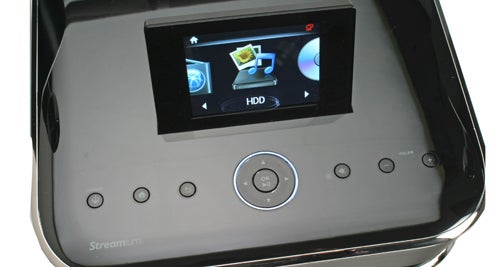 The non-speaker component of the MCi900 is split into two parts, joined by a proprietary connector which is too short to allow these segments to be anything but stacked atop one another. The lower half has a CD/DVD tray at its front and the upper half a set of on-device controls up top, in front of a 3.5in colour LCD. We’re not so sure the fixed display is good idea – we’d have liked this to be foldable to both hide and protect it when not in use – but it does its job.

At the rear is a particularly comprehensive set of inputs and outputs, along side the MCi900’s Wi-Fi antenna. The top segment houses the power input, a phono audio input, a USB port and an Ethernet port alongside the speaker connection points. Gaining another mark in its favour, the MCi900 uses cinch connectors for attaching the speaker cables, rather than the nasty, cheap spring-clips we so loathe the presence of on lesser audio kit. 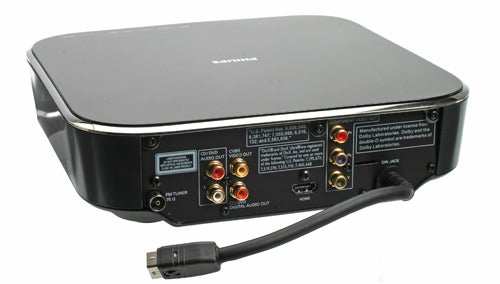 The lower half of the MCi900 is home to HDMI, Composite and Component video outputs, an FM antenna connector, and a coaxial digital audio output for connecting the MCi900 to a separate speaker system – although this only works for disc playback, not audio streaming. Aside from a headphone output and an aux-in we can’t think of anything that’s missing. If you’re not going to need these outputs, and don’t care for disc playback, it’s possible to disconnect the lower segment of the MCi900 and use the streaming-capable top section by itself, saving a little space.

The MCi900’s speakers are, if nothing else, certainly a bit contributor to the systems overall visual appeal. The main design feature of these speakers is immediately obvious, but the choice to mount the 1-inch tweeter on a solid aluminium arm isn’t just aesthetic. By freeing the driver from the main enclosure, Philips says, the speaker is also freed from the effects of any standing waves and vibration in the main body; and the positioning also improves projection. 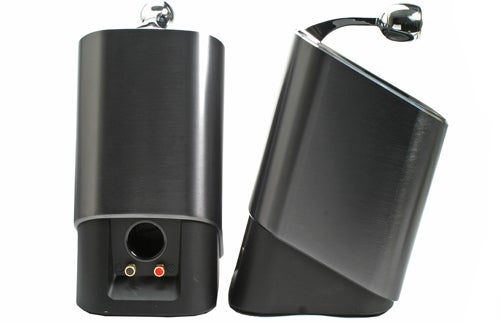 The 1.8-inch thick aluminium cabinet doesn’t do any harm for the rigidity of the speakers either. And as well as looking interesting, the angled design of the cabinets purportedly improves projection of the 5in woofer’s output into a room. Whatever voodoo Philips put into figuring out this speaker design, it’s worked. The MCi900 sounds absolutely fantastic. Music jumps out of the speakers in a way that’s almost disconcerting realistic thanks to the excellent sense of space they create. 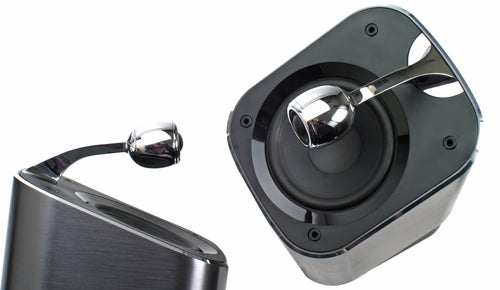 We had a little giggle in the office when we heard the MCi900 described as “sharp” on the BBC’s Something for the Weekend, but having spent some time with the system we have to concede that it’s not a bad one-word summation. The isolated placement of the tweeter definitely seems to have had the desired effect as high-end notes have a great sparkle. 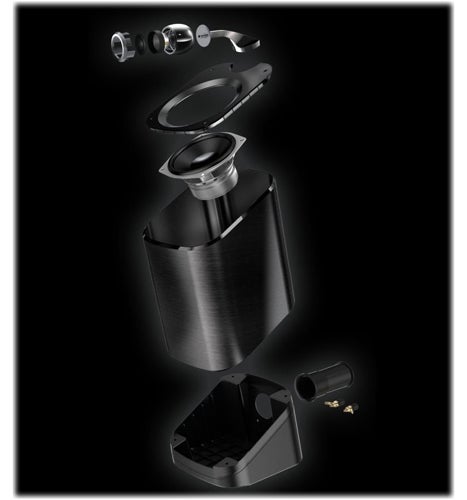 Female vocals particularly benefit, as proved by a run through Paramore’s brand new eyes. Whether you like their particular brand of angst-ridden pop punk or not, there’s no denying that Hayley Williams can sing – we defy you to listen to the stripped-back tracks The Only Exception and Misguided Ghosts and disagree. But we digress, the point is this: the high-end clarity exhibited by the MCi900 really works – the sound of fingers sliding down strings for a chord change is enough to send a shiver down your spine. 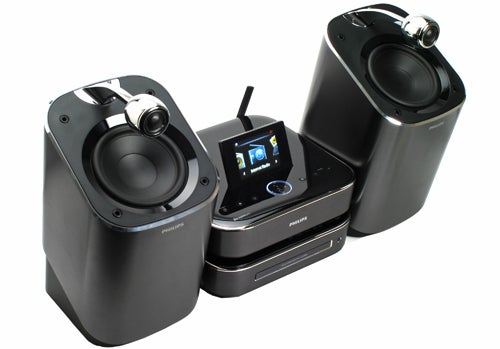 A play or three of Bowers & Wilkins’ London symphony Orchestra compilation showed the MCi900 has no problem handling big, complex renditions either. There’s a real sense of depth to the system’s output, and while you’re not quite able to close your eyes and imagine you’re ‘really there’ you will feel like you know what it would have sounded like were you present. 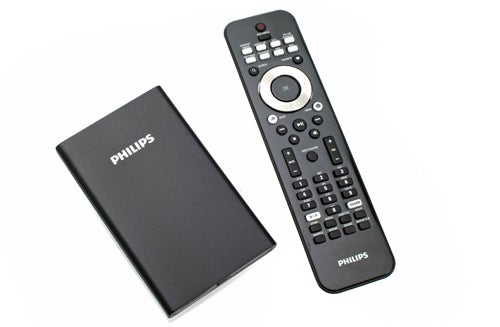 It’s worth noting, too, that the Philips MCi900 does a cracking good job of handling almost dangerously loud volumes. You’ll be annoying neighbouring counties, rather than neighbours, before the audio starts to get a little muddied and crowded. To top it all off, although MCi900 is heard at its best in the speakers’ sweet spot, it does a commendable job of filling a room and still sounds pretty good off-axis.

Although primarily geared towards streaming audio, the MCi900 does come with a 160GB hard drive. Unlike previous models this isn’t built-in, but instead is provided in a small caddy, along with a stand which works about as well as a marshmallow syringe. While we liked previous Streamium systems’ ability to rip CDs to the internal storage, we’re also quite keen on the provision of a portable hard drive as it makes transferring files to the MCi900 a much simpler affair. Drag and drop transfer over USB is much easier than pulling files from a server onto the MCi900 would have been. 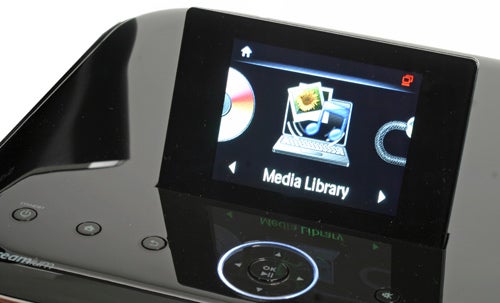 Although Philips supplies a copy of (and licence key for) Twonky Media Server, for both Windows and Mac OS, with the MCi900 it’s not necessary to use it. Any uPnP compatible server will do fine, although Twonky does have the advantage of letting you control the system from your computer and integration with iTunes – from which the MCi900 can’t stream.


Despite its DivX-capable certification the MCi900 can’t stream videos, nor can it play such files from an attached hard drive. But really the disc drive is primarily there for playing CDs – that on-disc DivX videos and normal DVDs can be played back is an added bonus, not the system’s raison d’être.

Audio playback, however, is, so it’s unsurprising that the MCi900 has support for MP3, AAC, WMA, OGG and FLAC files. 24-bit FLAC is off the menu, but anyone seriously interested in listening to such high-quality audio wants to be spending more than £900 on a set-up to do justice to it anyway. We’d have liked to see Apple Lossless supported, as rival streaming systems including the Logitech Squeezebox range and, of course, Sonos do, but the omission shouldn’t be a deal-breaker. 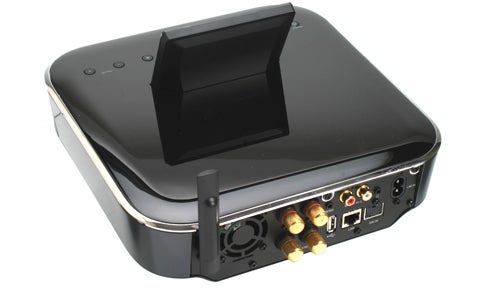 Where the MCi900 really loses out to Squeezebox, Sonos, and their ilk of such devices is in its Internet-based streaming. Or, more accurately: its lack thereof. While the MCi900 can play Internet radio stations, there’s no Napster or Spotify streaming, no Last.fm scrobbling and no podcast support to speak off. Although we can see the argument against such functionality, there are always going to be times when you don’t have the music you want to listen to available and it’s far more practical to use Spotify to sate a sudden craving for a bit of Jimi Hendrix than it is to root around in an attic for a CD which you know is there somewhere. 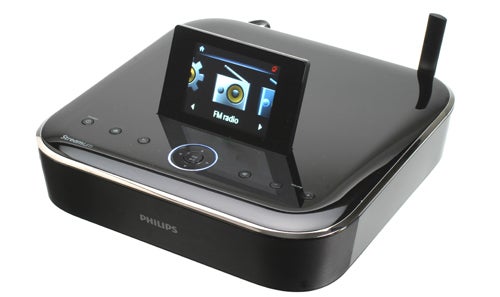 There’s also the fact that if you are only interested in local streaming audio system, and don’t care about disc playback or Internet-based streaming, then a Squeezebox Touch paired to a set of high-quality speakers such as the awesomely stylish and great-sounding Ferguson Hill FH007 won’t cost you any more than the MCi900. Whether a different system set-up would sound better than the MCi900 is verging into the subjective – one man’s delicate and transparent in another man’s flat and lifeless – but the point stands that you’d be getting more, if not outright better, options. 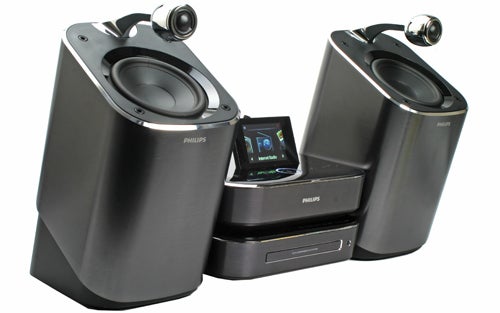 Philips’ MCi900 does have that it’s devilishly stylish design in its favour, though, and the convenience of an all-in-one set-up can’t be dismissed. So while the Philips MCi900 may not comprehensively best its rivals, it makes a damn compelling alternative.


The Philips MCi900 looks fantastic and sounds it as well. It may not be as expansible as a Sonos set-up or a Squeezebox, or offer as comprehensive a range of music sources, but it does everything it can excellently. If its particular set of abilities lines up with your requirements, and you’re looking for a stylish all-in-one solution, we’ve no reason not to recommend the MCi900.