What is the Philips Izzy BM5?

The Philips Izzy BM5 is the latest
attempt to make multiroom audio accessible. The BM5 is the first among a
whole range of “Izzylink” speakers to appear in 2016, which will use
the same system.

Costing only £99.99, the Philips Izzy is an
unintimidating purchase with which to begin your journey into setting up
a multiroom system. However, a far cry from the Sonos Play:1, that journey might be halted no sooner than it begins because, quite simply, it doesn’t sound very good.

If
you’re put off by the closed style of Sonos and the complexity of some
other rivals then the Philips Izzy’s system is worth some investigation.
But in pure speaker terms, this is far from a stand-out. 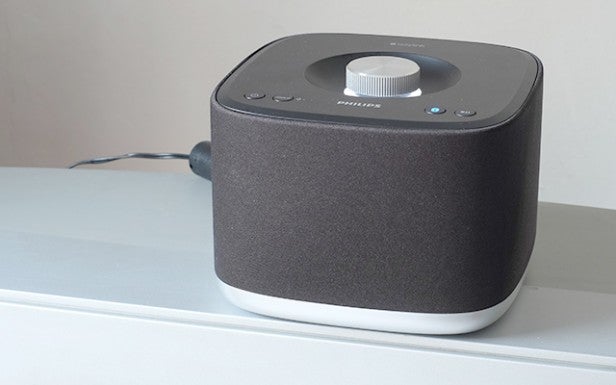 Let’s
forget that last point for a minute, though. The Philips Izzy BM5 is a
cute-looking unit. A squat, curvy block of plastic with a fabric-covered
grille, it’ll easily slot into a number of places pretty innocuously.
Bedside table? Windowsill? No problem.

Given its relatively
dinky size and use of Bluetooth, you may be surprised to hear that the
Philips Izzy BM5 doesn’t have a battery – it’s mains-powered only.
However, the main idea behind this speaker isn’t one of portability. 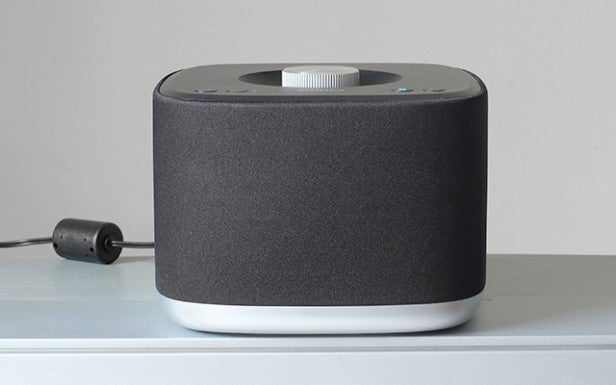 The
whole point of the Izzylink family is that it gets you multiroom action
quickly and easily, without blocking off any services. Although I did
have to crack out the instruction manual to set up a few of the more
advanced features, on the whole, the Philips Izzy BM5 was fairly simple
to get-going.

Don’t expect an easy setup route via an app,
though – when it comes to interaction with the Philips Izzy BM5, this is
one of the few multiroom systems that relies solely on Bluetooth.

Hook
up to it just as you would with any other Bluetooth speaker, then a few
button presses will enable you to group together other Izzy speakers. I
was sent two speakers by Philips, and without the instructions in-hand,
I did manage to get a basic pair-up (there’s a dedicated group button)
within around 30 seconds. For anything more complicated, such as
changing which unit is the master and which is the slave, I had to crack
out the manual however.

The speakers actually communicate over Wi-Fi Direct, but you don’t have to worry about that side of things. 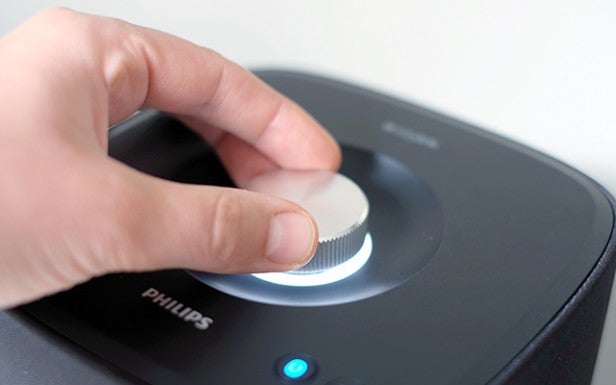 The
Izzylink system lets you set up groups, with a master speaker and up to
four “slave” units. This helps to circumvent the app-based faff of most
other multiroom systems.

I’m not convinced I’d necessarily want such a system over rivals, though. Currently, it’s far from perfect.

First,
you can’t yet stereo-pair Philips Izzy BM5s. On a multi-speaker setup,
volume levels need to be altered per speaker, since their amp levels
aren’t linked. When in group mode, there’s also a significant delay
between making a command on your phone and it being taken on-board by
the system. It feels sluggish. 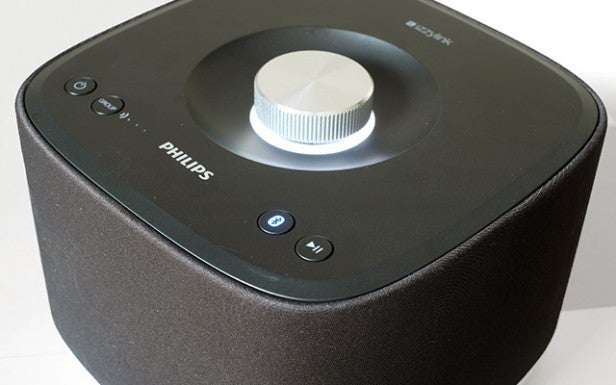 You
also miss out features such buttons that let you get back to a Spotify
playlist with a single press. All instructions are via a phone.

However, Philips is probably hoping that, even if you remain unconvinced by its mulitroom credentials, you’ll still be able to appreciate the Izzy BM5 as an affordable Bluetooth speaker.

However,
the Philips Izzy BM5 doesn’t make a great case for itself with its
sound. Let’s begin with the positives, however.

The
Philips Izzy BM5 is able to achieve reasonably loud volumes, and has a decent amount of
low-end power for a speaker that has only two 2.5-inch drivers and a
bass reflex port. I expected, and hoped, it’d use a bass radiator, but
it doesn’t feel as though it really needs one at mid-level volumes. It
doesn’t sound thin.

However, there are several areas in which this speaker falls down. First, there’s zero sense of sophistication, no touch
of that “hi-fi” vibe, with a flat and dead-sounding mid-range. This
leaves vocals sitting on the mix, with none of the “3D” separation you’re likely to hear with a decent speaker. It’s a very undynamic sound, even compared
with some smaller, lower-cost Bluetooth speakers such as the Jam Heavy
Metal and Pure Voca. 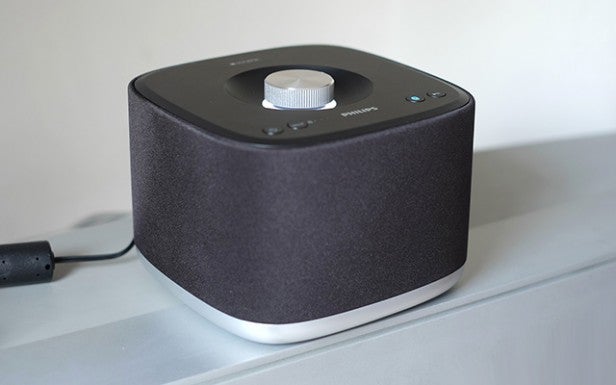 The
higher you turn up the volume, the more problems emerge. Upper-mids display a harsh edge, and with more complex arrangements you’ll
notice an odd form of studio compression as the volume or certain
parts/frequency ranges of the mix go up and down in volume as other
elements fade in and out.

This is probably down to the lack of a dedicated bass driver or radiator to take on some of the responsibility of providing much of the lower-end volume.

I could live with all of the above,
though, if it weren’t for the Philips Izzy BM5’s unmistakably “basic”
sound. If such sound were from a DAB radio for the kitchen, then I’d be okay. However, despite its wireless credentials, this is “just” a
speaker, and therefore relies heavily on its sound quality.

The biggest problem for the Philips Izzy BM5 is that many rival speakers around this price sound better. The Jam Heavy
Metal has greater finesse, and it’s absolutely trampled by the £150 Ministry of Sound Audio M. 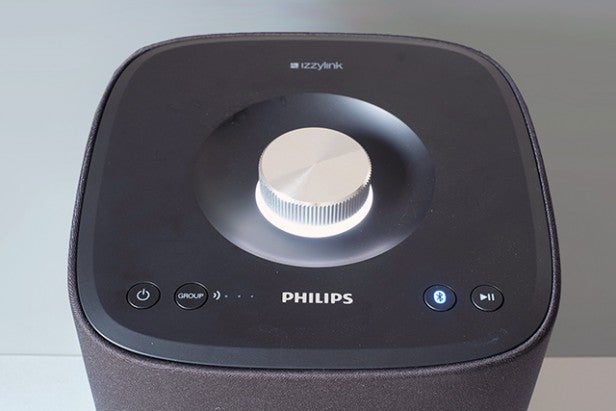 Should you buy the Philips Izzy BM5?

The Philips Izzy BM5 is the very first Izzylink
speaker, so while I’d like to have viewed it in the wider context of the
family of speakers it’ll eventually be a part of, I don’t yet know what
that family will contain.

Its infrastructure does offer a
neat, low-fuss approach to multiroom. Although it doesn’t provide the functionality to flick
between rooms in a second using your phone, or send different content to
each speaker, you can at least set up the whole system without using an app at all,
and play the same audio through up to five Izzy speakers within a house.
It’s not perfect – and is really a little lo-fi among its multiroom
peers –but its almost mechanical approach has a distinct appeal.

While the Izzy BM5 has “beef” to its sound, the similarly priced (and also not amazing) Pure Jongo S3
is significantly more refined. I imagine that the Izzy is housing similar
drivers to the Philips SW700M “Spotify” speaker ,
which has already tumbled down to under £35 online (granted, it is an end-of-life product). Audio fans might
want to wait until the Izzy drops further below £100 before investing.