The Philips Hue Go lets you unplug your smart lighting and take it with you – that in itself is unique. The 2019 model gains a boost in lumens and battery life, but Bluetooth is the key addition, giving you more control when you're out of the house. An essential addition to the Hue family? Not at all – but one that’s a lot of fun.

What is the Philips Hue Go?

When it launched in 2015, the Philips Hue Go felt like a great idea in need of better execution. Now, four years on, Signify (Hue’s owner) has made several improvements to its portable smart light, which are seemingly minor in isolation but combine to make the Go a much better, far more portable product.

The core idea remains the same: the Go is supposed to be a Hue light you can take anywhere. Well, almost anywhere. It runs off a battery and can withstand humidity, making it perfect for a trip out to the garden or maybe the beach. Just don’t get it wet – it isn’t waterproof.

This portability is just as useful in the home. Perhaps as a desk light for working during the day, but which you can carry to the nightstand for reading at bedtime.

The shape of the Hue Go hasn’t changed since its conception. Its domed design allows it to sit like a bowl, but the moulded stand means you can also prop it upright.

The stand is in fact the one thing that’s changed in the new model. It now sits to the side of the power socket, where it used to be located directly below, making propping up the Go super-awkward. Now it’s only a little awkward, since the stand sometimes isn’t enough to stop the power cable shifting the Go on its axis – but, hey, it’s less awkward than before. 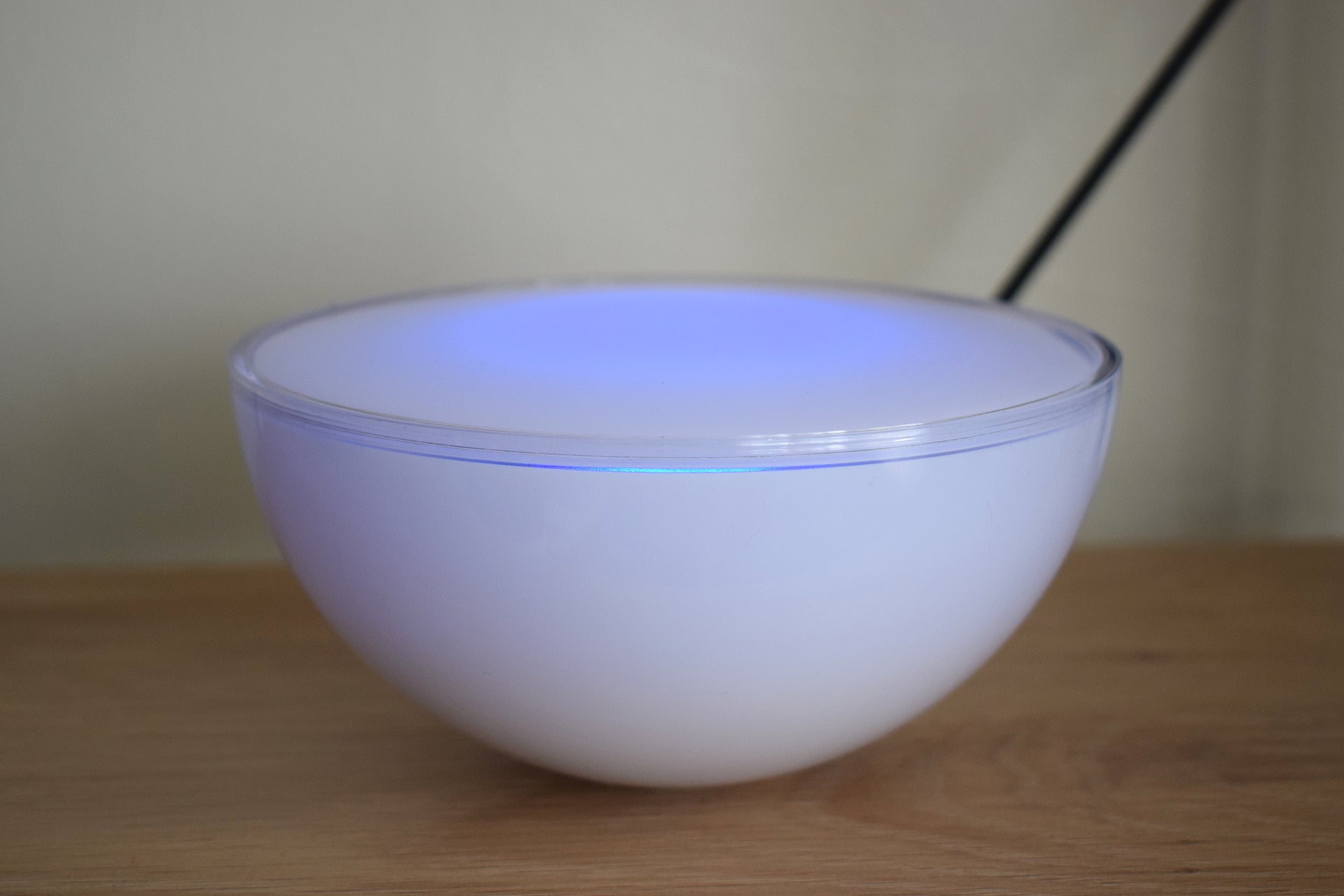 The light can sit like a bowl without support

Not that the Go necessarily needs power, since it’s a light that’s designed to be portable thanks to its built-in battery. You may prefer to keep the lamp connected, but you can also pull out the cable and take the Go for a walk any time, so long as it’s holding some charge. 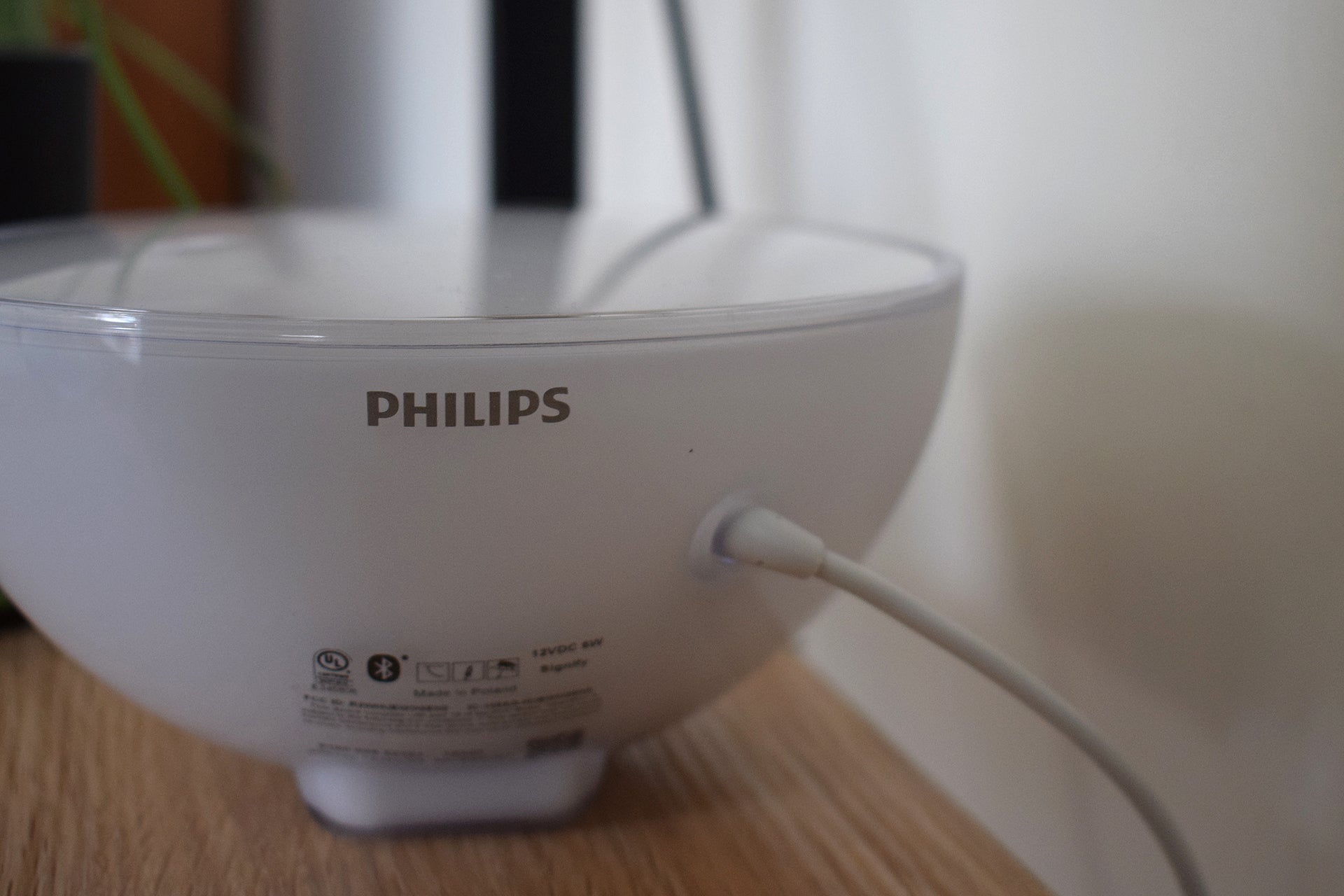 You won’t need the power adaptor all the time, as the light can run from its internal battery

In fact, the Go is ready to “go” right out of the box. The beauty of this Hue product is that you don’t even need to connect it to Wi-Fi or a smartphone to use it. Just tap the button on the Go and you can cycle through several pre-set scenes, and there’s nothing stopping you from using those and never connecting the Go at all.

But of course, this being Hue, you’ll get the most from it used with a smartphone. The good news is that you no longer need a Hue Bridge to use it; the 2019 model supports Bluetooth. If you’ve used Hue Bluetooth already then you’ll be aware that there’s a separate Hue Bluetooth app that you’ll need to download.

Connecting the Hue Go to the Bluetooth app was almost as fast as linking via the Bridge in the regular Hue app. Just remember, if you’re using Bluetooth then you’ll only have  “smart” controls when in range of the Go. There’s more coverage of how the app works in the full Philips Hue review.

Philips Hue Go features – Smart lighting without the wires, but mind the battery

Beyond Bluetooth, the new Go benefits from a few other improvements. For one, brightness has improved with the Go capable of 520 lumens, up from 420 lumens of the old model. When you disconnect the power cable, the Go will reduce its brightness to preserve battery life, but you can boost it back up again in the app if you wish.

One of Hue’s greatest strengths is its versatility, and when it comes to platform support, the Go covers the Holy Trinity: HomeKit, Alexa and Google Assistant.

HomeKit requires a Hue Bridge to work (and a HomeKit hub for remote control, which can be an Apple TV, HomePod or iPad), but the other two can run with Bluetooth. In fact, I’ve been using the Go over Bluetooth with Google Assistant for the past couple of days, and it’s been perfectly responsive.

I mentioned the pre-set lighting modes on the Hue, but once connected to the app you can set it to any of the 16-million colours on offer.

Want to know how I use the Go? Right now, it’s sitting on my bookshelf emitting its “cozy candle” mode, a soft orange that gently flickers to mimic a fire. When I go to bed, I’ll put it on the nightstand and use it to read, opting for one of the brighter, but still soft, lights. 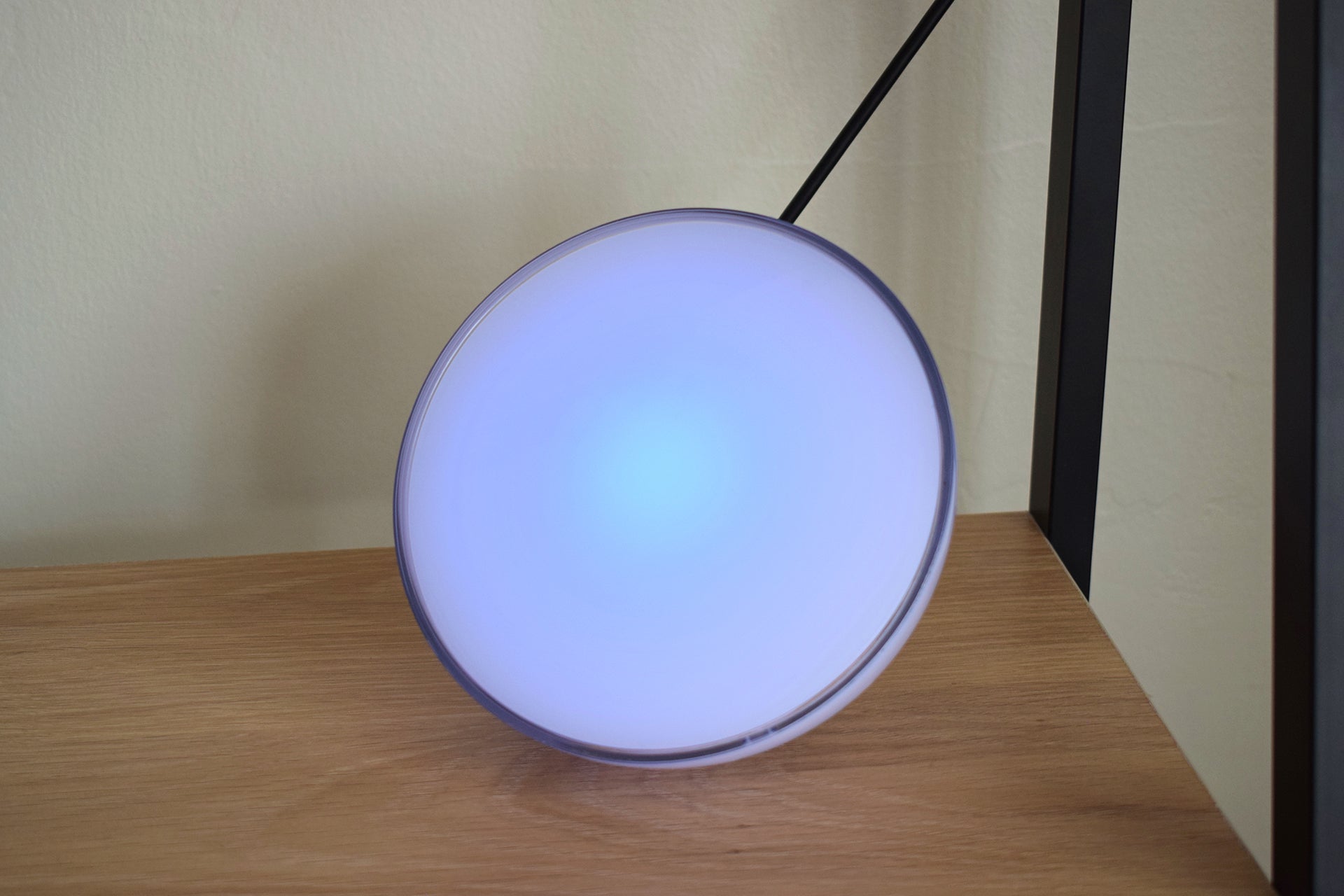 You’ll probably use it for different reasons. I don’t have a garden, but if I did, I’d definitely take the Go outside on summer evenings. Of course, battery life is a consideration here, and your mileage is likely to vary.

While Hue has stretched the battery life in lower power modes, the more intensive lights still run at just two-to-three-hours, which isn’t a lot. On the other side of the spectrum, the night light can now run for 24 hours, and the aforementioned “cozy candle” can flicker on for about 18 hours.

For my use cases, I think it’s sufficient – but if I was throwing a garden party or taking the Hue Go to the beach, I might need to consider conserving juice. One of my biggest grievances with the Go is the lack of battery gauge in the app – you have only your guesswork to determine how much battery life remains.

Using the Go with the Bridge means you can group it with other lights into routines and home/away modes, something you don’t get with the more bare Bluetooth experience.

However, of all the products to which Hue has now added Bluetooth, the Go benefits the most. Now, should you take it outside of Bridge range, you still have access to all the possible colour options via the Hue Bluetooth app, something you couldn’t do before.

Should I buy the Philips Hue Go?

The Go is a super-cool little smart light, and if you’re already a Philips Hue user then the Go is a wonderful addition to the family, if not an essential one. If you own the original Hue Go then there isn’t enough here to warrant an upgrade, unless you’re hunting for a Bluetooth option – which does enhance the Go when out of the house.