One of the biggest benefits of flat-panel TVs is that they can be mounted on the wall, but unfortunately the rest of your home cinema system can’t. Until now, that is. A new type of home cinema system has emerged that can be fixed to the wall directly below your set – and the use of clever sonic technology means they can generate 5.1-channel surround sound without the need for satellite speakers and mounds of cables.

These so-called ‘soundbars’ are a tidy, convenient and stylish solution, which makes them perfect partners for plasma and LCD TVs. This version from Philips is one of only a handful on the market, and at just under £500 it’s not bad value for such a desirable and well-featured piece of kit.


The system comprises just two boxes – a wall-mountable main unit that plays DVDs and CDs, and an active subwoofer. Built into the main unit is an advanced digital sound processing technology called Ambisound, which features six independent speaker drivers positioned at precise angles that steer sound beams into the room to create genuine 5.1 surround sound. But the effect isn’t dependent on reflections off walls; instead, Philips says the beams envelop the listener in sound, which means there’s no sweet spot – the effect is the same wherever you’re sitting in the room. 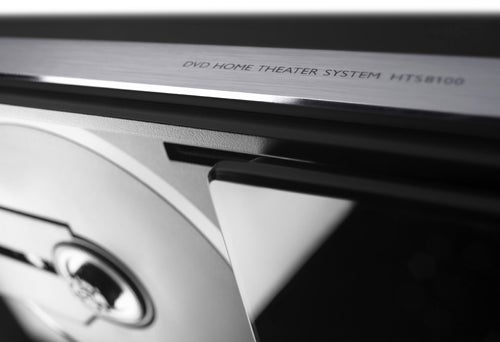 As the HTS8100 is designed to be mounted underneath a flat-panel TV, it comes as no surprise that it’s drop dead gorgeous. All of the amplification is housed inside the subwoofer, which means the main unit is just 13cm thick, and it’s finished in alluring gloss black and brushed aluminium.


But the biggest wow factor comes from the disc loading mechanism, a glass door which slides across at the touch of a button and allows you to click the disc into place. The subwoofer is similarly styled in gloss black but compared to the svelte main unit it’s quite a beast, which might make it difficult to hide. The two components are connected to the main unit with a cable that will need to be concealed or camouflaged if you’re mounting the system on the wall.

Connections on the rear of the main unit include an HDMI output, capable of firing 720p, 1080i and 1080p video signals to a flat-panel TV, plus component video output and an RGB-capable SCART output. Tucked down the side of the unit are a USB port, a connection for an iPod dock and a 3.5mm minijack input for other MP3 players. The subwoofer is equipped with sockets for FM and AM antennas, a coaxial digital audio input and a stereo audio input for playing back external sources through the system. 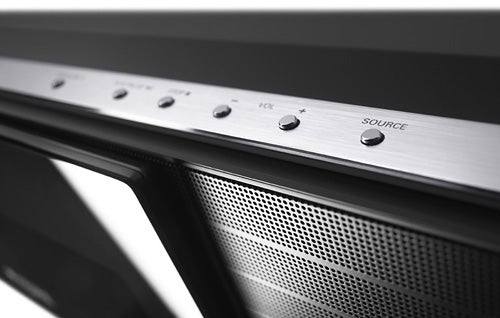 There’s a decent range of features on board, including Faroudja DCDi deinterlacing, support for Dolby Digital and DTS soundtracks, Dolby Pro Logic II and a wealth of equaliser settings with names like MTV, RnB and Cartoon. Their effect is minimal, but fun to play around with.


File compatibility is also wide-ranging, taking in all versions of DivX (up to and including Ultra) plus MP3, WMA and JPEG, all of which can be played back from DVD, CD or via USB. Rounding up the feature list are FM and AM radio tuners, and DoubleBASS – a Philips DSP algorithm that takes bass frequencies below 30Hz and recreates them in the subwoofer’s audible range.

Installing the system couldn’t be easier. The wall-mounting bracket is supplied in the box, and anyone with an ounce of DIY knowledge should have no problem slinging it on the wall. The menu system is straightforward too, allowing you to make basic tweaks to the Ambisound setup or change the HDMI output resolution with minimum hassle. We’re also impressed by the remote, which is reassuringly heavy, well laid-out and styled to match the main unit, right down to the silver trim around the playback buttons.


In terms of performance, the big question is whether Ambisound technology really does create convincing 5.1-channel surround sound or not. Well, a blast of ”The Matrix” on DVD demonstrates that the results are nowhere near as well separated or accurate as a true 5.1-channel setup, but the overall effect is light years ahead of any 2.1-channel virtual surround systems currently doing the rounds.

The sense of space and width created by Ambisound is genuinely impressive, with those competent drivers forcefully throwing surround information either side of the listening position. We never felt as though effects were coming from behind us, but they felt detached enough from the front channels to make for a suitably engaging and immersive experience.


This is particularly true during ”The Matrix’s” electrifying lobby shoot out scene, with the HTS8100 firing out crisp, piercing gunshots left and right – all the while maintaining excellent separation of the front, centre and rear channels. The famous score underpinning the scene is delivered with verve and doesn’t get drowned out by the cacophony of effects surrounding it. 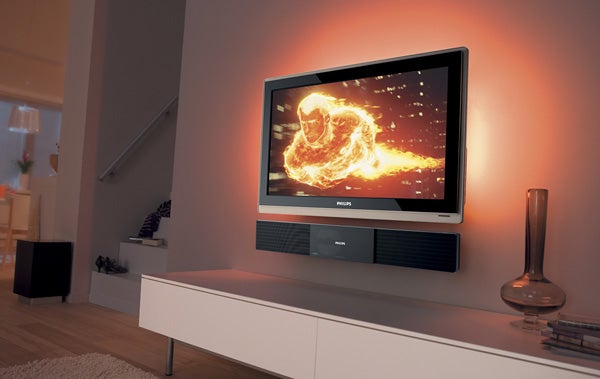 Also impressive is the subwoofer, which produces tight, solid bass that fuses beautifully with the Ambisound’s midrange and treble output. It doesn’t sound flabby or boomy like many other all-in-one subs, which means the other channels are never overpowered – it simply provides a solid foundation for those key action scenes. Dialogue, meanwhile, is clear, direct and stays locked to the centre of the screen.


As for pictures, the on-board 1080p upscaling is better than you might expect. Fine detail contained in ”The Matrix” disc is displayed with exceptional clarity, while competent handling of colours and blacks contribute towards some rich and cinematic looking images. Superb.


As soundbar cinema systems go, the HTS8100 is a fine example. The sound quality on offer is surprisingly sophisticated, and those angled speaker drivers do generate a genuine sense of width that sets this system apart from the virtual surround modes found in TVs and 2.1 systems.


But as impressive as Ambisound is, we wouldn’t recommend buying the HTS8100 if you can afford and accommodate a proper separates system. The rear effects don’t completely surround you as they do when using real surround speakers, so you’re not quite getting that true home cinema experience.


That said, we still think the HTS8100 is definitely worth checking out, not least because of its great feature list, effortlessly gorgeous design and solid picture quality.