Regardless of how you feel about 2.1-channel systems and how they compare with full 5.1, there’s no denying that they’re cooler than The Fonz in a freezer, and nobody makes them look groovier than Philips. The Dutch master has this unerring knack of creating two-channel systems that push all the right aesthetic buttons, making them the ideal accompaniment for similarly stylish flatpanel TVs in rooms with precious little space.


The last Philips system we investigated was the HTS6515, which made up for in style what it lacked in performance, but further down the range you’ll find this cheeky little number, which replaces Philips’ patented Ambisound surround-mimicking technology with Dolby Virtual Speaker.

In the box you’ll find a slim main unit with a built-in DVD/CD player and FM radio tuner, plus a compact active subwoofer and two square speakers, each mounted on a table-top stand. The main unit can also be placed on a stand – making it slope backwards to match the shape of the speakers – or you can mount them all on the wall.


Naturally the whole system is dressed in black, with the DVD unit boasting a gloss black front section that attracts fingerprints but looks gorgeous. What we love most about Philips’ systems is their innovative disc loading mechanisms, and the HTS4600 doesn’t disappoint – hit Open/Close and that large silver-rimmed circle on the front exits stage left to reveal the disc drive, then clip in your disc and away you go. To the left is another smaller circle, which contains an LED display that shows the crucial playback information.


Philips keeps things simple around the back with a modest selection of sockets. There’s an HDMI output, capable of zapping upscaled 1080p, 1080i or 720p signals to your TV, plus component and composite video outputs. There’s also a coaxial digital input that lets you listen to external audio sources through the system.


On the side you’ll find a USB 2.0 input for multimedia playback from flash memory devices, an MP3 Link port (which is just a fancy name for a 3.5mm analogue minijack) intended for MP3 players and a second minijack port for other devices.

The simple nature of the system means it doesn’t take long to rig up, and you don’t need the manual to get up and running. The subwoofer connects to the mains, while the DVD unit draws its power from the sub though a single proprietary cable, which means you don’t have to worry about placing it near a plug socket – particularly useful when wall-mounting. The speakers also connect to colour coded plugs on the back of the sub. 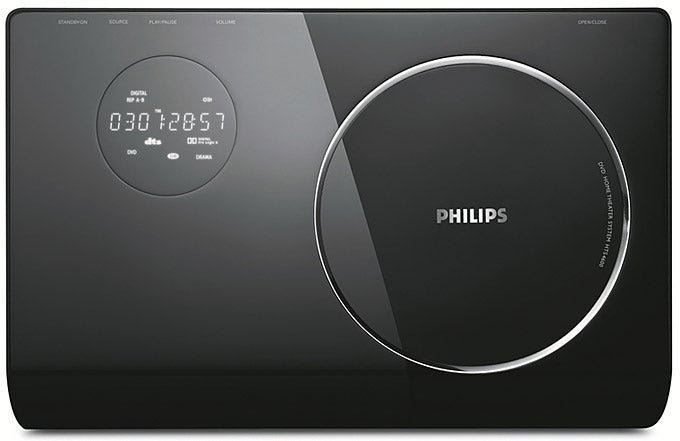 There’s a healthy array of features on board. The system decodes Dolby Digital and DTS soundtracks, and uses Dolby Virtual Speaker to mimic the characteristics of 5.1-channel audio. Dolby Pro Logic II processing is also on hand to expand stereo sources to 5.1 before Dolby Virtual Speaker works its magic. Eight EQ settings add a little extra spice to audio playback with names like Action and Gaming, but there’s no way of turning them off so you’ll have to find one that you like.


Format support includes DivX Ultra, MP3, WMA and JPEG, plus the surprising but welcome bonus of WMV playback. If you want to play any of these formats on the system, simply copy them to a USB memory stick or burn them to CD or DVD. The system accepts most kinds of recordable DVDs and CDs so there’s no worries on that score – but it won’t play DVD-RAM. 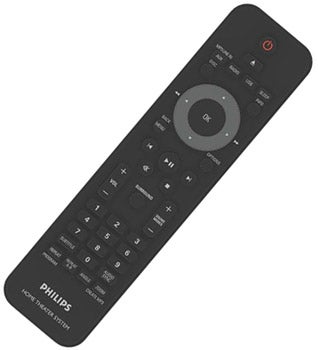 The HTS4600 uses the same user interface found on most other Philips systems, which is fairly basic in appearance but responsive and easy to navigate. The general setup menu is accessed by hitting the Options button, and from here you can change the HDMI output resolution, select from a range of picture presets (Bright, Soft and Personal, the latter allowing you to adjust brightness, contrast, tint and colour) and set an audio delay of up to 200ms.


The thoughtfully laid out remote makes menu navigation and playback control feel instinctive and the buttons are well signposted. There are also dedicated buttons to switch between sources and to change the audio mode.


Although the power output rating of 300W probably won’t earn you a visit from Environmental Health, it’s more than enough for small rooms and on the whole the system does a good job with movies, with one or two caveats.

We took it for a test drive with ”Fantastic Four” on DVD and it delivers the film’s big action sequences with sharpness and dynamism. During the fire engine rescue scene on the bridge for example, the dramatic score is delivered with pace and urgency and the effects sound lively. Trouble is, you have to crank it up to near maximum to create an impact, and when you do, everything starts to sound a bit harsh. What’s more, the subwoofer’s anaemic bass output leaves the bottom end sounding thin, and the lack of channel level controls means you’re stuck with it. More evidence of this comes in the scene where Ben Grimm stomps into a bar and falls off a stool – the thuds lack the power needed to make them really resonate.


Dialogue is clean and life-like, plus Dolby Virtual Speaker does a good job of relocating speech between the two speakers. It also expands the surround effects across the soundstage well, but you need to sit in the narrow sweet spot to get the full benefits and the effects don’t emerge from behind you as they would with a full 5.1 system. 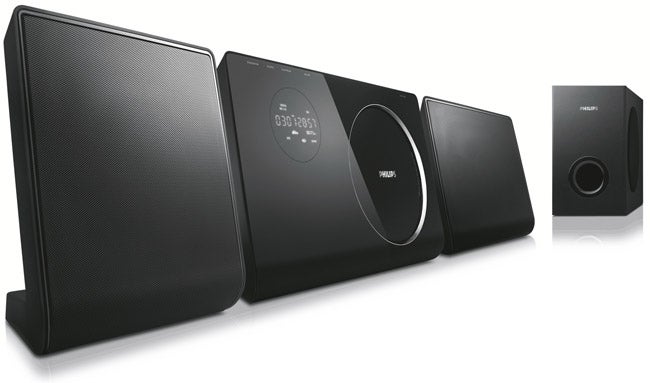 Despite our reservations over sound quality, the system’s 1080p pictures are superb. ”Fantastic Four’s” bright comic-book colour palette is handled with pleasing warmth and vibrancy without looking unnatural, while human skin tones look convincing. Crisp detail reproduction, solid blacks and smooth, tightly-contained edges give the image pleasing clarity and depth, plus it retains a healthy amount of detail during dark scenes.


A cursory check of all the supported formats reveals no problems, with DivX, WMV and XviD videos playing back smoothly and MP3/WMA tracks sounding clean and punchy. CD playback is slightly disappointing though, with plenty of treble and bass but not much to balance it out in the midrange. We’re being picky though – for everyday music playback it’s more than adequate.


This system’s mega-stylish looks make it a gorgeous focal point for any living room, and on that basis it’ll fly off the shelves no matter how good its performance is. But if you like a bit of substance behind the style then there are better sounding 2.1-channel systems out there, with the Philips lacking a bit of oomph in the bass department and sounding a bit harsh at high volumes. But if you’re willing to tolerate that, then its sub-£200 online price tag, solid build quality and decent feature list (including 1080p upscaling and DivX/WMV playback) make the HTS4600 feel like very good value for money indeed.