Despite being launched under the Philips brand name, this Freeview HD recorder was actually designed by Pace, who launched the UK’s first ever twin-tuner Freeview PVR (the Pace Twin) and also makes the Sky+HD box – surely a good omen. This 500B, twin-tuner hard-disk recorder can be found online for around £220, which makes it much cheaper than the similarly capacious TVonics DTR-HD500 we reviewed last week.

Its external design is excellent. While not as snazzy or radical as the DTR-HD500, the HDT8520’s build quality is a cut above the usual Freeview receiver fare. It’s weighty, solidly bolted together and features a gorgeous brushed top panel. And while the black box shape could have been rather dull in the wrong hands, here it gives the unit a distinctive coolness that sets it apart from rivals.


We also like the little row of buttons along the left of the front panel, the dot matrix display in the middle that shows the channel name and number, plus the blue ‘HD’ icon that lights up when you’re watching a hi-def channel. The only aesthetic faux pas is the glaring white light that runs around the front and sides, which mercifully can be turned off.

On the rear panel is an adequate selection of sockets, including that all-important HDMI output, but it’s a shame there are no HDMI inputs as found on the TVonics recorder. That means you can’t use the Philips as a switcher, but even more disappointing is the news that you can’t use either of the unit’s two USB ports (on the back and side) for digital media playback – they’re for software updates only, which is a missed opportunity. There’s also an Ethernet port that currently serves no purpose, although it could facilitate IPTV services in the future. Completing the line-up are aerial input and loopthrough, optical and coaxial digital audio outputs, analogue stereo output and a Scart output, which only outputs TV pictures and not any of the unit’s menus (the screen goes black when you access the setup menu).

The big attraction behind this unit is its ability to receive and record hi-def channels, and with a 500GB hard disk you can store a lot of them – almost 130 hours’ worth, to be precise, or 259 hours of standard-definition programmes. Inside the box are two DVB-T2 tuners, which allow you to record one channel while watching another, and as a welcome surprise you can even record two channels while watching a third.


And like any good PVR, the HDR8520 offers all those essential tricks that most people can’t live without these days, such as pause/rewind live TV and the ability to watch a programme from the start while it’s still being recorded. When live TV is paused, the ‘time shift bar’ appears and helps you keep track of where you are, while functions like Instant Replay and Commercial Skip let you jump backwards and forwards in 15 or 30 second chunks. You can scan at x4, x32 and x128 or watch in slow-motion. The buffer holds three hours of programmes, and a handy list shows you the names of programmes stored within it.

There’s also an attractive, colourful eight-day EPG, which shows eight channels at a time and scrolls titles that are too long to fit into a programme ‘block’. The colour-coded keys at the bottom let you move around the grid quickly – including a novel feature that jumps to six o’clock in the evening on any given day – plus the EPG makes it very simple to record programmes or change to a certain channel (just hit Record or OK respectively). Unlike some EPGs, you can’t continue watching live TV as you browse but that’s its only real shortcoming. 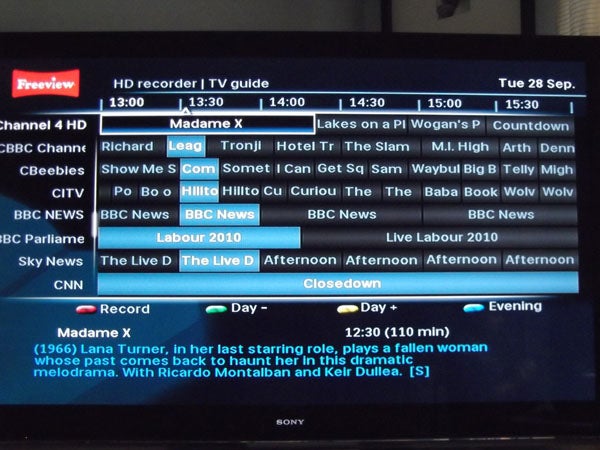 The unit’s Freeview+HD badge means it also features series link, which is activated from a dialogue box that pops up when you select something to record from the EPG. There’s no sign of the trailer recording or recommendation technology found on the TVonics though. 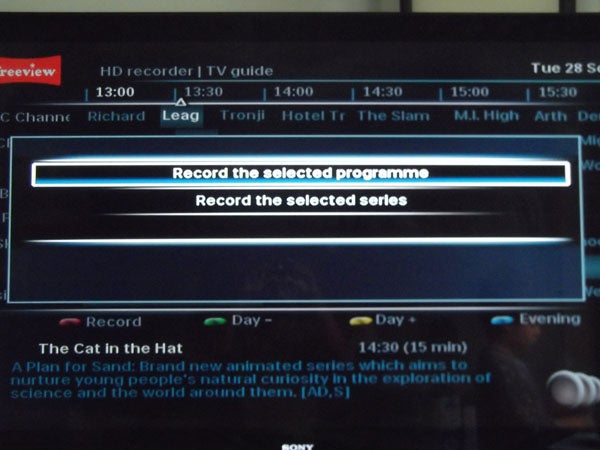 All of the onscreen menus and dialogue boxes are clear and written in plain English, helping you resolve schedule conflicts and manage channel lists easily. Particularly helpful is the Record Management box that appears in the bottom left corner of the screen when you hit record – it shows you which channels are being recorded and gives you the chance to stop it or add a 10min buffer to the end. 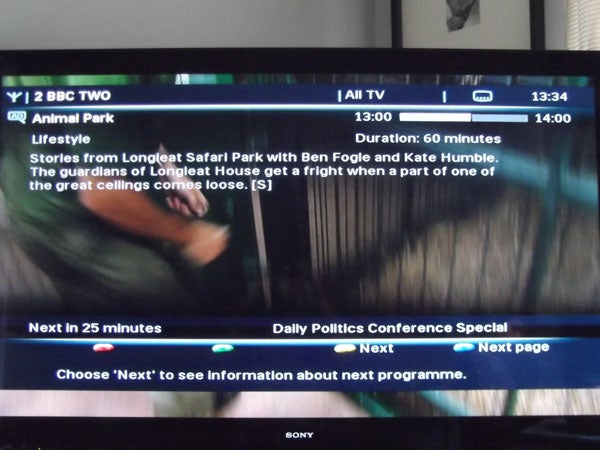 The onscreen programme info banner lacks the same flexibility as other Freeview HD boxes, such as the TVonics DTR-HD500. You can surf through every channel using the up and down keys, but for each one it only shows you what’s on now and next (plus how long there is until the next programme starts). Hit the Info button again and a synopsis of the programme appears, but if you want to browse any further than the next programme you’ll need to enter the full EPG. 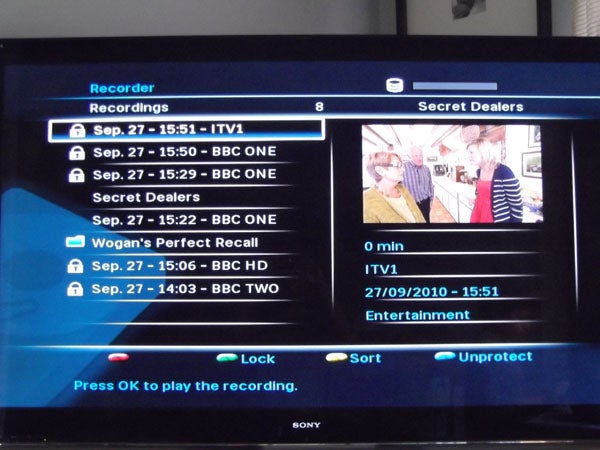 The recording library is a smart, functional menu that lets you find recordings with ease. It’s accessed using an inconspicuous button on the remote, and comprises a basic list down the left of the screen and a thumbnail on the right with all the details about the recording. Multiple recordings of the same programme, including series linked recordings, are grouped together in a folder to prevent clutter. You can sort, protect and lock each programme, but there are no editing tools. When you select a recording that you’ve partially watched before, the unit asks if you want to resume playback.

Setting up the unit is a breeze, as the crucial settings are handled when you first turn on the machine. This initial setup process asks if you want to turn on portable antenna powering, asks for the aspect ratio of your TV and then launches into channel tuning, which is carried out quickly and finds the correct regional variations based on your postcode. Any other changes are made in a clear, logical setup menu, and options include HDMI output resolutions (576i up to 1080p), which can also be changed using the RES button on the unit’s front panel. 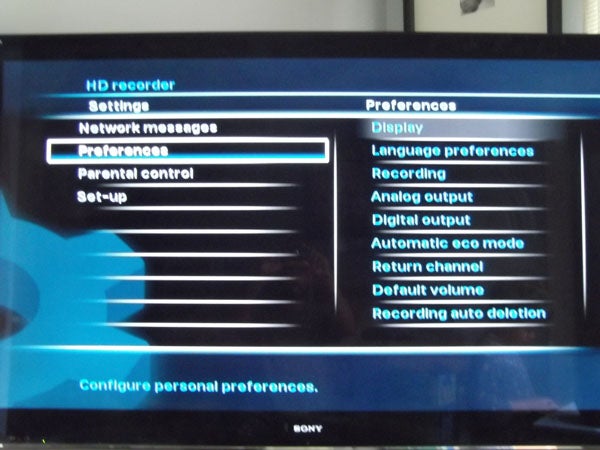 The only setup sticking point concerns audio output. The unit cannot transcode HE AAC into Dolby Digital, which means that the Dolby Digital option may cause problems when selected. Pace is working on a fix for this, which will be included with a bunch of other upgrades available ‘later this year, probably not before November’, but until then it’s best to keep the output set to PCM (stereo).


In general, the HDT8520 is a smooth operator. Channels change with only a momentary black screen, digital text is super speedy and the menu cursor moves around with satisfying alacrity. The remote boasts a superb layout too, with rubbery, tactile menu controls, intuitive button placement elsewhere and foolproof labelling. 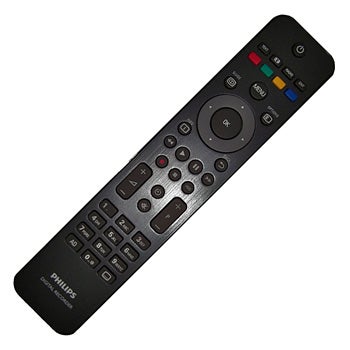 The HDT8520 is a superb picture performer, skilfully side-stepping the noise problems that beset the TVonics DTR-HD500. First off, high-definition channels boast illuminating clarity thanks to the crisply defined detail, which doesn’t suffer any degradation when converted from 1080i to 1080p. The procession of programmes on the BBC HD Preview looks absolutely gorgeous – from the intricate archaeological detail of Pompeii to the stunning vistas on show in ”Helicopter Heroes”, the Philips box delivers all the razor-sharp detail and effulgent colours with aplomb. These qualities are preserved perfectly when recorded onto the hard disk. HD images lose none of their sharpness or depth, and artefacts are kept at bay.

Even standard-definition broadcasts look impressive on our 60in Sony set, whether the box’s HDMI output is set to 576p or 1080p. Programmes like ”Loose Women” (ITV1), ”Homes Under The Hammer” (BBC One) and ”The Good Wife” (Five) are reproduced without the abundance of shimmery mosquito and block noise seen on some other Freeview boxes. That’s not to say that it’s completely free from artefacts but the HDT8520 seems to tame it better than the TVonics recorder, for example. Philips’ pictures are clean and more stable, and are captured on the hard disk as such. As for sound, the stereo PCM output via HDMI or S/PDIF is clear and dynamic.


Despite the lack of alluring features like USB media playback or HDMI switching, the HDT8520 remains a very likeable Freeview HD PVR. It’s well made, the operating system is slick and easy to use, there’s a sizeable hard disk on board and a healthy amount of recording functionality to go with it. We’re also impressed by its picture quality, which is cleaner and more stable than expected. At over £200, the price tag may seem steep to some buyers, but it’s cheaper than both the Humax HDR-FOX T2 and the TVonics DTR-HD500, a fact that will hold the Philips in good stead among budget-conscious buyers.