Call me fickle or easily bored, but I’m looking forward to the day when I’m asked to recommend a cheap, no-nonsense, miniscule MP3 player and I can’t instantly recommend the Sansa Clip. Frankly, I’m tired of saying it. Why can’t someone – even Sandisk – come along and kick it off its bargain-basement pedestal? Sadly, with no new models in Creative’s range of late and only the odd damp squib from Sony and Samsung, I’m beginning to despair of such a thing happening.


Of course, we now have Apple’s latest and most controversial Shuffle (to be reviewed as soon as Apple gets us one), but my brightest new hope is the Philips GoGear SA2940, cheerfully dubbed the ‘Spark’. This is the successor to the GoGear SA2840, which at the time we believed was a fine alternative to the Clip if you wanted more capacity. These days, of course, you can just get a Clip with more flash memory, but luckily Philips hasn’t been caught sitting with its thumb up its collective posterior; the SA2940 addresses some of the complaints we had about its predecessor, and adds a handful of new features to boot. 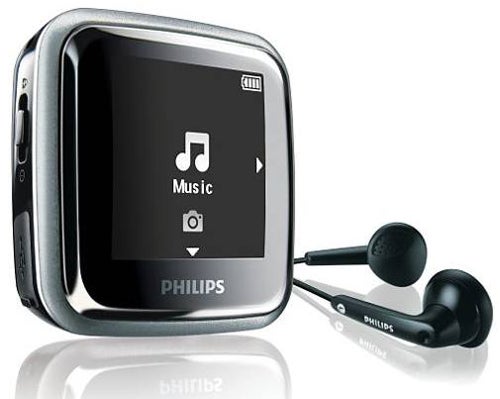 Physically, the unit is much the same; a simple, compact, square box approximately 4.5cm on either side and around 1cm thick, with a plastic but reasonably robust feel. The whole design is dominated by a 1.5in, 128×128 pixel OLED screen, and this cleverly doubles as a display and control pad, tilting and clicking in four directions to handle all the major navigation controls. As a rule, clicking up and down cycles through the available items or options, clicking right selects, plays or pauses and clicking left takes you back a step.


Combined with a no-frills, no-fuss, text-based interface, it makes the GoGear Spark one of the easiest small players to handle, and the only physical buttons are for volume and power/hold. Memory-key sized players like the Samsung YP-U4 or Sony NWZ-B133 might be smaller, but the Spark wins on usability, and it’s great to see that many of the little features you wish were supported by other players – on-the-fly playlist additions, the ability to change sound settings from within a song – are present and correct.

Probably the biggest change from the previous model is the adoption of a colour screen. Don’t get too excited; you won’t be watching video on it, and it’s no better than the display on an average, budget mobile phone, but it’s still pretty good for a player this small and this cheap. Large text and a chunky font mean that you still have to put up with a lot of scrolling text when you’re navigating through albums or playlists, but the screen does have other practical uses.


First, it can now display album art during playback – not vitally important, but a nice touch. Second, it allows the Spark to double as a tiny JPEG photo viewer. Thanks to the small size and low resolution you won’t want to share a whole album of holiday snaps this way, but the colours are reasonable and you can set the images to rotate in a basic, no-transitions slideshow. Finally, you can also use the player’s Personalize feature to set images for the wallpaper and the startup/shutdown sequences.


Addressing another complaint of our SA2840 review, the Spark comes with a protective silicon pouch and detachable clip, allowing you to hook the player on your clothes or belt if you’re doing something active. And if you like hiking or long-distance running, you’ll have no issues with the battery life. The Spark is rated for 27 hours, and the test sample left running overnight certainly came within 30 minutes of that at medium volume levels. 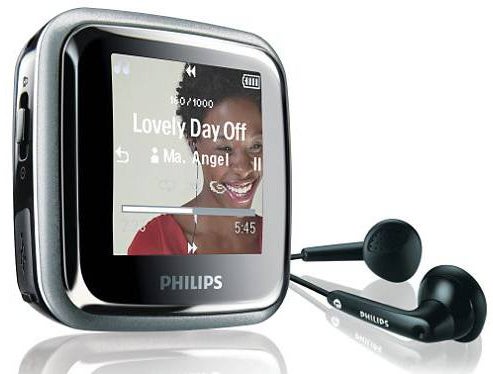 Otherwise, Philips has played smart and not overloaded the Spark with additional features. There’s a basic but decent voice-recorder, though like a lot of small, budget players it’s prone to accentuating handling noise, and there is a model available with an FM radio receiver. At heart, however, this is a music player, through and through.


The stripped-back approach also applies to software. We get no media player or file transfer applets to ignore, just a simple firmware updater, leaving you to drag and drop tracks or sync with Windows Media Player just like most sensible souls already do. My only minor grumble about this ‘less is more’ approach is that it extends even to file format support as well. While players like the Sansa Clip and Samsung YP-U4 are embracing OGG and even FLAC, the GoGear Spark just does your vanilla MP3, WAV and WMA.


Okay; let’s talk sound quality. The GoGear Spark comes bundled with a pair of fairly basic earbuds, and while these aren’t as bad as, say, the standard iPod ‘phones, they do produce the sort of sound that’s big on high-end clarity, but not so big on warm tones, low-end detail or bass. In fact, listen to any decent rock or dance/electronica track, and you’ll soon note how thin and clattery the drums sound, and how weak and limited the bass is.

Philips has made up for this by including a sound enhancement feature – Fullsound – which is supposed to ‘faithfully restore sonic details to compressed music.’ Whether it does or not, it certainly beefs up the low end, widens the sound stage and adds some much needed body to the mid-range. The combined effect is that the sound through the bundled headphones is just about good enough for me to rock out to Soundgarden’s mighty A-Sides compilation or chill out to the piano/bass/drums interplay of Bill Evans’ classic Portrait in Jazz. It’s hardly Hi-Fi, but it’s listenable.


The effects of Fullsound change, however, as you move up to pricier ‘phones. With cheap upgrade in-ear models, like Creative’s bargain-tastic EP630s, there are still benefits, but switch up to more expensive in-ear models or over-the-ear favourites, and the enhancement starts to muffle detail rather than reveal it. And while you can switch Fullsound for a range of preset EQ settings or your own custom EQ, the effects can be a bit crude. Since when has Rock meant: ‘set bass to stun and stuff the rest?’ Left untouched, the sound from the GoGear Spark is perfectly decent, handling slick, well-engineered pop and commercial rock better than dense electronica or heavy rock, but it’s a solid, not spectacular performer. 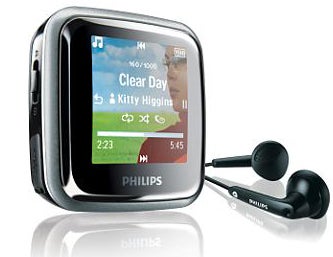 In fact, I’d go so far as to say that the GoGear Spark still loses out to the Sansa Clip overall because the latter seems to have more headroom when you go beyond the bundled earbuds. The SA2940 can go louder than the SA2840, and the player’s grasp of dynamics is improved partly as a result, but Sandisk’s little champ still performs better.


Don’t get me wrong; put the Spark through a pair of Grado SR60s and the sound is very likeable, but the clarity and dynamics aren’t quite there. Listen to, say, Notion from Kings of Leon’s Only by the Night and the chiming riff has less punch and the vocals less power. With Ralph Vaughan-Williams’ The Lark Ascending – a piece that relies on contrasting tones and subtle swellings of volume – the Spark doesn’t quite have the subtlety to scope.


This isn’t a disaster. If you want a cheap, take-anywhere player that you’ll use with some equally cheap, take-anywhere headphones, the Spark has a lot going for it. If you prize style, solid built quality, good battery life and a decent screen over value for money and sound quality, then the Spark is an excellent buy, However, if you’re looking for a cheap, bargain-basement player to team with not-so-cheap headphones, then the Sansa Clip is still a much better bet. Damn; foiled again. The GoGear Spark might be a decent alternative to the Clip, but it’s not quite the player to supersede it.

A convincing challenger for the Sansa Clip, and one that works hard to produce decent results from budget headphones. However, neither audio quality nor value is quite good enough to bring down Sandisk’s bargain-basement champ.